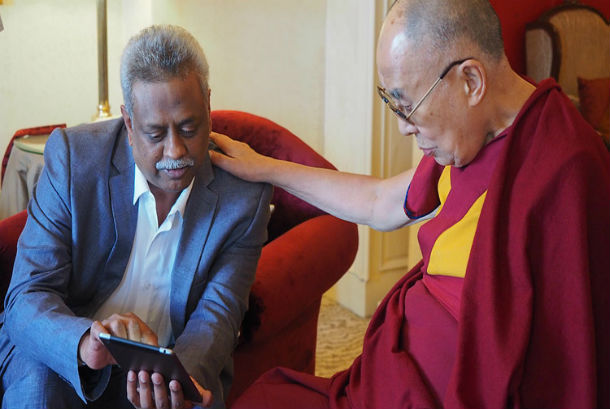 Bengaluru, Karnataka, India — Before His Holiness the Dalai Lama went out Monday morning, filmmaker Bharath Subbarao and his wife Soumya introduced him to ‘Mandala’, a newly launched app dedicated to bringing Buddhist wisdom and the best insights of psychology together in a clear and accessible way so that people may apply them in their everyday lives.

The app is introduced and guided by Thupten Jinpa, a former Buddhist monk who completed his training as a Geshe Lharampa at Ganden Monastery and went on to earn a BA in philosophy and a PhD in religious studies at Cambridge University. He has served His Holiness extensively as a translator since 1985 and has translated and edited numerous books by him.

His Holiness was pleased to see that guidelines to help people find peace of mind and develop a warm heart could be made so easily and clearly available to them, according to a report, which is posted on the official website of His Holiness the Dalai Lama.

The app, which is presently available in English, French, Spanish, Russian and Chinese, offers talks and conversations that bring together Buddhist wisdom and scientific insights under the heading Learn. Well-known scientists and writers like Daniel Goleman contribute. Under the heading Live, are a series of guided meditation practices, while there is also an option to discover and delve further into key Buddhist concepts under the heading Explore.