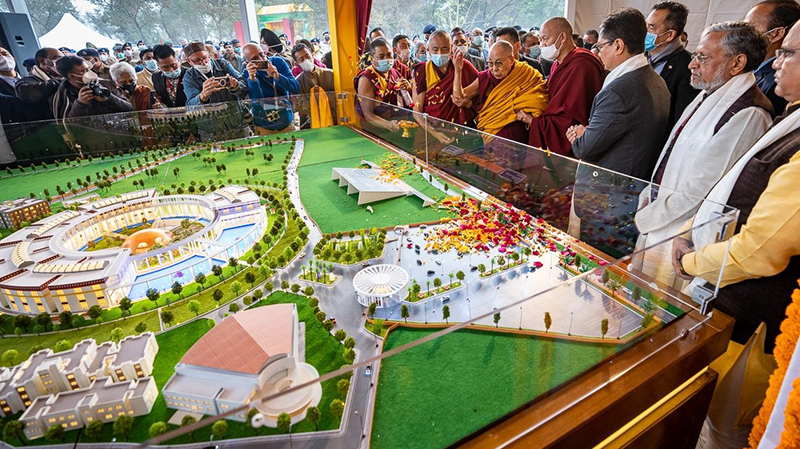 His Holiness the Dalai Lama laid the Foundation Stone of the Dalai Lama Centre for Tibetan and Indian Ancient Wisdom in Bodhgaya, Bihar, India on January 3, 2023. Photo: Tenzin Choejor

Bodhgaya — His Holiness the Dalai Lama laid the foundation stone of the Dalai Lama Centre for Tibetan and Indian Ancient Wisdom in Bodhgaya on Tuesday and he said, “India is a land where, because of the fundamental and long-standing traditions of ‘karuna’ and ‘ahimsa’, many different spiritual traditions flourish. To ensure peace in the world we need to encourage the notion of non-violence or doing no harm— ‘ahimsa’. Tibetan refugees are fortunate to have been able to come to live in a land that explicitly upholds ‘ahimsa’.

Interim director of the project, Tempa Tsering, greeted everyone present and welcomed the special guests. He announced that the Centre was being established to fulfil His Holiness the Dalai Lama’s vision that if awareness of ancient Indian wisdom, particularly with regard to the workings of the mind and emotions, could be revived and shared more widely, it would contribute to the creation of a more peaceful, more compassionate world. He expressed gratitude to the Government of Bihar and the Government of India for their support. He declared that the Centre will be open to everyone who wishes to learn about Tibetan and Ancient Indian Wisdom.

In a speech delivered in Hindi, Prof Samdhong Rinpoché recalled that many years ago Vinobha Bhave suggested that a time would come when Indian culture would take a leading role in the world. His prediction was widely dismissed, but in retrospect it seems he was a far-sighted visionary. Rinpoché went on to say that since the materialistic outlook associated with science and technology has failed to bring peace and satisfaction to the world, ancient Indian knowledge and values may fill the gap.

In the past, Rinpoché asserted, Indian schools of thought were mutually enriched when they engaged in an exchange of ideas founded on reason and logic. Tibetan tradition has kept this approach alive. With the establishment of this Centre, these traditions will be restored to India.

Kumar Sarvjeet, MLA for Bodhgaya and Minister of Agriculture in the Government of Bihar spoke next on behalf of the Chief Minister, Nitish Kumar. He informed the gathering that the Chief Minister is completely supportive of His Holiness’s vision. He has made clear that he and the Government of Bihar will do whatever they can to help bring the project to fruition. He disclosed that the Government and people of Bihar, and the local people especially, are grateful that the Centre is being established in Bodhgaya.

Hon’ble Kiren Rijiju, Minister for Law and Justice in the Central Government, who hails from Arunachal Pradesh, paid his respects to His Holiness, the Sakya Throne-holders and other honoured guests. He stated that whenever he comes to Bodhgaya and reflects that 25 centuries ago the Buddha actually walked in this locality, he feels at peace. This is what makes Bodhgaya a sacred place and now His Holiness reinforces that status by his presence. The Buddha showed the world how to attain enlightenment and, in our time, this is what His Holiness does too.

“His Holiness has made India his home and has committed himself to helping to revive awareness of ancient Indian wisdom,” he said. “People from around the world come to India to pay their respects to him. His Holiness refers to India as the guru and Tibetans as the students, but I say that it is he, an apostle of peace, who is the guru to world. On behalf of the people and government of India I express gratitude to him. It’s a privilege for us to have him among us here in India," he said.

“I am honoured to have been able to take part in laying the foundation stone for this Centre for Tibetan and Ancient Indian Wisdom. His Holiness states that the wisdom of Nalanda nurtured by such masters as Nagarjuna, Aryadeva and Chandrakirti, a tradition grounded in reason and logic, was kept alive in Tibet. It was concerned less with religion and more with a science of the mind. A centre to study along these lines is being established and people from around the world will be able to come and study here," the minister added.

“His Holiness is committed to extolling such human values as compassion and tolerance, forgiveness and self-discipline. He is pledged to work to preserve Tibetan culture and protect the natural environment of Tibet," he said.

“The Government of India is committed in turn to supporting this centre, which will encourage us to look within. The Centre will be a world-class institution, a gift to humanity, where it will be possible to discover the link between peace of mind and world peace,” Hon’ble Kiren Rijiju said.

Then His Holiness the Dalai Lama said, “Today, we are all gathered here out of our admiration for the Buddha’s teaching,” he observed. “We all wish for peace, so we need to cultivate compassion and the practice of doing no harm. The Buddhadharma not only reveals peace and happiness to the world, it shows us how to overcome suffering.

“Indulging in wishful thinking is not enough, we have to look at the causes of suffering, which are rooted in our self-cherishing attitudes and destructive emotions, and put an end to them. Peace in the world depends on individuals achieving peace of mind.

“Shantideva has made the situation abundantly clear in his work, ‘Entering into the Way of a Bodhisattva’

Why say more? Observe this distinction: between the fool who longs for his own advantage and the sage who acts for the advantage of others. 8/130

For those who fail to exchange their own happiness for the suffering of others, Buddhahood is certainly impossible - how could there even be happiness in cyclic existence? 8/131

Proceeding in this way from happiness to happiness, what thinking person would despair, after mounting the carriage, the awakening mind, which carries away all weariness and effort? 7/30

“If you are warm-hearted and determined to help others, it will make you happy. Therefore, we can be grateful to the Buddha for his teaching.” His Holiness continued.

“India is a land where, because of the fundamental and long-standing traditions of ‘karuna’ and ‘ahimsa’, many different spiritual traditions flourish. To ensure peace in the world we need to encourage the notion of non-violence or doing no harm— ‘ahimsa’. Tibetan refugees are fortunate to have been able to come to live in a land that explicitly upholds ‘ahimsa’.

“I don’t have much more to say. I thank the Government of Bihar and the Central Government for their support, without which it would be difficult to bring this project about. We are grateful.

“We need to think of the welfare of others and continuously cultivate a warm heart; to be of service to others is a practical and realistic way to lead our lives. Thank you,” His Holiness the Dalai Lama concluded.

Karma Chungdak offered words of thanks. He first of all expressed gratitude to His Holiness for inspiring the establishment of this Centre for Tibetan and Ancient Indian Wisdom and for taking part in the laying of the foundation stone today. He thanked representatives of Tibet’s several spiritual traditions, monks and nuns, for their attendance. Finally, on behalf of the Dalai Lama Trust, he offered thanks to Hon’ble Kiren Rijiju, for representing the Government of India, and Kumar Sarvjeet, for representing the Government of Bihar, as well as Sikyong Penpa Tsering and Speaker Khenpo Sonam Tenphel, for representing the Central Tibetan Administration, on this great occasion.