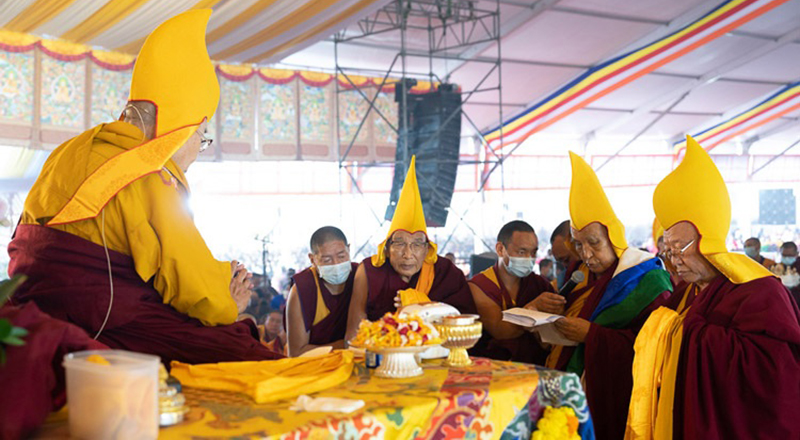 Gaden Tri Rinpoché reading a tribute reviewing His Holiness the Dalai Lama’s life and requested him to live long during the Long Life Prayer at the Kalachakra Teaching Ground in Bodhgaya, Bihar, India on January 1, 2023. Photo: Tenzin Choejor

Bodhgaya – A long life prayer offered to His Holiness the Dalai Lama by Buddhists and he said, “People in Tibet are facing difficulties, but it is the people of the Three Provinces—Amdo, Kham and U-tsang—, the Himalayan Regions, as well as Mongolia, Kalmykia, Buryatia and Tuva, who most fervently pray for me to live long. These heartfelt wishes will bear fruit. I am determined to live for a long time and in my dreams I have had indications that I will live to be more than 100.”

His Holiness the Dalai Lama, spiritual leader of Tibet, is offered a long life prayer by the International Geluk Foundation, representing the entire Geluk tradition, on January 1, 2023 at the Kalachakra ground in Bodhgaya, Bihar, India.

The long life prayer ceremony was based on ‘offering to the spiritual master’ (Lama Chöpa). Gaden Tri Rinpoche, Sharpa Chöje and Jangtse Chöje presiding over the ceremony were seated facing His Holiness the Dalai Lama. The ceremony began with chanting of prayers by over 16,000 monks and nuns, many of whom came from the Himalayan regions.

After done with prayers, His Holiness the Dalai Lama said to the gathering: “It so happens that today, on the first day of the new year of the common calendar, we are gathered in this sacred place where monks from the three great seats of learning, Ganden, Sera and Drepung, are offering prayers. We are also joined by masters of the Sakya, Nyingma and other traditions. It is because the interdependence between us that we have gathered here on this occasion.”

His Holiness added by saying, “As for me, I am determined to continue to serve the Buddha dharma, especially the Tibetan Buddhist Tradition, until I’m at least 100 years old. As you know, I am driven by the following prayer:

For as long as space endures
And for as long as living beings remain,
Until then may I too abide
To dispel the suffering and misery of the world.

“People in Tibet are facing difficulties, but it is the people of the Three Provinces—Amdo, Kham and U-tsang—, the Himalayan Regions, as well as Mongolia, Kalmykia, Buryatia and Tuva, who most fervently pray for me to live long. These heartfelt wishes will bear fruit. I am determined to live for a long time and in my dreams I have had indications that I will live to be more than 100. The karmic connections between us serve as conditions for this to come about,” the spiritual leader of Tibet said.

“We have gathered here, not to picnic and have a good time, but to lay the foundation for study, reflection and meditation in order to be able to practice the Three Higher Trainings year by year,” His Holiness mentioned.

His Holiness remarked that Buddhism that began as an Asian tradition now attracts interest from around the world. Scientists in the West, but also in China, are keen to explore what it has to say about the workings of the mind and emotions. China, he said, has traditionally been a Buddhist country, but under the communist system the authorities have sought to undermine it. However, of late, popular interest in Buddhism has been growing. He suggested there are signs that things may be changing that will lead to a better world.

“I am well, my brain is sharp and alert. I am still able to smile and will continue to do so for years to come,” His Holiness declared.

“You too should feel happy and determined to continue your practice of the Dharma. We Tibetans and our neighbours have followed the Nalanda Tradition since Shantarakshita came to Tibet. Let’s pray that this tradition will flourish far into the future,” the Buddhist leader said.

“I have done my best. People all over the world have become familiar with the name of the Dalai Lama. They know what I have to say about peace and compassion and I intend to continue to talk about these qualities for another 15 years or more,” His Holiness the Dalai Lama said.

“I reflect on the awakening mind of bodhichitta and the meaning of emptiness whenever I can. And although Tibet, the Land of Snow, has undergone tremendous tragedy, one of the positive consequences has been that people have become aware of our culture and traditions. There is now a wider acknowledgement that Tibetan Buddhism is part of the treasure of humanity,” he added.

“That we have gathered here today at the start of a new year seems to be an indication that things are changing for the better. Please pray that all will be well. Tashi Delek,” His Holiness the Dalai Lama concluded.