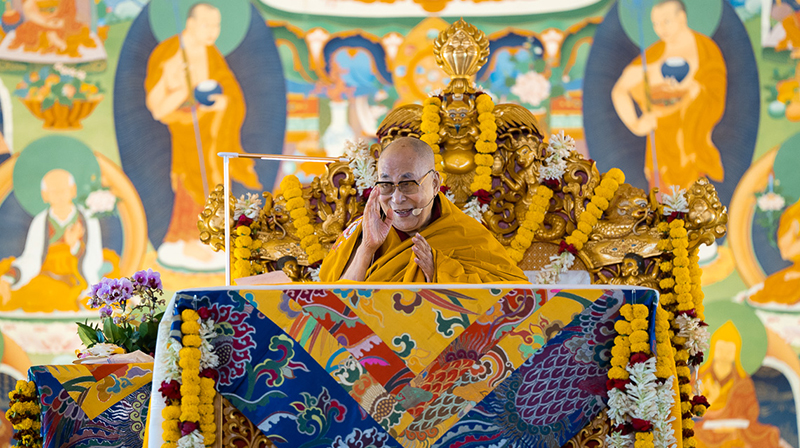 Bodhgaya – His Holiness the Dalai Lama gave a three-day teaching to thousands of devotees in Bodhigaya and said, "The practice of bodhicitta is the essence of all the Buddha's teachings. The practice of bodhicitta leads to a healthy and happy mind and a long life. We must remember that the eight billion human beings living today wish to be happy and avoid suffering.”

His Holiness the Dalai Lama gave a three-day teaching on Nagarjuna's Commentary on Bodhichitta and conferred the blessing of the 21 Taras on the last day, to 6,5000 people from all over the world, at the Kalachakra Teaching Ground in Bodhgaya, Bihar, India, from 29 to 31 December 2022.

His Holiness the Dalai Lama begins his teaching by saying, “Today, in this special place where the Buddha attained enlightenment, I would like to hold a ceremony for generating the awakening mind of bodhichitta and taking the Bodhisattva Vows. This, the Seat of Enlightenment, is the most sacred of the sites associated with the Buddha. Elsewhere he taught the Four Noble Truths and the Thirty-seven Harmonies of Enlightenment, but here we are reminded of the essence of all his teachings, which is to discipline the mind for the benefit of sentient beings extensive as space.”

“I generate bodhichitta every day, cultivating a concern for the welfare of others. The more you become acquainted with such motivation, the more you will find you hold others dearer than yourself. In this way you will realize self and others are interdependent,” His Holiness continued.

“Since I received the transmission of ‘Entering the Way of the Bodhisattva’ (Bodhicharyavatara) I have engaged in the practice of equalizing and exchanging self and others every day. Doing so is a source of true happiness. The practice of bodhichitta is the essence of all the Buddha’s teachings. With this in mind we need to remember that all 8 billion human beings alive today wish to be happy and to avoid suffering. As far as this is concerned, we are all the same. Once you have developed bodhichitta, you will find unfavourable circumstances become favourable,” he added.

“Listen to and study the Buddha’s teachings. Reflect on them over and over again, then meditate on what you have understood. Be determined to work for the welfare of others. This is how you will reach the domain of the enlightened ones. If you have bodhichitta within, you’ll be at peace,” His Holiness said.

“I have been given this flame from Hiroshima, which was the first place on which an atomic bomb was dropped and so very many people perished. I have been there, heard about those who died and met survivors whose health was frail. Thinking of them all I felt immensely sad. I thought how good it would be if the world were free from nuclear weapons, which are something I have deeply, prayed for,” His Holiness said on the second day of the teaching.

“Even now war goes on and weapons are being used by one side against others. Although nuclear weapons have not been employed since the bombing of Japan, too many countries wish to possess them. Today, in this sacred place of Vajra-asana, we have here a flame of hope and an opportunity to pray for lasting peace in the world,” he added.

“There may be no immediate danger of a wider war breaking out, but we all face the threat of the Covid pandemic. This is a serious risk and we should all pray for the pandemic to subside. As human beings we are all subject to the sufferings of birth, aging, sickness and death. Let’s pray together that as far as the pandemic is concerned, we may soon find relief,” His Holiness said.

“Tibetans have been cultivating bodhichitta since the time of the religious kings when Shantarakshita was invited to Tibet. If your mind is relaxed and at peace, as a result of developing the awakening mind of bodhichitta, you will find you enjoy good physical health and sound sleep. You will be happy day and night,” the spiritual leader of Tibet said.