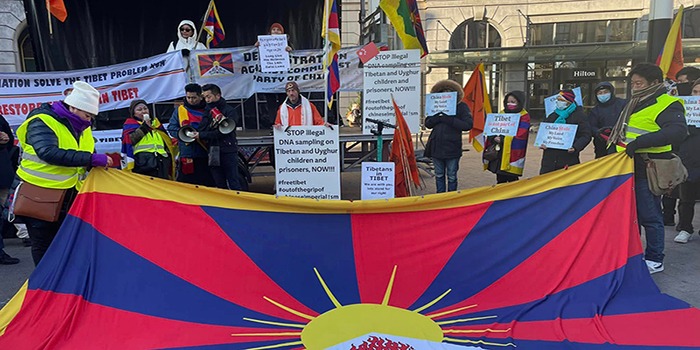 Brussels — Tibetan activists from the Regional Tibetan Youth Congress in Belgium organised a protest against China and its hard-line policy towards Tibetans. They called on China to stop the illegal collection of DNA from Tibetan and Uighur children. The activists said, "China stole my land, my voice, and my freedom."

The Regional Tibetan Youth Congress (RTYC) in Belgium staged a peaceful protest aganist China in Brussels, Belgium, on December 17, 2022. While protesting, the activists shouting slogans such as, "China stole my land, my voice, and my freedom, stop illegal DNA sample on Tibetan and Uyghur children and prisoners in Tibet."

The Tibetan activists also called on United Nations to solve Sino-Tibet issue and restore of freedom in Tibet. They demanded human rights in Tibet, and said, “China has killed 1.2 million Tibetans and destroyed 6,000 monasteries. Tibet's environment has been polluted and cultural genocide continues in Tibet. We call on China to end the genocide in Tibet and to release those Tibetans who have been arrested and sentenced years in prison merely for exercising their basic human rights. Tibet is for Tibetans, Tibet is never part of China, Tibetan in Tibet, we are with you, let’s stand for our right.”

President of RTYC said, “We are protesting here because our Tibetan brothers and sisters in Tibet are facing difficulties in the name of covid-19 policies, they are expressing their distress in videos on social media, we are expressing our solidarity with them.

One of the protestor said that, this week is Human Rights Week and reflects the human rights issues faced in Tibet over the past seventy years. The number of human rights violations in Tibet is the highest since China invaded the country in 1949. Many Tibetans and their leader, His Holiness the Dalai Lama, have been forced into exile. Those Tibetans who remain in Tibet are denied freedom of religion and freedom of expression. Those who have exercised their freedom to express their human rights have been arrested and sentenced years in prison on various accusations.

“The Chinese government's oppression goes even further by separating Tibetan children from their parents at the age of four and placing them in colonised boarding schools, where only Chinese language and thoughts are taught. Don't forget that the world's youngest political prisoner is a Tibetan child, the 11th Panchen Lama of Tibet,” he said.