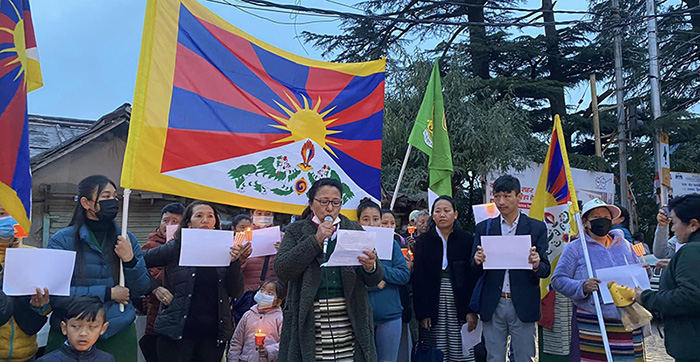 Tibetans held candlelight vigil to show their solidarity with the dire situation in Tibet and China on December 2, 2022. Photo: TPI

Dharamshala, India— Tibetans in Dharamshala held a candlelight vigil to express their solidarity with the current critical situation in Tibet and China, and they said, “current Covid restriction policy is a hidden policy to eradicate Tibetan people and Tibetan culture from this earth. We strongly condemn the misuse of such policy by Chinese officials.”

The Central and Regional Tibetan Women's Association (TWA) organised a candlelight vigil in the main square of McLeod Ganj, Dharamshala, HP, India, on December 2, 2022, to show their solidarity with the current critical situation in Tibet and China. Around 50 people attended the candlelight vigil in solidarity.

At this event, the President of TWA told the gathering of attendees, “Tibetan Woman Association strongly condemned inhuman attitude of Communist China during the spread of Covid-19 in Tibet. The Chinese Government official misuses the Covid restriction to crush Tibetan cultural identity, which is commonly practice in every home. We witness large number of suicide and worst conditions of Tibetans in Tibet during the so called Covid-19 restriction.”

“We request all peace loving people to condemn inhuman actions taken by Chinese which are available on Social Medias. We also protest WHO for showing indifferent to unhygienic food purposely supplied during the Covid restriction. Due to prolong atrocity and undemocratic practice of Communist ideology and poor management of Covid has brought public and student protest in most of Chinese cities an educational institutions,” the President Tenzing Dolma said.

“These protests are the genuine and natural agony of Chinese people and the world should understand the deeper meaning of political instability and suffering of people in main land China. We appeal world leaders to stop not to repeat Tiananmen Square massacre,” she added.

TWA mentioned that they stand in solidarity with those oppressed by CCP and said “We sincerely appeal UN, Human Right Commission, WHO and other organizations to establish genuine democratic functioning by respecting the article 33 of CCP.”

“ Current Covid restriction policy is a hidden policy to eradicate Tibetan people and Tibetan culture from this earth. We strongly condemn the misuse of such policy by Chinese officials,” the President of TWA said.

Tibetan Youth Congress also organised a demonstration at Jantar Mantar in New Delhi, on December 2, 2022, to show support and solidarity with the peaceful protests in China against the Covid restrictions imposed by the government and called for freedom, freedom of expression, freedom of the press, an end to the lockdown and the resignation of Chinese President Xi Jinping and the CCP.

The Central Tibetan Administration, the Tibetan government in exile, also expressed solidarity with peaceful protesters in China against the restrictions of the "zero-covid policy" and called for an end to the lockdown, as well as freedom of movement and expression.

“Since the end of August this year, over 300 million people in China have been placed under severe lockdown over several months, including in Lhasa and Urumqi, where the lockdown exceeded continuously for over 100 days. This has caused immeasurable hardship as people faced extreme restrictions on movement, inadequate access to food and medicine, loss of livelihood and mental anguish. These have resulted in widespread protests in various cities and universities in China against the zero-Covid policy and the protestors also called for freedom and democracy. The Central Tibetan Administration expresses its deep concern and stands in Solidarity,” the Kashag (Cabinet) stated on December 2, 2022.

“Being part of the global community, China cannot sever its ties with the rest of the humanity. The pandemic must be faced as a collective challenge and the spread of pandemic does not discriminate between different forms of governance. The Beijing leadership must enforce humane approach in dealing with these public outbursts. Immediate course correction should be initiated by modelling on measures undertaken by international communities and governments,” the CTA said.

“We strongly urge that no one should be subjected to any reprisal for taking part in any form of protests against the zero-Covid policy and those who have called for Freedom and Democracy,” the Kashag wrote.

“We hope that China will soon transcend to normalcy from the pandemic,” the statement of Kashag concluded.