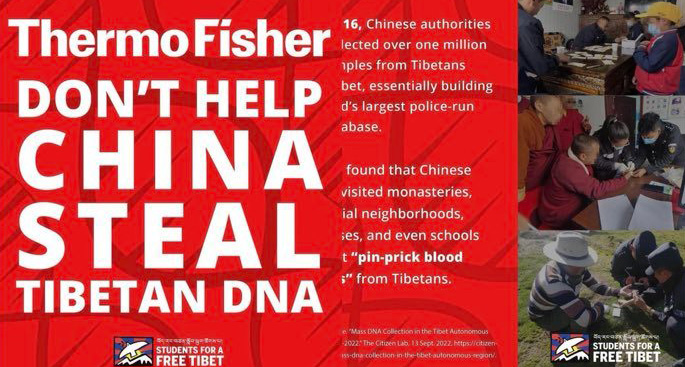 Dharamshala, India — Students for a Free Tibet organised a signature campaign to call on Thermo Fisher to stop selling Chinese DNA kits that are used to steal the DNA of innocent Tibetans, even as young as five years old. They said, "Thermofisherscientific has a responsibility to its shareholders and the wider international community to do their due diligence and ensure that the company's products are not used for repression."

Students for a Free Tibet (SFT) organised an online signature campaign entitled "Thermo Fisher: Don't Help China Steal Tibetan DNA" and urged Tibet supporters around the world and Tibetans to sign the petition to hold Thermo Fisher Scientific accountable for its actions in partnering with China and assisting China to steal Tibetan DNA.

“Recently, Human Rights Watch and Citizens Lab have reported that the Chinese government has launched a full scale campaign of biometric repression against Tibetans. The Chinese government has collected DNA samples from up to one third of the population of Tibetans living under Chinese occupation in the so-called Tibetan Autonomous Region. This includes monks, nuns, nomads, families, and children as young as five years old. Thermo Fisher Scientific, an American manufacturing company, has been supplying the Chinese police with the technology and even DNA kits used to steal DNA from innocent Tibetans,” SFT said.

“Thermofisherscientific has a responsibility to its shareholders and the wider international community to conduct proper due diligence and ensure that the company’s products are not used for repression. In the case of Tibet, Thermo Fisher has completely failed its responsibilities. It is our job to hold the company accountable!,” they added.

“Unlike other biometric markers (fingerprints, facial recognition), DNA with its genome has the power to not only identify an individual but also their genetic relatives. Not only does this state-run DNA collection drive violate individual’s privacy rights and the right to bodily integrity, it will also undoubtedly heighten China’s repression in Tibet. Tibetans, who are subjected to cultural, religious and language repression in Tibet under Chinese occupation, are facing a new high tech form of surveillance which will increase the magnitude of China’s human rights violations,” SFT stated.

“The Chinese authorities have sought to justify the DNA collection drive as a means of solving crimes (such as bank robbery or kidnapping) but in reality this is a textbook case of an authoritarian, colonizing regime finding new ways of repressing people in the name of “stability maintenance and social control.” It is imperative that we stand against the Chinese government’s aggressive DNA collection drive and Thermo Fisher’s involvement in the program,” they concluded.