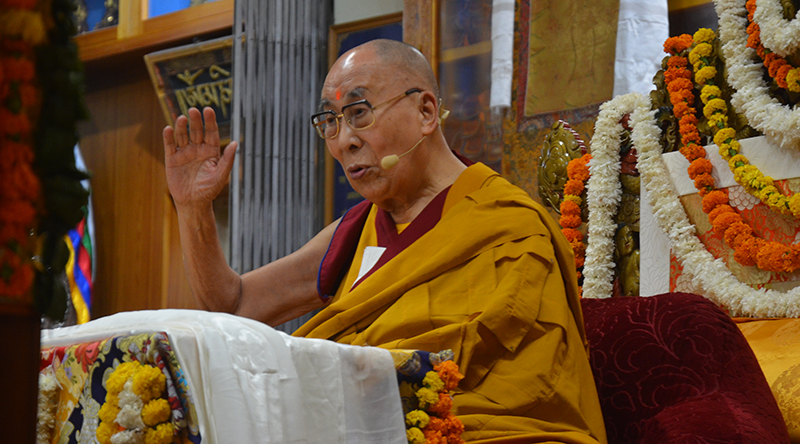 His Holiness the Dalai Lama addressing the Tibetans in the Tibetan temple in Dharamshala, October 26, 2022. Photo: TPI/ Yangchen Dolma

Dharamshala — TCV Global Family and North American Tibetan Association Offer Long life Prayers to His Holiness the Dalai Lama on October 26, and His Holiness said, “I meditate on bodhichitta and emptiness every day, as a result of which I feel at ease in my mind and I am physically fit. So, I urge all of you too to work hard to develop bodhichitta, which will bring you peace of mind.”

Representatives of the TCV Global Family and the North American Tibetan Association (NATA), the two groups offered a long life prayers for His Holiness the Dalai Lama,on October 26, 2022 at Tsuglagkhang, the Main Tibetan Temple, Dharamshala, H.P, India. Approximately 5,000 people from around the world gathered to participate in the event, including 700 current and former TCV Global Family staff and students and 150 Tibetans from NATA

The long life prayer ceremony, led by Ling Rinpoche, joined by Samdhong Rinpoche and Kirti Rinpoche, Ringu Tulku, the abbot of Namgyal Monastery, Thomtog Rinpoche and the Dorje Löbpön of the monastery.

The ceremony began with the recitation of a prayer invoking the previous incarnations of Avalokiteshvara in India and Tibet composed by Trulshik Rinpoché. The subsequent long-life prayer was based on the Fifth Dalai Lama’s ‘Amitayus Extracting the Pure Ambrosia’.

His Holiness the Dalai Lama said after the ceremony, “Today, Tibetans in exile, young and old, have offered this prayer for my long life. And although they are not physically here with us, they are joined by several million Tibetans in Tibet who show whole-hearted faith and regard for me. There may even have been people elsewhere around the world who have heard that this ceremony was taking place.”

“Tibet is known as the land with a special connection to Avalokiteshvara. I am someone who has been blessed by Avalokiteshvara and have links to him through karma and prayers. I have tried to work for the flourishing of the Dharma and Tibetan culture and I offer any contribution I have made by way of practice to Avalokiteshvara. I will live for another two decades for the sake of Tibetans and the cause of Tibet,” he continued.

“I meditate on bodhichitta and emptiness every day as a result of which I feel at ease in my mind and I am physically fit. Bodhichitta is my principal practice. It brings me inner strength, free from anxiety and fear. I urge all of you too to work hard to develop bodhichitta, confident that you have been blessed by Avalokiteshvara,” the spiritual leader of Tibet said.

“I am getting older, but I can still talk. Those who have a connection with me in this life will be cared for by Avalokiteshvara in life after life until enlightenment,” His Holiness concluded.

The ceremony was concluded with recitations of the Prayer for the Flourishing of the Teaching of the Buddha and the Prayer of the Words of Truth.