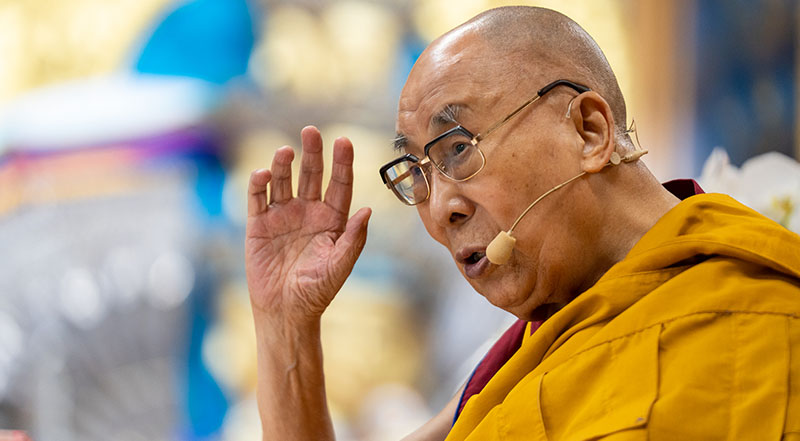 His Holiness the Dalai Lama of Tibet on October 4,2022. Photo: OHHD

Dharamshala – His Holiness the Dalai Lama, the spiritual leader of Tibet, said in a message to Tibetans in Tibet on Tuesday: "China is changing and the day will come when we, Tibetans in exile and Tibetans in Tibet will be reunited and will be able to meditate together on bodhicitta and the view of emptiness."

His Holiness the Dalai Lama gives three-day teaching on Dharmakirti's "Commentary on Valid Cognition" at the request of Taiwanese devotees at the main Tibetan temple in Dharamshala, HP, India, from October 3 to 5, 2022.

On the second day of teaching, His Holiness the Dalai Lama said, "In this world, things appear to be independently existent, but when we try to pinpoint their identity, we are unable to do so. Understanding that things lack any essential nature will free us from cyclic existence. Our misconception that things are inherently existent can be eliminated. We can observe that in day-to-day life, when we are angry or attached to something or someone, the object of our anger or attachment appears to be inherently existent."

“Attachment, anger and hatred are rooted in ignorance. They disturb our peace of mind. But when we are able to do away with clinging to the notion of inherent existence, we can make progress on the path," His Holiness added.

"For hundreds of years, human beings have fought and killed each other. They have developed ever more lethal weapons to do so, and yet if we ask what actually disturbs our peace of mind, it is mental afflictions, or disturbing emotions. The nature of the mind is clear and empty," he said.

“All religions teach us to be kind to each other, but it’s a special feature of the Indian traditions to examine the nature of self. Some of them describe a self known as ‘atman’. Buddhism doesn’t recognize this. What Buddhism asserts in that a person only appears to exist inherently. If we look at it from the point of view of cause or effect, nothing can be found that is inherently existent. The way we misconceive the existence of self is the cause of all our problems. It contributes to our self-cherishing attitude and that means we have little concern for others,” His Holiness mentioned.

His Holiness the Dalai Lama spoke about the covid-19 crisis and the overall situation in Tibet, he said, “Currently, it is reported that Tibetans inside Tibet are facing severe restrictions as a result of the coronavirus pandemic’s spreading in Tibet. The public is facing great difficulties.”

“To some extent, the Tibet-China struggle is linked to the Buddha’s teaching. The Chinese can never change the mindset and behaviour of the Tibetan people, which are rooted in their religion and culture. Rather, the Tibetan Buddhist tradition and its associated culture will gradually spread further and further into China itself,” the spiritual leader of Tibet said.

“You do not need to feel disheartened when faced with temporary difficulties. We Tibetans have a unique karmic connection with Avalokiteshvara, who is our guardian deity. Therefore, you should pray to the three enlightened deities in Lhasa: Jowo Lokeshvara, Jowo Shakyamuni, and Jowo Akshobyavajra,” His Holiness 14th Dalai Lama said.

“Although you are physically distant from me, since we have an uncommon connection based on our karma and prayers, you can think of me, Gyalwa Rinpoche, the Dalai Lama,” he said.

“What is most important is that you should feel at ease and trust that the truth will eventually prevail,” His Holiness added.

“As for myself, I am now 87 years old and in good health. My doctors have assured me after examining me that I will live for another 15 to 20 years. So, you Tibetans in Tibet, please feel at ease and be happy,” the Tibetan Spiritual leader said.

“China is changing. The day will come when we, Tibetans in exile and Tibetans in Tibet, will be reunited and can meditate together on bodhichitta and the view of emptiness. I send you my greetings— Tashi Delek,” His Holiness the Dalai Lama concluded.