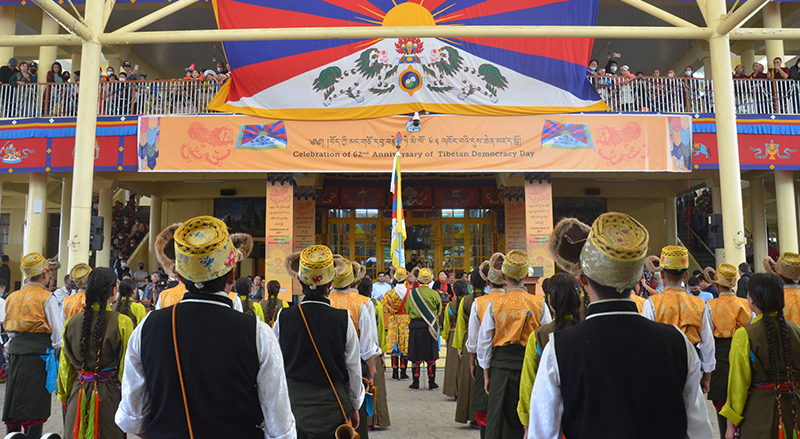 Celebration of the 62nd Tibetan Democracy Day in Dharamshala on September 2, 2022. Photo: TPI

Dharamshala — “It does not bear mentioning that we the Tibetan people living in exile have been fortunate to be enjoying freedom and democracy under the leadership and guidance of His Holiness the Dalai Lama. Nevertheless, we remain intensely mindful of the fact that to our fellow Tibetans living in Tibet, life under the rule of the Communist Party of China is still defined by continuous deprivation of basic human rights and freedoms, and total absence of democracy and so forth,” said Speaker of Tibetan Parliament-in-Exile on the 62nd Tibetan Democracy Day.

Central Tibetan Administration (CTA) and Tibetans celebrated the 62nd Tibetan Democracy Day in Dharamshala, H.P., India on September 2, 2022. The chief guest of the celebration was Shri Vishal Nehria MP, and it was attended by top officials of the CTA and Tibetans of Dharamshala, as well as Indians and Tibetan supporters. Students from Tibetan schools and TIPA dancers performed several beautiful dances on the occasion.

“Among all the communities of people living as refugees in exile, the Tibetan community stands out as one that is run under a democratic system. This is the basis on which the Tibetan people are able to carry out the struggle for our just cause and to preserve our traditional religious, cultural and linguistic heritage, with the ultimate aim being to achieve our national aspiration,” said TPiE Speaker.

“It does not bear mentioning that we the Tibetan people living in exile have been fortunate to be enjoying freedom and democracy under the leadership and guidance of His Holiness the Dalai Lama. Nevertheless, we remain intensely mindful of the fact that to our fellow Tibetans living in Tibet, life under the rule of the Communist Party of China is still defined by continuous deprivation of basic human rights and freedoms, and total absence of democracy and so forth,” said TPiE.

“As a result, they continue to remain subject to arbitrary arrest, detention, persecution and imprisonment, violent repression and torture, and so forth. And this is compounded today by new clampdowns being carried out by the government of China in the name of implementing a “zero Covid” policy for eliminating the Covid-19 pandemic, which first broke out in late 2019 in the central Chinese city of Wuhan,” the statement of TPiE reads.

“A new policy is especially being implemented for ethnic minorities in an attempted move to create the impression that China is now an ethnically homogenous country. With moves such as these, the government of China has, to put it in a nutshell, embarked on implementing a diabolical policy to obliterate the very ethnic and cultural identity of the Tibetan people. Fraternal Tibetans who have been enduring the Chinese occupation rule in Tibet have made clear their total rejection of these policies by carrying out endless series of peaceful protests, which continues to this day. And we the Tibetan people living in exile should never forget that it is our primary duty to publicize the issue of Tibet and to strive to win support for it from the international community,” the Speaker said.

“The Tibetan Parliament in Exile has been continuous in establishing rapports with members of parliaments in countries across the world from time to time and as and when opportunities arose and this remains an ongoing programme,” TPiE stated.

“Over the last more than six decades, governments and people across the world, including especially of India, have routinely provided support, guidance and facilities, and extended the hand of friendship to the Tibetan people with regard to our exile situation, our political cause, for the preservation of our religious and cultural heritage, and for our just cause. To all of them, we take the opportunity provided by this occasion to express our heartfelt gratitude,” the Speaker of TPiE expressed.

“On this momentous occasion of the sixty-second anniversary of the Tibetan democracy day, the Kashag extends its greetings to Tibetan brethren in and outside Tibet and friends who support the just cause of Tibet,” statement of Kashag reads.

“Over the past sixty years, our commitment and ability to follow and make sound development of the democratic system has been the cornerstone of our remarkable achievement in furthering the cause of Tibet and developing a successful Tibetan community in exile. The democratic system, while in exile, is the strength and the driving force of our movement. It will also be the most precious gift to our Tibetan brethren when we are reunited,” Officiating Sikyong said.

“On 2 September 1960, the system of appointing Kalons and secretaries by His Holiness the Dalai Lama from the nominations presented by the Assembly of Tibetan People’s Deputies was established. Further, the existing system whereby Kalons deliberate and decide on all matters, was reformed. The Cabinet Council was constituted to decide important matters and Kalons were assigned responsibility to administer Religion, Home, Foreign Relations, Finance and Education through their respective offices,” the statemen Kashag explained.

“Although today is a moment for us to celebrate, some areas of Tibet have been facing problems of COVID-19 outbreak and natural calamities. The Chinese government’s extreme disease preventive measures have affected the normal life and livelihood of Tibetans. We appeal to our Tibetan brothers and sisters in Tibet to exercise social distancing and preventive measures, and also recite mantra of Tara as per divination. As announced earlier, the Kashag re-appeals to Tibetans in exile to recite mantra of Tara,” Kashag said.

“On 23 June 2022, the U.S. Congress organized for the first time a hearing of experts on the historical status of Tibet. The experts – based on Chinese documents and international law – pointed out that the Chinese government’s claim that “Tibet has been part of China since antiquity” is not true,” it stated.

“We would like to thank Representative Jim McGovern and Representative Michael McCaul of the U.S. Congress for introducing “the Promoting a Resolution to the Tibet-China Conflict Act on 13 July 2022”. It not only conforms to the Central Tibetan Administration’s Middle-Way policy, but also helps to give leverage to our efforts to resolve the Sino-Tibet conflict through dialogue. We will continue to make efforts to encourage like-minded countries in Europe to do the same,” Kashag said.

“Since the last more than one year, the Sikyong, Kalons and concerned officials of the departments visited Tibetan settlements to assess the needs of the general public. It has enabled the Kashag to formulate projects for the next four years such as rehabilitation of those who don’t have home, needy ones in the settlements and plantation of medicinal plants in the agricultural settlements. It helps to form a clear objective, structure and implementation of projects as per the needs of the people,” the statement of Kashag said.