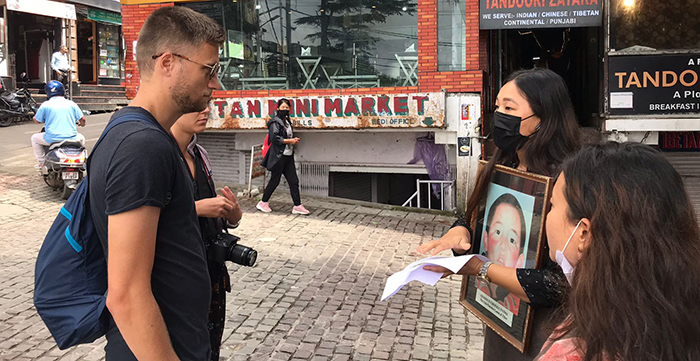 Dharamshala, India — On the occasion of the International Day of the Disappeared, the Tibetan Women's Association raised awareness about the 11th Panchen Lama of Tibet at McLeod Square in Dharamshala and called on China to release the Panchen Lama and his family members.

Today, on the International Day of the Victims of Enforced Disappearances, the Central Tibetan Women's Association (TWA) raised awareness in McLeod Square by communicating and informing about the 27-year disappearance of His Holiness the 11th Panchen Lama and his family, who were abducted by the Chinese authorities in 1995.

“The 11th Panchen Lama, his teacher and his family were abducted by the Chinese government in 1995 and have been missing ever since, and also many of our brothers and sisters in Tibet, who continue to disappear. Therefore, we urge the UN Committee on Enforced Disappearances (CED) to thoroughly investigate the fate of those who have been missing for years,” said Tsering Dolma, Vice President of TWA.

“The 11th Panchen Lama disappeared for 27 years without his whereabouts being known. Since his arrest in 1995, Tibetans and their supporters, various non-governmental organisations, the international community and governments have called on China to shed light on the Panchen Lama, but these calls have gone unheeded,” another member of TWA said.

“We request the world leaders and the public to support us in the search for truth and justice for our stolen son, the Panchen Lama. We also want to send a strong message to Beijing that the world has not forgotten Dedhun Choekyi Nyima, despite China's efforts to erase him from our history. We call on the Chinese government to legitimately allow the Panchen Lama and his family to live a free life, in accordance with international law and the treaties to which China is bound,” a member of TWA said.

"Enforced disappearance has become a global problem and is not restricted to a specific region of the world. Once largely the product of military dictatorships, enforced disappearances can nowadays be perpetrated in complex situations of internal conflict, especially as a means of political repression of opponents. Hundreds of thousands of people have vanished during conflicts or periods of repression in at least 85 countries around the world," UN stated while observing the day.

"On the International Day of the Victims of Enforced Disappearances, the United States stands united with all those affected by the crime of enforced disappearance. This practice is an egregious violation of human rights prohibited under international law, yet continues to be used to silence dissent and attack civil society," said United States Department of State.

"Every year, ordinary people fall victim to enforced disappearance and vanish without a trace after being arrested, detained, or abducted by government officials or those acting with their tacit assent. Those responsible often refuse to acknowledge the occurrence of disappearances or may even excuse them as part of counter-terrorism activities. Authoritarian regimes and their proxies try to instill fear and maintain control by disappearing human rights advocates, political activists, environmental defenders, journalists, and other vulnerable groups such as children and persons with disabilities," secretary Blinken said.

"The United States renews its commitment to addressing enforced disappearance and calls on governments around the world to put an end to this practice, hold those responsible to account, reveal the whereabouts or fate of loved ones who have been disappeared, and respect the human rights and fundamental freedoms of all persons," it said.