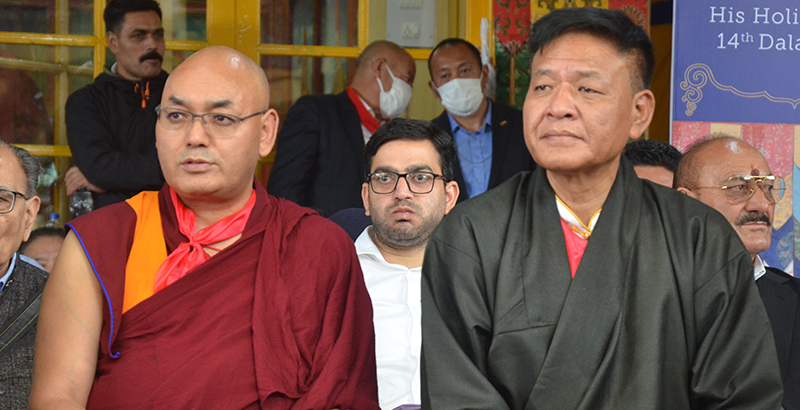 Dharamshala, India — Sikyong of Central Tibetan Administration and Speaker of Tibetan Parliament-in-Exile offered their deepest condolences to the family members of former Prime Minister Shinzo Abe, a close friend of His Holiness the 14th Dalai Lama and the Tibetan people, who passed away on July 6, 2022.

Speaker of the Tibetan Parliament-in-Exile, Khenpo Sonam Tenphel, offered his heartfelt condolences on the deeply saddening demise of former Japanese Prime Minister Shinzo Abe, who was shot at a campaign event earlier today.

In a condolence letter written to the late PM’s wife, the Speaker wrote, “It is with great distress that we learned the unpleasant news of the heinous attack on your beloved husband’s life and subsequently the news of his passing away in the hospital. We are shocked beyond words."

"Former Prime Minister Shinzo Abe, the longest-serving prime minister of Japan was not only a towering leader of Japan, he was a man with great values and wisdom and a close friend of His Holiness the 14th Dalai Lama and the Tibetan people. Mr. Shinzo Abe, as the leader of the Liberal Democratic Party, was instrumental in establishing the All Party Japanese Parliamentary Support Group of Tibet, which is the world’s largest Parliamentary Support Group with parliamentarians from different political parties," he said.

"With his sad demise, we have lost a great friend of Tibet and one of the towering leaders of the world. In this hour of grief, the Tibetan Parliament and the Tibetans are with you. We send our prayers during this difficult time,” the Speaker concluded.

“On behalf of the Central Tibetan Administration and the Tibetan people across the globe, I express our deepest condolences on the untimely passing of His Eminence Shinzo Abe, the former Prime Minister of Japan and your beloved husband,” Sikyong of CTA wrote in the condolence letter.

“We are lost for words at the senseless act of violence that has taken away from this world a visionary and a stalwart leader. This colossal loss is felt strongly by the Tibetan people around the globe. He was a long-standing friend of the Tibetan people, and his support for the Tibetan people’s struggle for freedom, including his prominent contribution to the setting up of the All Party Japanese Parliamentary Support Group of Tibet, will always be remembered with profound gratitude,” Sikyong said.

“As we mourn his untimely and tragic passing, his towering legacy will live on for generations. We stand alongside your family and the people of Japan through this difficult time. Once again, please accept our deepest condolences,” he concluded.