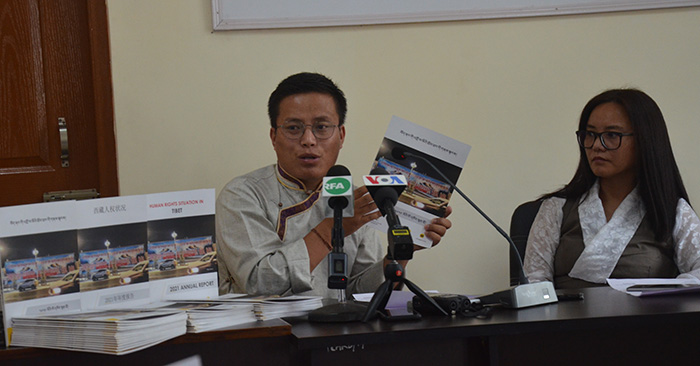 Dharamshala — “In 2021, the government of the People's Republic of China (PRC) continued to perpetrate gross human rights violations involving arbitrary detention and torture, religious repression, and a widespread crackdown on the right to freedom of expression and information. In particular, the Chinese party-state made no pretence that forced cultural assimilation has now become an entrenched part of Chinese policy in Tibet,” said TCHRD’s annual human rights report.

Tsering Tsomo, director, Nyiwoe, researcher, and Tenzin Sangmo, media and research officer of Tibetan Centre for Human Rights and Democracy (TCHRD), released its 2021 annual report on human rights situation in Tibet at its office in Dharamshala on April 26, 2022.

“In 2021, the government of the People's Republic of China (PRC) continued to perpetrate gross human rights violations involving arbitrary detention and torture, religious repression, and a widespread crackdown on the right to freedom of expression and information. In particular, the Chinese party-state made no pretence that forced cultural assimilation has now become an entrenched part of Chinese policy in Tibet. Party officials and cadres must implement what the party refers to as the 'sinicization' process when managing all aspects of Tibetan lives,” the human rights report stated.

“The party-state justifies its harsh implementation of the sinicization policy with the rhetoric of "ethnic unity" and "building a modern socialist state". To enable the goal of creating a common Chinese national identity that is monolingual and loyal to the party-state, Tibetans who openly resist are detained and tortured in undisclosed locations for prolonged periods without access to legal representation. Tibetans are also disproportionately targeted for sharing information and communicating online; many are detained for merely keeping photos of their spiritual leader, His Holiness the Dalai Lama, on their phones. The party-state imprisoned Tibetans for criticising the imposition of Chinese medium education or holding prayers for the wellbeing of His Holiness the Dali Lama on the spiritual leader's birthday,” the report said.

“Chinese authorities doubled down on their efforts to sinicize Tibetan Buddhism by banning any display of religious articles or practices not just among party members but also among school children. They enforced new regulations to tighten control over religious personnel and religious information shared on online platforms,” said Tsering Tsomo.

“Accounts from the ground in eastern Tibet revealed the mass raids conducted at Tibetan homes as authorities seized mobile phones and scoured them for 'illegal' contents such as photos of His Holiness the Dalai Lama. The raids covered entire villages in Wonpo and Denma Townships in Sershul County, Kardze Tibetan Autonomous Prefecture. Many Tibetans were either detained incommunicado or held in extrajudicial detention facilities in the name of political education,” said Nyiwoe.

“The sinicization policy has also resulted in the systematic persecution of Tibetan educators, intellectuals, and cultural leaders, many of whom had been detained incommunicado and sentenced in secret. The silencing of educated Tibetans who exercise considerable influence on Tibetan society assumes increased urgency due to the continued violation of education and language rights,” the report stated.

“Vaguely written laws and regulations were implemented to impose Chinese medium education, shutter alternative avenues for Tibetan medium education, and institutionalise party ideology and propaganda in the state education system in the name of 'compulsory education',” the report added.

“Tibetans inside Tibet sacrificed and persevered in making their voices heard and aspirations known. They demonstrated that human rights abuses and political repression will not go unchallenged. Tibetans will continue to call out the unjust and inhumane policies of the Chinese party-state and demand accountability for human rights violations, political repression, and crimes against humanity,” they concluded.

TCHRD to the Chinese government:
1. Allow the Tibetans to determine their own educational and cultural affairs as provided in the PRC's Constitution and Regional National Autonomy Law.
2. Release all Tibetan political prisoners, including the 11th Panchen Lama Gedhun Choekyi Nyima, who disappeared at the age of six in 1995.
3. Guarantee fair trial rights to Tibetan detainees and provide them with immediate legal representation of their choice, including informing their family members about the reason and legality for detention.