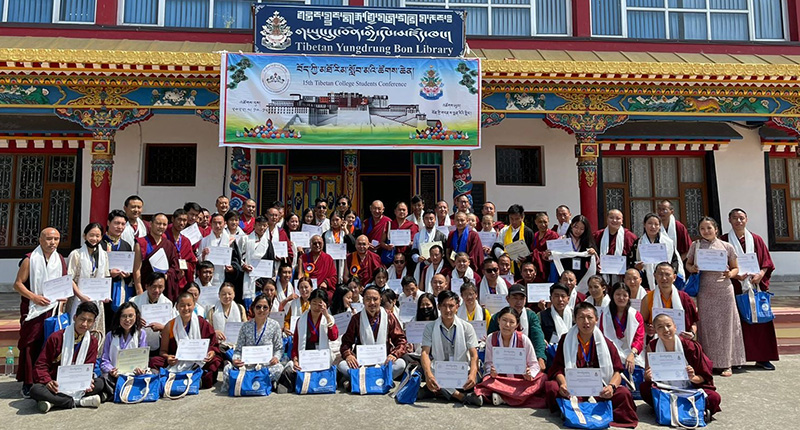 Speakers, guests and participants of the 15th Tibetan Student Conference posing for photographs during the conclusion of the conference in India on 15 April 2022. Photo: TPI

Dolanji, India – The 15th Tibetan College Students' Conference was concluded in India on Friday, in the presence of the Speaker Khenpo Sonam Tenphel, who called for greater political attention and responsibility from students inside and outside Tibet.

The five-day of the "15th Tibetan College Students' Conference" was held from 10 to 15 April at Menri Ling Monastery, near Solan town in the state of Himachal Pradesh, India, with over 80 students from 24 colleges, including Dalai Lama Institute for Higher Education in Bengaluru, the College for Higher Tibetan Studies in Sarah, and the Central Institute of Higher Tibetan Studies in Varanasi.

The conference reaffirmed Tibet's history as an independent nation, highlighted the importance of conserving and promoting the Tibetan language at home to help preserve and perpetuate Tibetan religion and culture.

The conference also featured presentations and discussions on a total of 13 topics, citing the example of the great and talented women of the Tibetan Empire period, on the special responsibilities of women, and other topics, including:

On 15 April, at the closing ceremony of the conference, the Chief Guest Speaker Khenpo Sonam Tenphel of the 17th Tibetan Parliament-in-Exile spoke on the protection of the religious and cultural aspects of Tibet. He expressed the importance of considering the religion and culture of Tibet in a manner consistent with the science of altruism, as well as considering new actions that are beneficial to society, and working to make Tibetan students into professionals of both virtue and talent.

Speaker Khenpo Sonam Tenphel suggested that the resolution adopted at the conference on 13 topics should be implemented and Tibetan students should be encouraged to pursue a modern education along with the five major sciences of studies of Tibetan Buddhism.

"Tibetan students studying at colleges in India will benefit themselves and society if they focus on studying Buddhism. Especially during their studies, Tibetan students should be characterised as different from students in other countries and work extra hard", said Speaker Tenphel.

In response to the Chinese government's policy of cultural genocide in Tibet, the Speaker expressed concern and stated, "we have lost our country and become political refugees and therefore have an additional responsibility, especially the younger generation who need to pay attention to politics and take on greater responsibility."

"I believe it would also be beneficial for Tibetan students studying in universities around the world to be able to attend Tibetan college students' conferences in the future to boost their confidence and awareness," he further added.