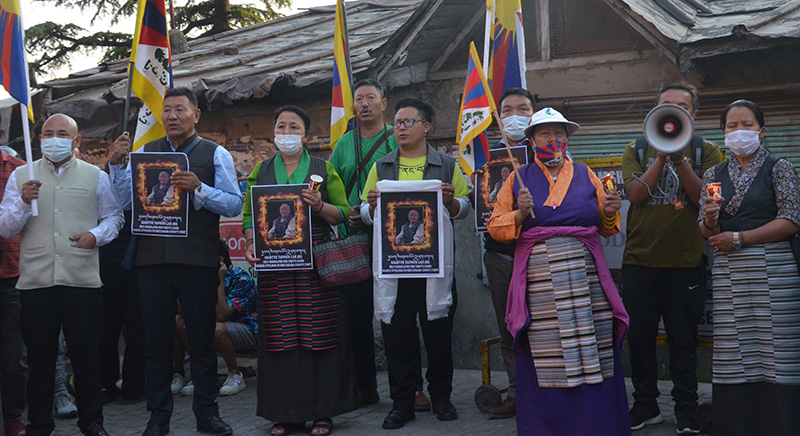 Tibetans and supporters of Tibet in Dharamshala, India, on Monday, April 4, held a candlelight vigil in memory of those who self-immolated in Tibet, particularly Taphun, who lost his life by setting himself on fire in protest against the Chinese government's atrocities and repressive policies in Tibet.

Tibetans expressed deep devotion to his sacrifice and showed solidarity with his family and relatives in Tibet. On the same day, the Central Tibetan Administration held a prayer service to mourn the death of Taphun and all other self-immolators, seeking the freedom and return of His Holiness the Dalai Lama to Tibet.

Tibetans and supporters, joined by members of the Tibetan Parliament in-Exile, representatives of Tibetan NGOs, took part in a candlelight vigil for Taphun organised by the five major Tibetan non-governmental organisations (NGOs) based in Dharamshala. With prayers chanted and holding photographs of the late Taphun and the national flag of Tibet on April 4, 2022, they marched through the streets of McLeod Ganj.

The NGOs comprised the Tibetan Youth Congress, Students for a Free Tibet, the Tibetan Women's Association, the Gu Chu Sum Tibetan Movement and the National Democratic Party of Tibet. The Central Tibetan Administration (CTA) also conducted a prayer service at Gangchen Kyishong in Dharamshala on 4 April 2022 to mark the deaths of two self-immolators in the end of March 2022.

Addressing the gathering for prayers, Sikyong Penpa Tsering said: "We are deeply saddened by the news of yet another self-immolation. However, we stand in solidarity in honouring their sacrifices for the great cause of Tibet."

Taphun carried out a self-immolation in front of a Chinese police station near Kirti Monastery on 27 March 2022 to protest against the Chinese government's repressive policies and inhumane treatment of Tibetans in Tibet. Last year, on his 80th birthday, Taphun said: "I am confident that the sun of happiness will shine over Tibet through the blessings of His Holiness the Dalai Lama. Young Tibetans should not lose heart!"

Taphun belonged to the nomadic village of Merum, Ngaba County (Aba Prefecture, Sichuan Province) in eastern Tibet. All along he had condemned the Chinese government's repressive policies and the mistreatment of Tibetans inside Tibet.

Economic marginalisation, environmental destruction and political repression, social discrimination, cultural and linguistic assimilation and ideological re-education constantly continued in a forceful, repressive, atrocious, frightful, evil, cruel, monstrous and dictatorial policies over the last 70 decades, particularly with the migration of the Chinese to Tibet with a colonial mindset, have caused great resentment among the inhabitants of occupied Tibet.

Tibet was invaded by the communist totalitarian state of China in 1949, reaching full occupation in 1959. Over 1.2 million people, 20% of the country's population of six million, have since died as a direct result of China's invasion and occupation. Additionally, over 99% of Tibet's approximately 6000 cultural and religious monasteries, temples and shrines have either been looted or destroyed, leading to the destruction of several hundred thousand sacred Buddhist scriptures, statues, books, manuals, paintings, and other cultural works.

Up until 1949, Tibet was an independent state in the Himalayas in vast Asia, with practically limited contact with the rest of the world. Tibet was a rich cultural treasure - a unifying theme among Tibetans - as was their own language, literature, art and worldview, shaped by life at high altitude, in a harsh environment, in balance with their surroundings. Adopting a complete external and internal political system as a nation, Tibet maintained its own national language, religions, flag, currency, coins, army and passport until China replaced all this with the Chinese colonial system.