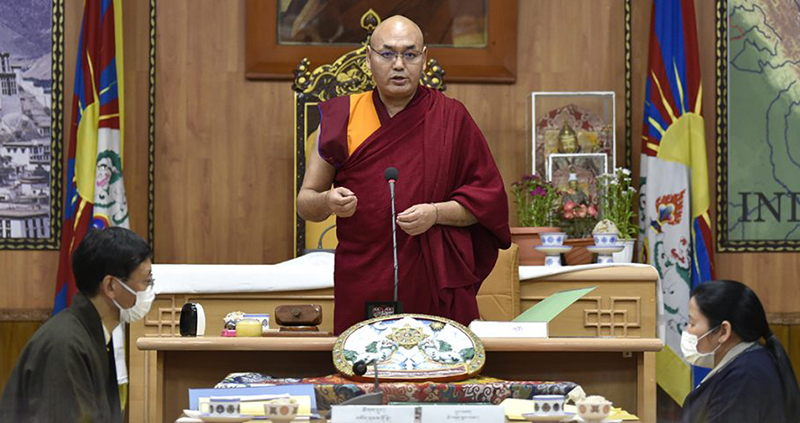 Dharamshala — The Tibetan Parliament-in-Exile (TPiE) commences its third session and highlights the critical environmental situations in Tibet, by presenting a five-point official motion on the critical environmental situation inside Tibet and calling on the Chinese government to check on mass mining operations and deforestation happening in Tibet.

In his opening speech, Khenpo Sonam Tenphel, the Speaker of the TPiE, introduced the brief agenda of the session which includes an official motion on the critical environmental situation in Tibet, a budget presentation by Finance Kalon, the precis budget report presentation by the Chairman of the budget estimate committee, legislative amendment, the financial status of CTA, and others.

"The tension in Tibet continues and, in particular, the Sinicization of the Tibetan language and Tibetan Buddhism poses a dangerous and serious situation for the survival of Tibetan identity," the Speaker said.

"Although we are one of the smallest refugee communities in the world, our system of democracy and governance is widely appreciated by the international community. Despite all the challenges and uncertainties that are often associated with refugee status, we have thrived and succeeded entirely due to the visionary leadership and guidance of His Holiness the Dalai Lama. We owe our deep gratitude to His Holiness for giving us the gift of democracy to strengthen our political struggle," he added.

"Our democracy has been established for more than 60 years. Therefore, the Tibetan people should be sure not to neglect the precious democratic system gifted to us by His Holiness the Dalai Lama. Moreover, the elected parliamentarians have a greater responsibility to maintain the trust of the masses and exercise their participation in the proceedings with a sense of responsibility and with the interest of six million Tibetans at heart," said the Speaker.

Geshe Lharampa Gowo Lobsang Phende, a member of TPiE, presented a five-point official motion on the critical environmental situations inside Tibet, which was supported by Parliamentarian Geshe Atong Rinchen Gyaltsen. The official motion on the critical environmental situation in Tibet highlights the appalling environmental destruction in Tibet by calling on the Chinese government to control mass mining operations and deforestation in Tibet. It further calls on the Chinese government to conduct an environmental impact assessment (EIA) before any mining operation or infrastructure development project is launched on the Tibetan plateau.

Sikyong Penpa Tsering, the incumbent Finance Kalon of the Central Tibetan Administration (CTA), presented the 2022-23 Budget of Central Tibetan Administration proposing an amount of Rs. 2,535.14 million, followed by Parliamentarian Ngodup Dorjee, the Chairman of the Budget Estimate Committee of the Tibetan Parliament-in-Exile, presenting the Précis report of the Committee.