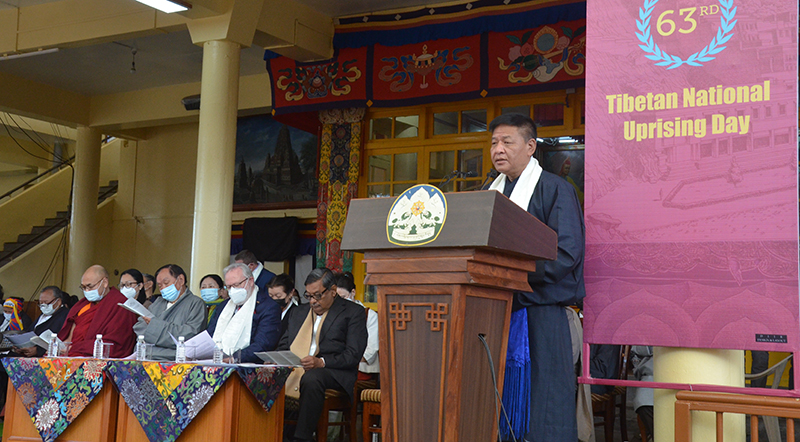 Dharamshala, India — “If the Chinese government wishes to win the Tibetan people’s love and loyalty for the People’s Republic of China, it should end its suppression of Tibetans’ human rights and annihilation of the Tibetan identity by respecting its own constitution,” said Sikyong of Central Tibetan Administration on Tibetan National Uprising Day, March 10, 2022.

On March 10, 2022, the Central Tibetan Administration (CTA) officially observed the 63rd Tibetan National Uprising Day, at Tsulakhang, Mcleod Ganj, Dharamshala, in the presence of Vice President of the Czech Senate, Jiri Oberfalzer, as chief guest and Amarendra Dhari Singh, member of the Rajya Sabha as special guest, CTA Sikyong, ministers, secretaries and the Speaker of the Tibetan Parliament in Exile, parliamentarians, representatives of various non-governmental organisations, and Tibetans and Tibetan supporters.

At the event, Penpa Tsering, Sikyong(President) of CTA delivered the Kashag’s statement on Tibetan national uprising day and said, “sixty-three years ago, on this day in 1959, Tibetans in Lhasa rose in peaceful protest against the Chinese government’s occupation of Tibet. Today also marks the fourteenth anniversary of non-violent protests by Tibetans, which swept across Tibet from March 2008. We pay tribute to the brave men and women of Tibet who have sacrificed their lives for our spiritual and political cause and stand in solidarity with the Tibetans who continue to suffer great oppression in Tibet."

“In Tibet’s long history, it attained supremacy during the reign of the Three Great Religious Kings. Even after its disintegration, Tibet’s Buddhist religion enjoyed equal influence in East Asia on par with Mongolia’s military might and China’s political power. Tibet shared a priest-patron relationship with the empires which occupied Tibet and the successive Chinese empires, enjoying mutual respect and harmony most of the time,” said Sikyong while delivering the Kashag statement on March 10, 2022.

“When the Chinese communist assumed power on 1 October 1949, it announced the so-called “peaceful liberation” of Tibet. Soon after in 1950, the overwhelming Chinese communist forces attacked Chamdo and defeated the Tibetan army. The whole of Tibet was brought for the first time under its occupation after coercing Tibetans to sign the 17-Point Agreement in 1951. Although His Holiness the Dalai Lama and the Tibetan government made every effort to cooperate with the Chinese government based on the agreement, the basis for peaceful co-existence was shattered by the Chinese army’s constant oppression. His Holiness the Dalai Lama, followed by some 80,000 Tibetans, had no choice but to leave for exile,” he added.

“In the next two decades, Tibet experienced the darkest period in its history. The advent of the “democratic reforms” in Tibet’s Kham and Amdo provinces in 1956 led to the destruction of monasteries and arrests of lamas and monks. At that point in time, the Chinese government had no clear policy on ethnic issues. However, that was soon to change when Mao Zedong taking cue from the 1958 revolt by Tibetans and Salars in Yadzi county in Amdo province, pointed out that the nationality issue is essentially a class issue. He unleashed an unending cycle of disastrous campaigns in the name of suppression of the revolt, democratic reforms, and Cultural Revolution. It was the actual beginning of cultural genocide in Tibet, leading to the death of 1.2 million Tibetans and destruction of over 6,000 monasteries,” the statement stated.

“These policies culminated in the unprecedented peaceful protests by Tibetans across Tibet’s three traditional provinces in 2008. The Chinese government brutally suppressed the uprising, leaving hundreds of Tibetans dead and thousands arrested. It resulted in massive deployment of armed forces and restrictions on the movement of Tibetans across Tibet. The policy to make Chinese as the language of instruction in the schools was expedited, and the ‘patriotic education’ campaign in the monasteries strengthened. As a result, since 2009, 156 Tibetans self-immolated in protest across Tibet, calling for the return of His Holiness the Dalai Lama to Tibet and freedom for Tibetans. The Sino-Tibetan dialogue process also ended in stalemate in 2010,” it continues.

“Today, our greatest concern is the ongoing systematic Sinicization of the new generation of Tibetans in Tibet. In 2011, some policy advisors of the Chinese Communist Party called for the abrogation of the national regional autonomy system and adoption of the so-called “Second Generation of Ethnic Policies” to weaken the identities of the 56 nationalities and strengthen a single Chinese national identity. They called for the revocation of the preferential policies for the ethnic minorities, encourage ethnic assimilation, enforce the use of the Chinese language, and closure of schools for nationalities. These measures are now being actually implemented in Tibet,” the Sikyong of CTA said.

“In 2012, the Chinese government had to reverse its policy of merging primary schools in villages into boarding schools after facing strong protest in China. However, China’s State Council issued an order in 2015 making it mandatory for children in ethnic areas to study, live and grow up in the boarding school system. It is estimated that about 78% of the total students in Tibet have been forced to live in the boarding schools by 2019,” he continues.

“Similarly, in August 2021, China’s Ministry of Education issued a decree to implement “Children’s Homophony Plan for Common Language for Preschool Children” across ethnic and rural areas during the 14th five-year plan. It mandates the preschool children to learn Mandarin as the spoken and written language to lay a so-called good foundation for compulsory education. Likewise, the medium of language for the recruitment exam for government jobs in Tibetan areas was changed from Tibetan to Chinese. Such a policy to deprive Tibetan children of their right to learn their language which is at the core of their identity, culture, and religion will have grave repercussions in the next two decades,” Sikyong added.

“The systematic deprivation of the right to learn and use one’s own language is a gross violation of the rights of the minority nationalities enshrined in the Chinese constitution and law on national regional autonomy. It also clearly shows how the Chinese government is violating various national and international declarations on the protection of languages, including the declaration of the World Language Resources Protection Conference held in September 2018 in Changsha in China, the UN Declaration on the Rights of Indigenous Peoples, and the International Covenant on Civil and Political Rights, which it has signed," the statement said.

“We respect the constitution of the People’s Republic of China because it upholds the equality of the nationalities and guarantees the basic rights of the minorities. However, to promote the Chinese language, China’s Standing Committee of the National People’s Congress in December 2021 repealed constitutional provisions relating to the rights of the nationalities to teach their own languages. This is a gross misinterpretation and abuse of the principles of the Chinese constitution,” Sikyong said.

“We respect the Chinese people and their culture. But we cannot accept ourselves as a single Chinese national, because the Tibetan people have a distinct race that descended from their six original ancestral tribes and a culture deeply influenced by Bon tradition and Buddhism,” Sikyong continues.

“If the Chinese government wishes to win the Tibetan people’s love and loyalty for the People’s Republic of China, it should end its suppression of Tibetans’ human rights and annihilation of the Tibetan identity by respecting its own constitution. It should accept the historical fact of Tibetans and Chinese having lived as neighbours with harmony and mutual help. It must cease thoughts and actions which give rise to enmity between Tibetans and Chinese, and instead pay attention to the aspirations of the Tibetans,” he added.

“Despite the Tibetan people having their true aspirations made clear in the last 63 years, the Chinese government continues to pursue policies to the contrary. Today, in the name of building infrastructure and construction of natural reserves, Tibetan nomads and farmers are forced to relocate, thereby, forcibly altering their traditional living environment. The relocation is also pushed under the guise of alleviating poverty, and training and transfer of the ‘rural surplus labourers’. The Tibetan students are sent to work in China as part of its assimilation drive. Likewise, marriages between Tibetans and Chinese are encouraged under the slogan of “role models for ethnic harmony”, the CTA Sikyong explained.

“The atheist Chinese government continues to interfere in Tibetan Buddhist tradition of reincarnation, control of the monasteries, and restrict the academic learning and free movement of monks and nuns. Under the banner of making “Tibetan Buddhism adapt to socialist society and develop in the Chinese context,” the Chinese government has banned dissemination of religious content online and continues to demolish Buddhist statues in Drakgo, and forcibly shut down Kharmar monastery in Kham. Similarly, arbitrary arrests and imprisonment of Tibetan intellectuals, such as Go Sherab Gyatso, writers, teachers, students, human rights and environmental activists continue unabated. There are also reports of destruction of Tibetan Buddhist temples and stupas in China, stripping them of traditional architecture, Tibetan writings, and murals,” it stated.

“The Central Tibetan Administration hopes to find a mutually-agreeable solution to Tibet’s future status through dialogue based on the Middle-Way Approach, and particularly, by urging the Chinese government to correct its wrong policies. We are ready to engage in discussion to seek a lasting solution based on equality, friendship, and mutual benefit,” the Sikyong of CTA said.

“Until the Sino-Tibetan conflict is resolved, as the free spokespersons of our brethren in Tibet, we will make every effort to use result-oriented means to bring the ongoing Chinese government’s repression and extermination of Tibetan identity to the attention of world’s parliaments, governments, think tanks and the media through the voluntary Tibetan advocacy campaign and other means,” he added.

“Despite China’s repression, Tibetans inside Tibet remain unwavering in their determination and courage to preserve their religion, culture, language and protect the natural environment. Their spirit is the backbone of our determination. The responsibility being taken by our compatriots in Tibet is an inherent human right and also in accordance with the Chinese constitution. Therefore, it is of paramount importance to continue the struggle for the right to preserve our identity with unwavering determination. Keeping in mind the Chinese government’s policies in Tibet, the Tibetans in exile must redouble our efforts to preserve our culture and identity,” he said.

“Taking the opportunity, we wish to offer our heartfelt thanks to various nations, above all the Central and State Governments of India, and Tibet Support Groups for supporting the Tibetan cause for the last 60 years. We thank the US government for its recent appointment of the Special Coordinator for Tibetan Issues. We urge the like-minded nations to support the Middle-Way Approach to resolve the issue of Tibet by recognising the true historical status of Tibet,” said Sikyong while thanking all supporters around the world.

“We extend our prayers for Tsewang Norbu, a 26-year-old well-known Tibetan singer, who according to media reports died after self-immolating in Lhasa on 25 February. However, due to heavy restrictions and surveillance imposed by the Chinese government, we could not ascertain information about his condition. In this critical time of our struggle, the loss of life of a single patriotic Tibetan is an irreparable loss for our cause. Since the life of every Tibetan is precious, we must remain alive and contribute to our spiritual and political cause,” Sikyong said.

“We also mark this day under the shadow of war triggered by the invasion of Ukraine. We express our prayers for those who lost their lives and those injured in this conflict, and stand in solidarity with over 2 million Ukrainian refugees. We also pray for the immediate end to the global pandemic and other man-made conflicts, and may humanity live in peace and happiness,’’ he concluded.