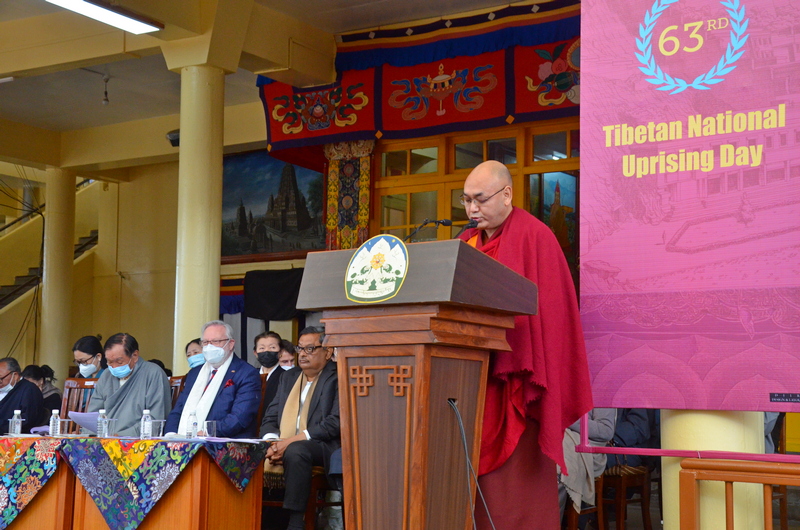 Dharamshala — The 63rd Tibetan Uprising Day, officially commemorated by the Tibetan Exile on Thursday, March 10, 2022, the Tibetan Parliament in-Exile (TPiE) issued a statement condemning the Chinese Communist Party's purposeful and inhumane policy of genocide against Tibet and reiterated its call to the Communist leadership to resolve the Tibetan issue through peace talks.

In its Statement, the Parliament paid tribute to the many martyrs who have given their precious lives for the cause of freedom since 1959, for the cause of Tibetan freedom in Tibet and outside Tibet since 1959, both inside and outside Tibet, while expressing solidarity with the Tibetans who are still being persecuted under the oppressive rule of the Chinese Communist Party (CCP), and praising and supporting the heroic spirit and tireless efforts of all the Ukrainian people who are resisting the Russian invasion.

The statement recalled the history and condemned the CCP's armed invasion of Tibet in the name of "peaceful liberation of Tibet" in the same year of the founding of the People's Republic of China in 1949, forcing Tibet to sign the "17 Agreements on Measures for the Peaceful Liberation of Tibet" in 1951, followed by the CCP's progressive and illegal complete occupation and domination of Tibet in violation of this agreement.  “The underlying agenda of these policy measures included the marginalisation of or otherwise trampling on the religious and cultural heritage of the Tibetan people without showing any sense of regard for them”, the statement said. The statement stressed that under this oppressive rule, the Tibetan people were continuously persecuted and the CCP even hatched a plot to kill His Holiness the Dalai Lama, which led to a bloody crackdown on the protest movement launched by the masses of Tibetans on March 10, 1959. To this day, the Tibetan people commemorate March 10 every year as "Tibetan Uprising Day" and have never stopped protesting against the CCP.

The statement pointed out that for more than six decades, the CCP has implemented brutal repressive policies such as the so-called “quelling the rebellion”, “Democratic Reform”, “Class Struggle”, “People’s Commune” system, “Cultural Revolution” movement, and “Military Control Committee” system, directly causing the tragic death of more than one million Tibetan people, as well as damaging and destroying Tibet's large-scale ecological environment and thousands of religious sites, and deliberately erasing.“There is no mistake about the fact that the ultimate objective of the government of China is to turn Tibet into Chinese both in its outer form and internal substance. Such then is the seriousness of the extremely distressing situation in Tibet today”, the statement reads.

Citing the demonstrations and protests of Tibetans launched throughout Tibet from 2008 to the present, in particular the self-immolations, the statement condemned the shooting and violent repression of unarmed Tibetans by the CCP, naming the well-known singer Tsewang Norbu who set himself on fire in front of the Potala Palace in Lhasa on February 25 this year and stressing that at least 156 Tibetans have set themselves on fire so far. The Chinese regime ignores these demands and instead distorts the facts and deliberately misleads the world in an attempt to hoodwink them, while their common demands are "Let the Dalai Lama return to Tibet" and "Free Tibet”. The statement also severely condemns Xi Jinping, the current leader of the CCP, for using propaganda to promote communist ideology, not only to control people's thinking but also to enhance Internet surveillance and deny their freedom of expression.

In response to the CCP's ideological education, the statement expressed concern for the preservation and perpetuation of the Tibetan language, arguing that the CCP has brought thousands of Tibetan students to China while closing all private Tibetan schools in Tibet itself. This policy of brainwashing and assimilation is aimed at erasing the ethnic identity of the Tibetan people, and the move was severely condemned and strongly protested.

The statement emphasised that the Chinese government's establishment of "Monastery Management Committees" and other bodies in monasteries, interference in the reincarnation system of Tibetan Buddhist leaders, banning Tibetans under the age of 18 from becoming monks and nuns, forcing Tibetans to hang pictures of top Communist Party leaders in monasteries and homes, destroying Buddha statues, and demolishing monasteries are all reckless violations of Tibetans' rights to freedom of religion and belief by the CCP. This is a serious violation of the unique traditions and procedures of Tibetan Buddhism and marks the active implementation of the "Chineseisation of Tibetan Buddhism" campaign, which is equivalent to the revival of the atrocities of the Chinese Cultural Revolution.

The statement also mentioned the 11th Panchen Lama Gedhun Choekyi Nyima Rinpoche who has been abducted by the Chinese government for 25 years and whose whereabouts are still unknown, and the famous Tibetan writer Go Sherab Gyatso, who has been sentenced to 10 years in prison, and expressed concern about their current situation, condemned the Chinese government's arbitrary arrest and sentencing of Tibetans and demanded that the authorities should release all imprisoned Tibetans. The Parliament also called on human rights organisations, including the United Nations, and governmental and non-governmental institutions around the world to pay attention to the situation of political prisoners and human rights and religious freedom in Tibet, East Turkestan, and Inner Mongolia, and urged the Chinese Communist authorities to relax their hard-line policies against them. The TPiE reaffirmed its call to the Chinese government leaders to engage in substantive dialogue based on a mutually beneficial "Middle Way" policy, stressing that this is in line with the wishes of His Holiness the Dalai Lama and has been adopted by the Parliament.

In its statement, the Speaker thanked the international community for its concern and support for Tibet's just struggle and expressed its conviction that the Tibetan issue will continue to be a subject of discussion in the parliaments of the United States, European countries, Japan, and India in the future. The statement encouraged Tibetans to unite and realise the demands of Tibetans within their borders. “Their suffering today is somewhat similar to what the people of Tibet had been put through some seventy years ago when the People’s Republic of China invaded Tibet and unleashed a campaign of violent repression under its occupation rule”, the statement reads. It also offered prayers that the people of Ukraine may soon be freed from their current hardships.