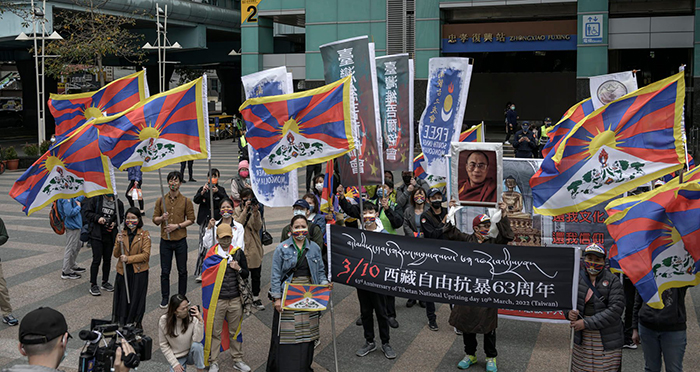 Taipei— As the 63rd anniversary of the Tibetan uprising approaches on March 10, 2022, Taiwan-based non-governmental organisations(NGOs) organised a peace march in Taipei on March 5, 2022, to commemorate the martyrs who sacrificed their lives for the cause of Tibetan freedom from 1959 to the present.

Activists also discussed the situation of political prisoners in Tibet on March 9 and plan to continue their activities on March 10, 2022.

According to a press statement released by the Office of Tibet in Taiwan on March 9, 2022 on Tibet.net, Taiwanese NGOs led by the Taiwan Tibetan Welfare Association and Tibetan Youth Association in Taiwan organised various forms of commemorative events in Taiwan every year to mark Tibetan National Uprising Day.

The statement mentions that on March 1,2022, the Office of Tibet in Taipei attended a three-hour live debate with Geshe Lharampa Jamphel Khentse, Dr Dolma Tsering and Tsering Tharchin (research student), which focused on the historical accounts of Tibetan Uprising Day and His Holiness the Dalai Lama's four commitments, as well as other issues.

A press conference was held on March 2, 2022, attended by members of the Taiwan Parliamentary Group for Tibet, including MPs Hung Sun-Han, Wang Wan Yu, and Lin Ching-Yi, and was widely covered by the news media. Finally, the organisers scheduled a peaceful march on March 5, for the Tibetan National Uprising Day.

On March 5, the peaceful march participated by Taiwanese parliamentarians, Uyghurs, Hongkongers, Ukrainians, NGO representatives, Taiwanese and Tibetans officially started in central Taipei. The marchers held up banners with various slogans and protest demands, shouted slogans and performed a short play about the demolition of the Buddha statue in Kham Draggo, Tibet.

Various representatives, led by parliamentarians, spoke at the rally one after another to express their support. The day was also marked by the promotion of the publisher's book "Solidarity with Tibet" by Gangjong.

The statement concluded by noting that the Taiwanese NGO also invited representatives of the Office of Tibet to a debate on March 9, about political prisoners in Tibet. The cycling campaign to commemorate the 63rd Tibetan Uprising Day, launched by Tashi Tsering, President of the Tibet Human Rights Network, on December 10, last year, ended on March 9. In addition, the Tibetan community in Taiwan will continue its campaign in solidarity with Tibet on March 10, the 63rd anniversary of the Tibetan National Uprising Day.