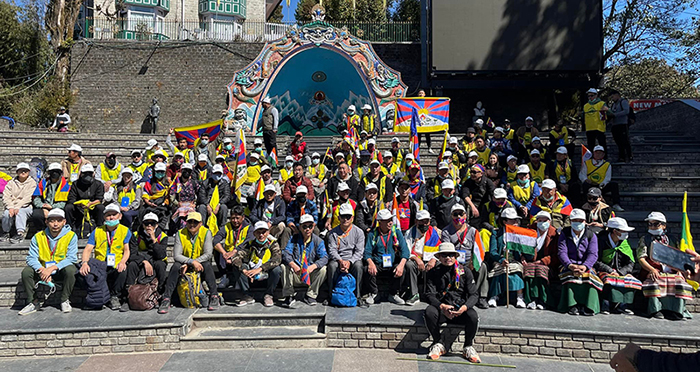 Darjeeling, India — About 150 Tibetans, young and old, participated in a peaceful 80 km march from Darjeeling to Salugara (Siliguri) to raise awareness about the critical situation in Tibet and to show solidarity with the Tibetans inside Tibet.

On March 7, 2022, the peace march began in Darjeeling, West Bengal, India. The peace march is organised by the North East Regional Tibetan Youth Congress. The participants come from Kalimpong, Darjeeling, Gangtok, Ravangla, Sonada, Mirik, Kurseong, Salugara. Among the 150 Tibetans, the oldest is 78 years old and is called Pema Dhondup, and the youngest is 16 years old and is called Tenzin Sonam (girl). They will walk about 80 km from Darjeeling to Salugara (Siliguri), West Bengal State, India.

Jinpa Tashi, president of the Northeast Regional Tibetan Youth Congress, told TPI, "Our peace march is to show solidarity with Tibetans inside Tibet, who are suffering from the brutality of the Chinese regime and policies, including the latest self-immolation of the famous Tibetan singer Tsewang Norbu, as well as a protest against the Chinese government's ongoing repressive policies in Tibet, including the recent demolition of the Buddha statue and monasteries.”

“On the other hand, to remind Tibetans and the people that we had an independent country, Tibet belongs to the Tibetans, we have our own language, culture and religion. We must commemorate the 10th march, to remember our great warriors, who sacrificed their lives for the cause of Tibet,” he continues.