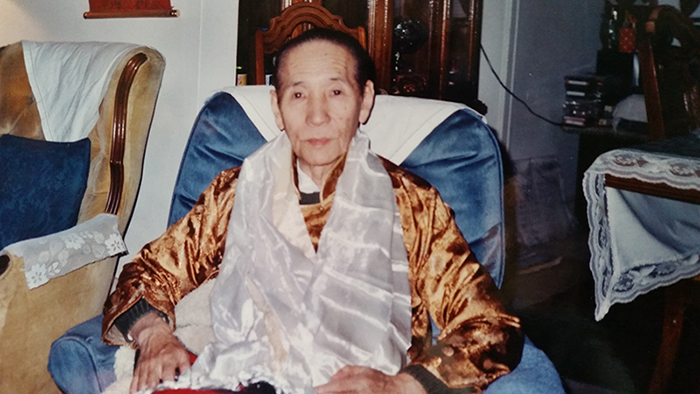 My father was born in Lhasa, Tibet into the Yabshe Samdrup Phodrang family, a direct descendent of the 7th Dalai Lama, Kalsang Gyatso (1708-1757) and Dromton Gyalway Jungnay (1004-1064), founder of the Kadampa Buddhist tradition. His mother was a daughter of the Kunsang Tse family. He was recognized as the reincarnation of Drubwang Tokden Shakya Shri (1853-1919), the great Chagchen & Dzogchen master of Tibetan Buddhism from Chamdo, Kham by the 7th Kharag Yongdzin Rimpoche Ngag gi Wangpo (1895-1962). He studied Tibetan at Tarkhang School in Lhasa, Tibet where he is known to have excelled in his studies among all the students. He married my mother, Dechen Yangkyi Sekshing in 1951, in Lhasa Tibet.

In 1959 he escaped Tibet via Nathu la, the border between Sikkim and Tibet, with his family and close relatives. In 1960, he began his service in the newly re-established Tibetan Government-in-Exile after receiving a letter from His Holiness the 14th Dalai Lama.

The following are the various departments where he served:

Below are some of the non-governmental positions he held:

In addition to this, he worked in several voluntary positions including, editing Buddhist dharma texts and biographies, and as a consultant in Tibetan language and music, to name but a few. If it was work related to the Buddha dharma, he always did it on a voluntary basis.

My late father, during his lifetime, was not only able to benefit the Buddha dharma but humanity as well. His extraordinary legacy is to continue to be remembered as the most humble, decent, and gentle soul I have ever known. A great human being and a wonderful father. A great loss for all of us.

He is survived by his wife, my mother, and me. Tseten Sampho, daughter.