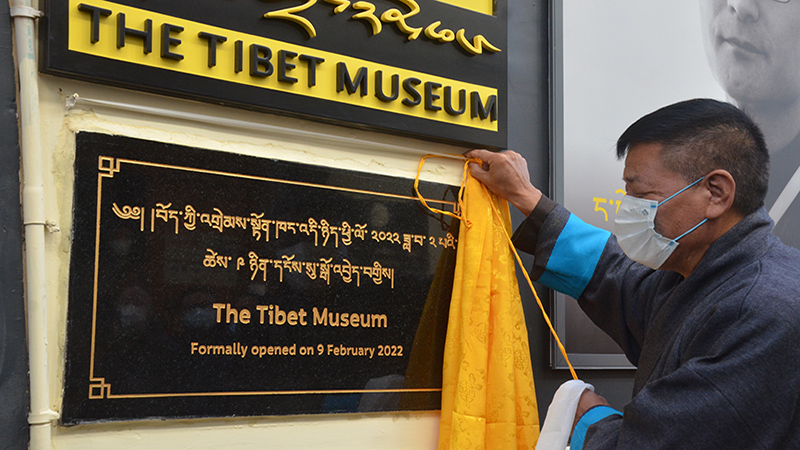 Dharamshala, India — “The Tibet Museum highlights our cultural and political struggle and our resilience. The objective of the museum is to educate, increase awareness of Tibet, and tell our story of exile to a global audience,” said Tashi Phuntso, director of The Tibet Museum, while introducing the new Tibet Museum at its inauguration.

The construction of the Tibet Museum started in 2017 and was completed in December 2021. Penpa Tsering, Sikyong(President) of the Central Tibetan Administration (CTA), formally inaugurated the new Tibet Museum at T-Building, Gangchen Kyishong, in Dharamshala, India, on February 9, 2022.

The project was launched in 2017 during the 15th Kashag(Cabinet), under the leadership of former Sikyong Dr Lobsang Sangay, with the aim of disseminating the uncensored history of Tibet to the world and preserving the cultural heritage of Tibet.

The inauguration ceremony was attended by Sikyong, Kalons (Ministers), and other top officials of CTA and, parliamentarians, representatives, and leaders of Tibetan non-governmental organisations based in Dharamshala.

Introducing the new Tibet Museum and its history, Tashi Phuntso, Director of the Tibet Museum, said, “the Tibet Museum is a museum made by and for Tibetans. Its aim is to challenge the representations of Tibet and the Tibetan people that feature in museums in China, Europe, and North America. Here, we tell a different story. Tibet in this museum has a past, a present, and a future. Through objects, archives, photographs, and personal testimonies we highlight Tibet's historical, political and international importance by showcasing our culture, recent history in exile, and the teachings and legacy of His Holiness the Dalai Lama. We also address the many crises facing Tibetans in Tibet today such as human rights abuses, exploitation of the environment, and curbs on cultural preservation.”

“The Tibet Museum highlights our cultural and political struggle and our resilience. The objective of the museum is to educate, increase awareness of Tibet, and tell our story of exile to a global audience,” the director added.

“In 2016, the CTA announced plans to build a new Tibet Museum in Gangchen Kyishong, Dharamshala, the seat of Central Tibetan Administration. After several years of research and development the new Tibet Museum was completed in December 2021 and formally opened on 9 February 2022,” Tashi explained.

"I commend the previous Kashag and former Sikyong Dr Lobsang Sangay for the successful inauguration of the museum today," said Sikyong Penpa Tsering of CTA. Sikyong also expressed his gratitude to donors for their financial support and thanked the experts and technicians for their collaboration and guidance. The project was made possible by major donors such as USAID, Tibet Fund, and NED.

"What is more important now is to ensure that the sponsors' contributions and investment in expertise are not wasted," Sikyong continued, adding that the museum is a key means of drawing international attention to Tibet's political concerns.

"All our achievements and our remarkable work today were made possible by the guidance and visionary leadership of His Holiness the Dalai Lama. We must therefore always remember his kindness and be grateful for his guidance," said Sikyong. Sikyong also reassured Tibetans around the world, and especially those in Tibet, that His Holiness the Dalai Lama is in good health.

Norzin Dolma, Kalon of the Department of Information and International Relations (DIIR) stressed the importance of the newly inaugurated Tibet Museum and said "this exhibition hall is an important place of knowledge where the past history and present reality of Tibet is formed by evidence of images, documents, and materials.”

She also emphasised the importance of the museum in educating young Tibetans about their cultural identity, Tibet's political history, and its current status.

There are ten permanent exhibitions in the Tibet Museum, as follows:

This section introduces visitors to the idea of Tibetan culture as an act of resistance. Drawing on Lhakar, a Tibetan-led, non-violent protest movement, the displays celebrate Tibet's rich culture through dress, religion, food and literature. The displays also highlight the many ways Tibetan culture has been rebuilt and preserved by Tibetans in exile.

This section includes a detailed timeline of important moments in the history of Tibet, from the first Tibetan king to the Chinese invasion in 1950. This section also showcases objects, films, and documents which testify to Tibet's status as an independent nation.

This section bears witness to China's occupation of Tibet and its devastating aftermath. Through photographs, objects, and historical documents, the display examines the impact of the 'Seventeen-Point Agreement', the 'Democratic Reform', and the 'Cultural Revolution' on Tibetan governance and culture.

This section calls attention to Tibetan resistance to China's policies in Tibet. It draws on key moments in the fight for resistance - the 1959 uprising, the Mustang resistance, the Nyemo revolt, and 1987, 1988, 1989, and 2008 uprisings in Tibet. Through commissioned film, personal testimony and photography the displays ask for quiet and respectful consideration of the many ways Tibetans have resisted China's continuing occupation of Tibet.

This section documents the difficult journeys undertaken by Tibetans who left Tibet for exile. Using personal testimonies, film, donated objects, and photographs the displays map out the many reasons why Tibetans left Tibet and the dangers faced along the way. This section also includes an Archive of Escape, a chance for the visitor to record their own personal and family memories of escaping and travelling to safety.

This section reflects on the Tibetan exile experience. It sheds light on rebuilding Tibetan society in exile, the creation of a Tibetan Government in Exile and, through a series of visual histories and personal testimonies, how Tibetans re-established cultural institutions across India and the wider world.

The section highlights the impact of China's policies on Tibet today. Using personal testimony, the research of human rights groups and investigative journalism displays map out some of the tools used by China's Communist Party to repress Tibetan culture while at the same time turning Tibet into a police state whose people are under constant surveillance.

The section considers China's impact on Tibet's environment and concerns over large-scale deforestation, mining and dam projects, and the impact of glacial melting on Tibet and its neighbouring countries, including India. The displays also ask visitors to reflect on Tibet's importance as the Earth's 'Third Pole' and provider of fresh water and food security for over a billion people in nations across South and East Asia.

In this section, visitors are introduced to a new generation of Tibetans who are re-defining and re-imagining what it is to be Tibetan. Here, we showcase the success stories of Tibetans living around the world in the fields of literature, arts, sports, medicine, music, education, academia, and politics.

The opening hours of the Tibet Museum are from 9:00 am to 5:00 pm, Tuesday to Sunday. The Tibet Museum is closed on Mondays and all public holidays. The admission fee is Rs:20 for adults and free for children. There are also daily documentary film screening at 3pm and Tibet awareness talk series, every Friday at 3pm at auditorium of the Tibet Museum.