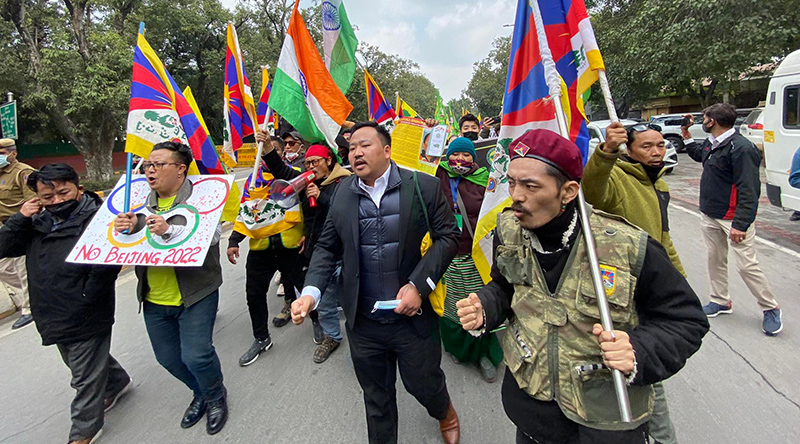 TYC activists in Delhi protest against the Chinese government on the opening day of the Beijing 2022 Winter Olympics, February 4, 2022. Photo: TYC

Delhi — Tibetan activists and Tibetans staged a protest against the opening of the Beijing Olympics in front of the Chinese embassy in Delhi, saying that the Chinese government is using the Olympics to whitewash its crimes against Tibetans, Uighurs, Hong Kong, and other minorities under Chinese occupation.

On February 4, 2022, Tibetan Youth Congress(TYC) organised a protest against the Chinese government on the occasion of the opening of the Beijing 2022 Winter Olympics. More than 100 demonstrators participated in the protest rally and some of the activists were detained by the Delhi Police during the demonstration and later released.

“The Olympic game is a game of glory and an opportunity for sportsmen and women to share the spirit of love and friendship and promote peaceful solutions to the conflicting issues around the world in a fair and friendly manner. But this time it is hosted in Beijing. China - a country that has a record for their Human Rights Violations and for committing genocide of Tibetans, Uyghurs, and others who are colonized and controlled under an oppressive and repressive system,” a statement from TYC said.

“It is hosted by a regime that continues to commit gross Human Rights violations in Tibet and continues to demolish and destroy the monastic institutions down to ashes. Recently, before a month countdown to the Beijing Winter Olympics, the Chinese government forcefully demolished a 99-foot Buddha statue and burned down 45 prayer wheels amid a wave of ongoing demolitions in Draggo county and other parts of Tibet. And the CCP continues to detain and imprison Tibetans for expressing their disapproval of the hardline policies, and inhuman treatment,” TYC explained.

“The situation in Tibet has sharply deteriorated since the Beijing Olympics in 2008 and an alarming number of Tibetans continue to die in custody under Chinese authorities and many have burned themselves in protest against China,” they said.

“The brutal policies of the Chinese government are increasingly being recognised by the diplomatic boycotts from countries including the US and others,” TYC added.

“The 2022 Beijing Winter Olympics run a serious risk of legitimising these abuses. Despite the increasing abuses against Tibetans, Uyghurs, Hongkongers, Taiwanese, and Inner Mongolians, China has faced no challenge from the IOC,” the activists stated.

“Therefore, we urge the international community and the world leaders to condemn the IOCs complicity in sports washing crime against humanity and to make China accountable for not only posing a threat to the survival of Tibetan culture and identity but also for posing a strategic and security threat to the free nations of the world,” they warned.

“We believe Olympians are people of conscience who are committed to the Olympic Charter and its Fundamental Principles of Olympism that include a focus on "the harmonious development of humankind, promoting a peaceful society concerned with the preservation of human dignity", and rights and freedoms for all "secured without discrimination of any kind", the activists said.

The Tibetan activists of the TYC urged the athletes to return the blood-stained medal that has cost countless lives as a sign of solidarity with them: “therefore, we urge and appeal to the participating athletes to show their support and solidarity to our fight for the just cause by returning the blood-stained Medal that has cost countless lives; a medal made up of the minerals extracted by exploiting the rich natural resources of the Tibetan plateau and a medal known for the history of oppressions.

“We, therefore call to condemn the Beijing 2022 winter Olympics, the Genocide Games and make China Accountable for the appalling rights abuses and crackdowns on dissent,” the statement concluded.