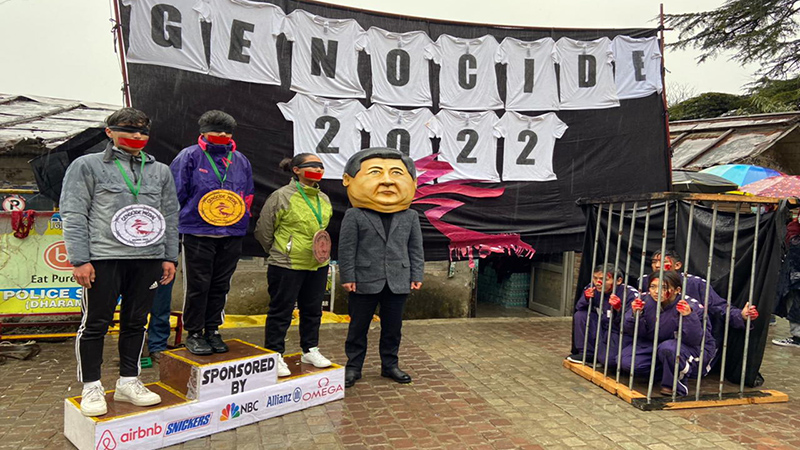 Dharamshala, India — “What is happening in Tibet alone is sufficient to justify a boycott of Beijing 2022. From the recent sentencing of Tibetan intellectuals and activists like Go Sherab Gyatso, to the destruction of a giant Buddha statue in Drakgo, Tibet, the Chinese government is hellbent on eradicating Tibetan culture and identity,” said Rinzin Choedon, national director of SFT-India.

Tibetan activists from Students For a Free Tibet (SFT) India joined the global protest with a symbolic "Genocide Games" photo action from Dharamshala, India, on February 3, 2022. On the same day, Tibetans from all over the world, including France, Switzerland, the United States, Australia, and Canada, held a protest against the Beijing 2022 Olympic Games.

“Awarding the 2008 summer Olympics Games to Beijing did not prove to be a catalyst for improvements in the rights and lives of people who live under Chinese rule. Beijing treated the award to be an endorsement of its policies, so campaigners fear awarding the 2022 Winter Olympics to China would encourage China to increase repression,” a statement from SFT said.

“2008 Olympics heralded restrictions on a range of freedoms and marked the beginning of an intense period of repression in Tibet, but the situation continues to deteriorate, with the new Chinese leadership’s increasingly hostile crackdown on civil society, especially in Tibet and East Turkestan,” it continues.

“Chinese government’s policies have created a crisis in Tibet and provoked an unprecedented wave of self-immolations by monks, nuns, and laypeople. More than 155 Tibetans have set light to themselves in Tibet since 2009; the vast majority have died,” the activists said.

“Under President Xi Jinping, Chinese authorities have been committing mass abuses against Uyghurs, Tibetans, ethnic groups, and religious believers from all independent faith groups. They have eliminated independent civil society by persecuting human rights activists, feminists, lawyers, journalists, and others. The government has eviscerated a once-vibrant civil society in Hong Kong, expanded tech-enabled surveillance to significantly curtail the rights to expression, association, and peaceful assembly, and allowed the use of forced labor, in violation of international law,” they added.

“What is happening in Tibet alone is sufficient to justify a boycott of Beijing 2022. From the recent sentencing of Tibetan intellectuals and activists like Go Sherab Gyatso to the destruction of a giant Buddha statue in Drakgo, Tibet, the Chinese government is hellbent on eradicating Tibetan culture and identity. One million Tibetan children and youth living in China's colonial boarding schools in Tibet where their language and identity are under attack. This number does not include four and five-year-olds made to live in boarding preschools,” said Rinzin Choedon.

“Several governments, including Australia, Canada, Japan, Lithuania, the United Kingdom, and the United States, have announced a diplomatic boycott of the Games in response to the Chinese government’s human rights abuses. They will send no senior officials – a longstanding Olympic tradition – to the opening or closing ceremonies. All governments, whether joining the diplomatic boycott or not, should use the opportunity to not only support the athletes participating in the Games, but also demonstrate concrete support for human rights defenders across China,” the statement concluded.

“Those participating in the Beijing Olympics face a host of human rights risks. IOC rules prohibit athletes from publicly expressing their views on human rights in China on the Olympic podium, and Chinese authorities’ retaliation against critics creates a chill for athletes worldwide. The Chinese government’s recent open threat to athletes stating they’ll be in danger if they speak out in support of human rights or were critical of the Chinese authorities clearly undermines the safety of the athletes,” said Tenzin Lekdhen, Campaign Coordinator of SFT-India.