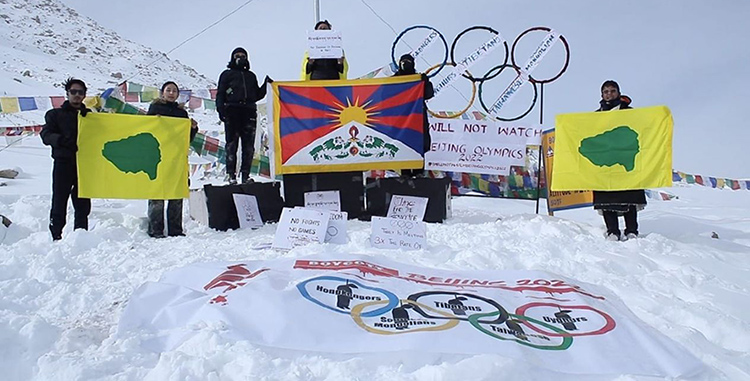 The Regional Tibetan Youth Congress and the Regional Tibetan Women's Association in Leh, organised a protest against the Beijing 2022 Winter Olympics on January 23, 2022 in Leh, Ladakh, India, and called on all Tibetans and the people to observe 4 February 2022 as a black day to protest against the commencement of the Beijing 2022 Olympics on this day.

The 24th Winter Olympic Games 2022 will be hosted by Beijing on February 4, 2022, once again after the 2008 Olympics. To protest against Beijing being awarded the right to host the Olympics, the RTYC Leh and RTWA Leh have called on all Tibetans to observe a black day on February 4, to oppose the Chinese Communist Party's(CCP) human rights violations in all occupied territories.

A statement from the two organisations declared, “On February 4, 2022, the government of China is hosting 24th Winter Olympic Game at Beijing for yet another time. International Olympic Committee turned deaf and blind to CCP autocratic regime and let her host this leading sports event despite criticism faced from many countries on its human rights policies.”

“We the members of RTYC, Leh, and RTWA, Leh requests every Tibetan around the world to observe this day as Black Day throughout Tibetan communities. A BLACK DAY to protest against China and its role in slaughtering millions of Tibetan, Uyghur, and Inner Mongolians,” the statement further stated.

Adding on about the Black Day, the statement continued, “A BLACK DAY to raise our voice against forced disappearances of religious leaders and activists. A BLACK DAY to question against the establishment of largest forced labour camps (East Turkestan) in today’s world.”

The statement concluded by adding, “The list goes on and therefore it is high time to observe this day. Let the world know not to fall into the trap of CCP lies.”

The #NoBeijing2022 movement has been going on for months in opposition to the IOC's decision to allow Beijing to host the Olympic Games again. It has received support from major governments, including the US, UK, Australia, Canada, Japan, Lithuania, Belgium, Denmark, and Estonia, who have decided to launch a diplomatic boycott of the Beijing Games. The Winter Olympics are scheduled to begin on February 4 and end on February 20, 2022.