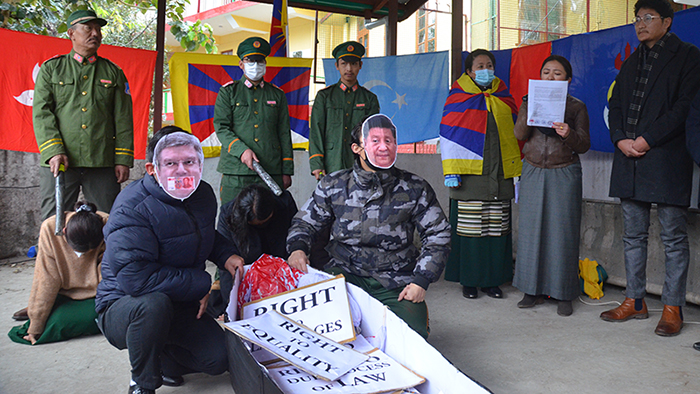 On January 4, 2022, Tibetan Youth Congress, Tibetan Women’s Association, National Democratic Party of Tibet, Gu-Chu-Sum Movement Association of Tibet, and Students for a Free Tibet-India held a demonstration at Mcleod Ganj in Dharamsala against the 2022 Winter Olympics to be held in Beijing on 4 February 2022, as part of a joint global day of action, marking the one-month countdown to genocide Beijing Olympics.

According to the press statement released today by the five non-governmental organisations, “activists and their supporters are calling on governments, Olympic Committees, Olympic Sponsors, and all people of conscience to take a stand against one of the worst human rights crises of our times by boycotting the 2022 Beijing Winter Games”.

Tibetan activists requested the athletes to reach out to the Students for a Free Tibet for getting educated about the Chinese Communist Party, their horrific human rights abuses, and how the athletes can become allies to the millions of suffering people.

They also gave five poignant reasons to athletes to join with them on the Global Day of Action. They featured Dhondup Wangchen, a Tibetan filmmaker and activist who was arrested and sentenced to six years in prison by the Chinese government for talking to Tibetans after the 2008 Beijing Olympics; Ilham Tohti, an Uyghur economist and scholar currently serving a life sentence in a Chinese prison on a “separatism” charge; Joshua Wong, a prominent Hong Kong pro-democracy activist and leader of the Umbrella Movement, currently in jail after being arrested under the National Security Law; Peng Shuai, one of China's most famous tennis players, who disappeared after accusing the former Vice President of sexual assault; and Tenzin Nyima who was arrested twice and later died in prison due to mistreatment and torture.

The boycott call aims to “build pressure on China to take positive, tangible steps to end the overwhelming human rights situation”. They also called on India, as the largest democracy in the world to join the United States, Lithuania, New Zealand, Scotland, Belgium, Australia, UK, Canada, and Kosovo in announcing a diplomatic boycott of the Games.

The #NoBeijing2022 movement has evolved into a global initiative and urged international governments, leaders, and especially athletes to take cognizance and has invited them to talk about the Uyghur genocide, Tibet’s brutal occupation, China’s crackdown on democracy in Hong Kong.

As part of the Global Day of Action, protests against the Beijing Olympics were also held in Australia, France, Belgium, Switzerland, the USA and Canada.