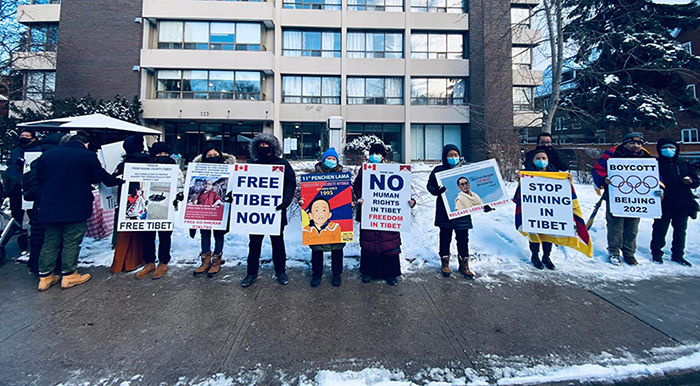 Toronto — Tibetans and representatives of five Tibetan non-governmental organizations (NGOs) in Toronto, Canada held a peaceful candlelight vigil to protest the Chinese communist government's crackdown in Tibet and to express solidarity with the plight of Draggo County, eastern Tibet, where sacred Buddha statue and 45 prayer wheels have been destroyed by China recently.

During the peaceful demonstration, Tibetan protesters held placards calling for freedom for Tibet and an end to human rights violations in Tibet. The demonstrators chanted slogans such as "Free Tibet", "Stop genocide in Tibet", "China gets out of Tibet now", "The world is watching" and "Shame on the Chinese Communist Party", "Stop the second wave of cultural revolution in Tibet" and "Boycott Beijing 2022".

"Today, we are again standing in front of this Chinese consulate to show our solidarity with our brothers and sisters in Draggo county in Kharze, who are suffering irreparable losses. The CCP government has once again carried out a despicable action against the dissemination of our culture and spiritual beliefs by destroying the 99-foot statue of Lord Buddha and 45 large prayer wheels near Draggo monastery by the Chinese authorities," said Sonam Wangyal, General Secretary of Canada Dhokham Chushi Gangdruk, while representing the five NGOs.

“The destruction of both the statue and the rows of large pairs of wheels were profoundly infringed on the freedom and the dignity of all the Tibetans and the monastery community from which these form a tangible part of expressing and continuing on history, our spiritual belief, our religion, our culture on a daily basis. We condemn these repressive actions and brutal implementations of the Chinese Communist Party’s hardline policies against the Tibetans in Tibet,” he added.

“We also urge every government in the world to follow the stand of the US government to impose further diplomatic boycotts against China for their gross human rights violations against Tibetans and Uighur Muslims,” Sonam concluded.

In December 2021, the Chinese Communist Party (CCP) initiated the demolition of the 99-foot-high sacred Buddha statue and destroyed 45 huge prayer wheels near a monastery in Drago County. The giant statue was erected by the monks and lay communities in the county on May 5, 2015, by spending 40,000,000 Yuan to prevent the danger of war, natural disasters, and other catastrophes. This statue was erected with authorizing permission from the local district office.

This action is one of many repressive policies launched by the Chinese government to undermine Tibetan cultural and religious identity. Tibetans in exile have been calling for an end to the Communist government's repressive regime in Tibet and stood in solidarity with the critical situation in Draggo county, Tibet. According to earlier reports, the Chinese authorities also burned Tibetan prayer flags (Mani flags) and threatened monks with arrest and punishment if they did not assist destroy the statue.

Since the Chinese Communist Party invasion of Tibet in 1949, the Tibetan population has been subjected to continuous political repression, cultural assimilation, social discrimination and marginalisation by the repressive policies of the Chinese government. The people of occupied Tibet and those in exile have staged several peaceful protests against the occupation of Tibet. Recently, there has been a massive protest against the upcoming 2022 Olympic Games in Beijing.