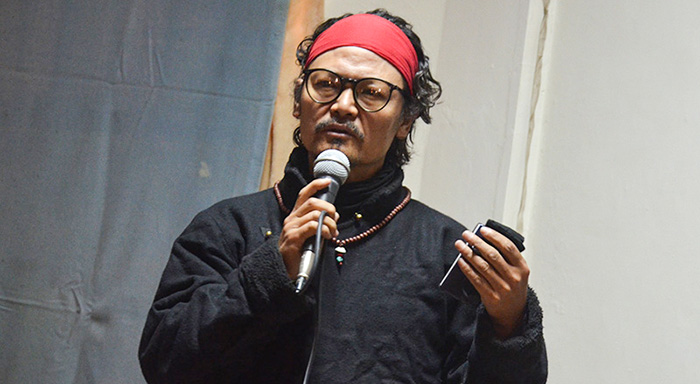 Dharamshala, India — “Walking the Himalayas is my travel plan to journey through the Indian Himalayas to create more awareness about the 70 years of Chinese occupation of Tibet and its impact on Indian Himalayas, and also the growing Chinese security threats on India,” said Tenzin Tsundue, while addressing a press conference organised by the Indo-Tibetan Friendship Association in Dharamshala.

Tibetan writer and activist Tenzin Tsundue, who had been on a journey of the Himalayan states for 127 days under the initiative “Walking the Himalayas” and concluded his journey in Dharamshala on December 22, 2021.

Tsundue began his journey on August 14, 2021, in an attempt to show the traditional, cultural, and political relations between the Indian Himalayan states and Tibet, and to understand how the Tibetan issue is perceived by the people living in these states. He also aimed to highlight the plight of Tibetans living under the dictatorial rule of the Chinese government. Throughout the journey, he uses local transportation and spends most of his time on foot through villages, remote nomadic areas and border regions.

“This zigzag and detours, travelling almost every day for 127 days I must have covered at least 20,000 kilometres. I have been keeping a day-to-day diary which I publish on my social media illustrated by pictures which has its own audience. We are also documenting this journey on video and hope to make a documentary of people, ,places and history that we witness,” he said.

In this journey, Tsundue travelled with a projector, a soundbox, and a bedsheet-screen to screen the 80 minute Hindi film ‘Escape of the Dalai Lama from Tibet’ in villages, markets, schools, and civil societies. The film shows the Chinese occupation of Tibet and Chinese military pressure across the Himalayan borders. Further, Tsundue conducted creative writing workshops or poetry reading sessions in cafes, courtyards or around bonfires for local youths wherever possible.

“With this film on His Holiness the Dalai Lama we have been able to connect with the Himalayan Indians on the issues of language, culture, and the people-to-people relationships, stories of old trade routes, customs, and marriages,” he said.

At the end of each screening, Tsundue noticed that the reactions of the public to the film were very different. However, when he talked about India's Himalayan border, everyone in the Himalayas said, "Our border is with Tibet. It is Tibet's border, not China's border." He also pointed out that the teachings of His Holiness the Dalai Lama are prevalent in these areas.

“Screening the film for more than one hundred times, our audiences have been deeply touched by the story of Tibet and His Holiness the Dalai Lama's unflinching faith in Karuna and Ahimsa. Many Ladakhis said although His Holiness the Dalai Lamas is their spiritual guru, almost like their God, they confessed that they are ashamed that they didn't know the real story of the Dalai Lama who had personally endured such physical and emotional challenges. People in Spiti and Kinnaur said that the Dalai Lama's presence in India has helped them keep their language, culture, and religion alive, therefore they are forever grateful to him. People in UP and Bihar said that the Dalai Lama is continuing the great legacy of Karuna and Ahimsa taught by Gautam Buddha and Mahatma Gandhiji,” he further added.

Tsundue also expressed disappointment at the lack of awareness among common people about Chinese regressive policies. He condemned the Chinese government's attempts to build roads and resettle populations in the border areas, which have created insecurity.

“Although the government and the Indian Army are doing everything necessary, I observed on this journey that the common people in the border regions have little to no awareness about China's expansionist policies, and its current activities across the borders,” he said.

“The most shocking thing I realised through this journey is how closely people of the Himalayas are related to Tibet, not only by trade, language, culture, and customs, but by family bonds. There are tens of thousands of people in the Indian Himalayas who were once subjects of Tibet and they say there are many more inside Tibet who once lived in the Indian Himalayas. There has been a partition in the Himalayas and no one is talking about the severed Himalayas,” he concluded.

Tsundue thanked the organisations and individuals who supported him in the journey. He also expressed his gratitude to the natives of the Himalayas who supported his work as an act of faith to His Holiness the Dalai Lama and thanked them for their contribution to the Tibetan freedom movement.