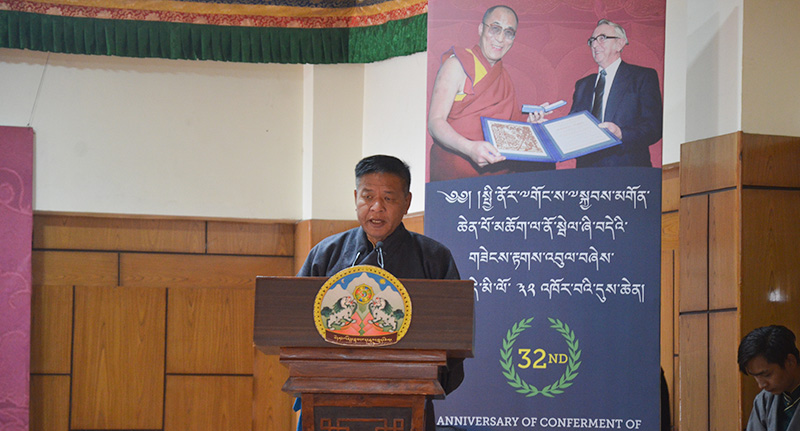 Sikyong Penpa Tsering delivering the Statement of the Kashag on the 32nd Anniversary of the Conferment of the Nobel Peace Prize on His Holiness the Dalai Lama of Tibet, in Dharamshala, on December 10, 2021. Photo: TPI/Yangchen Dolma

“Today marks the 32nd anniversary of the conferment of the Nobel Peace Prize on His Holiness the Great 14th Dalai Lama. On this momentous occasion, the Kashag on behalf of Tibetans in and outside Tibet, pays its immense gratitude to His Holiness and implore him to continue his meritorious services for aeons. We also extend our warm greetings to the Tibetan people,” said Penpa Tsering, Sikyong of CTA, while reading out the Kashag’s statement.

“In accepting the prize, His Holiness the Dalai Lama said the prize is a recognition of the true values of altruism, love and compassion and non-violence, which he practices in accordance with the teachings of the Buddha and the great sages of India and Tibet. His Holiness said he accepts the prize on behalf of the oppressed, those who struggle for freedom and work for world peace, and of course the six million Tibetan people inside Tibet who have suffered and continue to suffer so much. His Holiness also said he accepts the prize as a tribute to the man who founded the modern tradition of non-violent action for change – Mahatma Gandhi – whose life taught and inspired him,” Sikyong continues.

“His Holiness the Dalai Lama’s philosophy of love and compassion results from rigorous study, training and practice since his childhood. One can feel the immeasurable depth of his compassion through His Holiness’ ‘Words of Truth’, which he composed on 29 September 1960, barely a year and a half after coming into exile. In the ‘Words of Truth’, instead of harbouring hatred and enmity against the invaders of our country, His Holiness the Dalai Lama writes that their cruel actions done out of delusion are objects of compassion, and prays that they “achieve wisdom to abide in the glory of friendship and love.” At a time when the whole of China, including Tibet, was in the throes of the disastrous Cultural Revolution, His Holiness the Dalai Lama in the Tibetan National Uprising Day statement of 10 March 1971 said that “in spite of the fact that we Tibetans have to oppose Communist China I can never bring myself to hate her people” and that hatred is weakness and anything achieved through hatred can neither be lasting nor binding. His Holiness asks how can we hate the Chinese whose minds are governed by their leaders and how can we hate the leaders who have themselves in the past been so persecuted and suffered so much for their nation,” he added.

“At the same time, His Holiness the Dalai Lama laid the foundation for preserving and developing the Tibetan religion, culture and education, and sustainable livelihood of the Tibetans. His Holiness democratized the exile Tibetan governance and consistently appealed for support from the concerned countries and the United Nations to resolve the Sino-Tibetan conflict. The adoption of non-violence and mutually-beneficial means of dialogue with the Chinese government to resolve the Sino-Tibetan conflict in 1973 led to the establishment of contact with China and subsequent visits of Tibetans to meet their relatives in and outside Tibet and dispatch of a series of fact-finding delegations to Tibet,” the statement explained.

“In his letter to China’s paramount leader Deng Xiaoping on 23 March 1981, His Holiness the Dalai Lama wrote that “we must improve the relationship between China and Tibet as well as between Tibetans in and outside Tibet. With truth and equality as our foundation, we must try to develop friendship between Tibetans and Chinese through better understanding in the future. The time has come to apply our common wisdom in a spirit of tolerance and broad-mindedness to achieve genuine happiness for the Tibetan people with a sense of urgency.” Consequently, four fact-finding delegations and two exploratory missions were dispatched to Tibet. Although no meaningful solution to the Sino-Tibetan conflict came out, these efforts had a significant influence on the Chinese government to adopt liberal policies on the revival of Tibetan religion and culture and language, and improvement in Tibetan people’s standard of living in Tibet,” the statement said.

“His Holiness the Dalai Lama began his foreign visits with Southeast Asia in 1967, Europe in 1973, North America in 1979 and to most of the free countries from 1980. Although the visits’ objective was non-political issues like religion and culture, His Holiness made tireless efforts to seek resolution of the Sino-Tibetan conflict through dialogue and create a strong basis that Tibetan Buddhism and culture have the potential to bring peace and happiness to humanity. His Holiness made the promotion of secular values such as altruism, love, compassion, non-violence, peace and harmony among societies and nations his life-long commitment. These efforts won great admiration and support of the people across the world,” it stated.

“The conferment of the Nobel Peace Prize on His Holiness the Dalai Lama strengthened the determination and courage of Tibetans inside Tibet, and helped Tibetans in exile find a new approach on the international stage. It has built a solid foundation and an unending well-spring of support for the issue of Tibet among the Chinese intellectuals and the international community. It also helped create a valid basis for Middle-Way Approach as the lasting means to resolve the Sino-Tibetan conflict,” CTA Sikyong said.

“Taking the opportunity, I extend my warm greetings and deep gratitude to India, the United States and other governments, Tibet Support Groups and friends for their unwavering support for the cause of Tibet. Finally, I pray for the long life of His Holiness the Dalai Lama, the apostle of world peace. May all of the wishes of His Holiness be fulfilled and may peace prevail over the world,” Sikyong concluded.