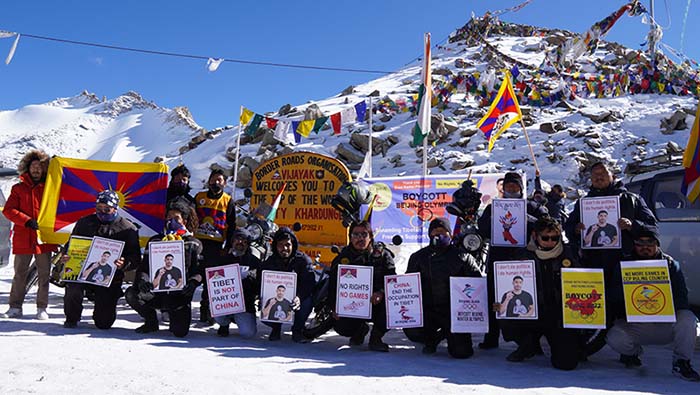 On December 4, 2021, two months before the start of the 2022 Beijing Winter Olympics, the Sonamling Tibetan Settlement Freedom Support Group organized a bicycle rally from the town of Leh to the Khardung La Pass in Ladakh (the highest motorable road in the world, the border between Tibet and India) to boycott the 2022 Beijing Olympics.

There were 17 activists, including six bike riders, carrying banners and placards that read: "Boycott Beijing 2022," "No Rights, No Games," " No More Games in CCP ruling country," "Tibet is Not Part of China," "China, End the Occupation in Tibet," and "Thank You, Enes Kanter Freedom”.

“Olympic Games are the world's leading international sporting event. The vision of the IOC is to build a better world through sport. But, starting today (December 4), February 4, 2022, the most authoritarian regime (China) will host the Winter Olympic Games in Beijing. In terms of human rights violations, China is the least free country with the worst record of human rights violations. No freedom of speech and expression in Hong Kong, forced labor camps for Uighurs, enforced disappearances of lamas such as the Panchen Lama, and imprisonment of environmentalists and Tibetans in Tibet,” said Dawa Dolma, one of the activists.

“At the same time, brutality and repression that Chinese communist party is doing for a very long time are well known to everyone, but still people remain silent about them. The question I would like to pose to the International Olympic Committee is, is China really building a better world by doing all these(violations of Human Rights in Tibet and Hong Kong)?, boycott 2022 Beijing Olympics, we can not let this blood game happen again and again,” she added.

“So, today, we, the Sonamling Tibetan Settlement Freedom Support Group organized a bike rally to boycott Beijing Olympic 2022. We also extend our heartfelt gratitude to Enes Kanter Freedom for speaking out about Human Rights violations in Tibet and support for the truth and for standing with Tibetans, Uyghurs, Hong Kongers, Taiwanese, and Inner Mongolians,” the activist concluded.