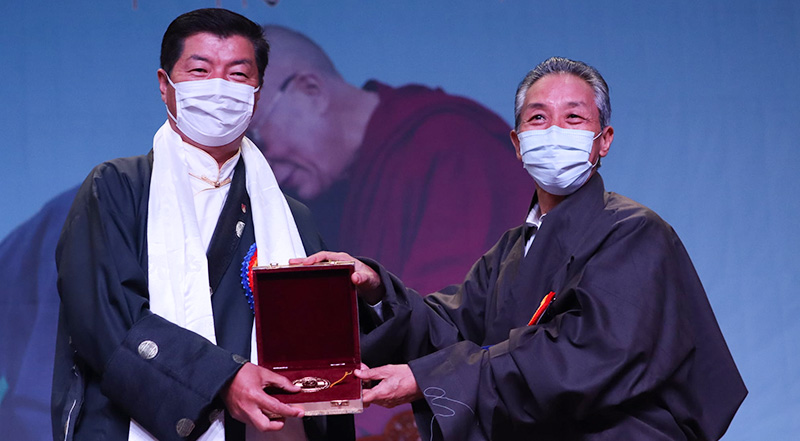 Dharamshala, India – Tibetan communities in the USA, Europe, and India presented Awards of Gratitude to former President Dr Lobsang Sangay and ministers of the 15th Kashag for their outstanding leadership and for their significant contributions to Tibet and its people.

On November 3, 2021, Lithang Award Committee held a gratitude ceremony for His Holiness the Great 14th Dalai lama and Dr Lobsang Sangay, former President of Central Tibetan Administration(CTA) and ministers of the 15th Kashag at the Tibetan Institute of Performing Arts(TIPA) Hall in Dharamshala, H.P, India.

Dr Sangay unveiled two books published by Lithang Association, then he presented certificates and white scarfs to the toppers Geshes and Geshemas from Monasteries, as well as Gaden Phodrang award and Sikyong Award for Academic accomplishment students from Tibetan Schools.

Dr Sangay unveiled the two books published by the Lithang Association, and then he presented certificates and white scarfs to the outstanding Geshes and Geshesma of the monasteries, as well as to the recipients of the Gaden Phodrang Award and the Sikyong Academic Achievement Award.

Addressing the audiences, Dr Lobsang Sangay said, "It is important to give us awards to encourage us to do more for the cause of Tibet, but more important than that, we should give awards to our root guru, His Holiness the 14th Dalai Lama, because of whom we have achieved what we have achieved today. Therefore, we should always remember his kindness and follow his advice."

"We should also study, research, and understand his teachings, especially his four commitments, the first to promote human values, the second to promote religious harmony, the third to preserve Tibetan language and culture, and the fourth to revive ancient Indian knowledge. These four commitments help not only individuals but also families, societies, nations, and the world. Therefore we should learn more about these and put them into practice for the benefit of all beings," said, Dr. Sangay.

At the ceremony, Central Tibetan Tsawa Association, Tibetan Chupo Association, and Central Minyak Welfare Association presented Gratitude Awards to former President Dr Lobsang Sangay and ministers of the 15th Kashag for their significant contributions to Tibet and its people.

On November 5, 2021, the Tibetan community in Samyeling, Delhi, India, presented a Gold medal to former President Dr Sangay for his contribution and service to the people of Tibet for more than ten years. On November 6, 2021, the Tibetan Bawa Community of North America, presented the Kham Bawa Gold Medal of Honor to the former President Dr Sangay for his profound achievements and outstanding leadership for more than ten years.

Many gratitude ceremonies for His Holiness the 14th Dalai Lama and the 15th Kashag have been held in, the United States, Belgium, Switzerland, and India.