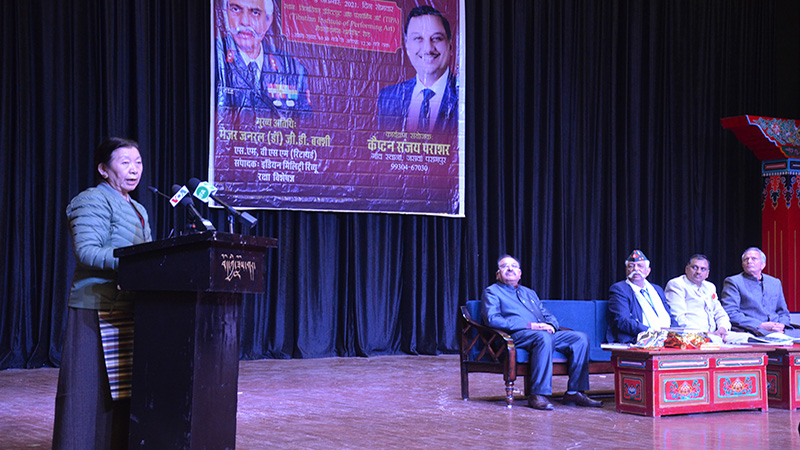 Dharamshala, India — “Tibet has written history of 2,000 years, Tibet has never been a part of China before China invaded Tibet in 1959,” said Dolma Tsering, the Deputy Speaker of Tibetan Parliament-in-Exile on November 8, 2021, referring to the Indo-Tibetan and Chinese issues.

“Tibet has 2000 years of written history and Tibet has never been a part of China, before China invaded Tibet in 1959. Every one of us must know this and whenever we talk about Tibet, we must mention that Tibet was a free country and it was never part of China. Since Tibet was not represented in the United Nations organization, when China occupied, invaded, and destroyed Tibet, the whole world watched,” said Dolma Tsering, the Deputy Speaker of Tibetan Parliament-in-Exile.

“There are different views on self-immolation, but we Tibetans believe that these sacrifices are the highest sacrifice that can be made with compassion because, they have never harmed the smallest ant and they are sure that with their burning, no infrastructure should be destroyed and they are burning their place. So, I believe this is the highest sacrifice any human being can make, but instead of addressing the various causes of despair, China is putting the blame on His Holiness the Dalai Lama, and what a failure the Chinese leadership is, they always have the easy way out,” she continued.

“Instead of addressing the root causes of freedom of speech, freedom of assembly, and freedom of religion, China has reinforced its various stupid policies. They have launched a campaign to disregard His Holiness the Dalai Lama, and it is a crime for anyone who keeps a picture of His Holiness the Dalai Lama to go to jail. I do not think the world has reached the point where it is a crime to keep a picture of your root guru. China is doing all of this because the world is turning a blind eye to all of its criminal acts, crimes, and human rights violations. China is a signatory to all international, universal human rights, but they are doing all the criminal work of humanity. Therefore, this is a critical time for the international community to ensure that China is held accountable for its wrongdoings in Tibet. For this reason, we Tibetans need to work even harder now,” Dolma expressed.

"Not only that, their atrocities are not over yet, mass surveillance, we all know that in Lhasa, there are more CCTVs than windows, people are being monitored everywhere, even their homes. This surveillance makes them desperate because every move of Tibetans is watched by the CCP, when two people meet and talk for more than two minutes they are questioned, is this the rule of law? The rule of law in China is for the world to see, but all this rule of law is covered up by local directives that can prohibit and punish people associated with self-immolators, if you are a friend or family member of a self-immolator then you are punished and the community is deprived of all help from the center, which in turn violates the UN law against torture,” the Deputy Speaker said.

“Tibet has become a prison and the world does not see the atrocities that are happening in Tibet because Tibet is cut off from the world and no one is allowed to enter Tibet. The only thing China dares to do is to issue white papers every year, and what do these white papers tell us, these white papers tell us that everything is not going well. China is afraid to send international journalists and international observers into Tibet because the situation in Tibet is so terrible. China wants Tibet, but it doesn't want Tibetans. The reason why China wants Tibet is that Tibet is the world's water tower. China has built the most dams, China wants to control the water to gain power, and China is now weaponizing the water,” Dolma stated.

"Whenever anything bad happens against their laws and policies, they (China) blame it on His Holiness the Dalai Lama, but at the same time, they want to capture the institution of the Dalai Lama, how hypocritical is that?. Even after 60 years of atrocities and torture, they (China) cannot gain the trust of the Chinese people, they may have tortured the Tibetan people physically, but they cannot take away the faith and belief in His Holiness the Dalai Lama. Therefore, His Holiness remains an irreplaceable jewel in the hearts of the Tibetan people,” She concluded her speech.

Captain Sanjay Prashar (project organizer) expressed his solidarity with Tibet and promised to continue supporting the Tibetan cause in the future.

Chief Guest Major General G.D. Bakshi shared his experiences with the Tibetans and expressed solidarity with them. He also spoke about how India fought China in 1962 and how the Indian Army was different from the 1960s. India trained its army well and fought many wars in the 1960s and 1970s. Major General G.D. Bakshi said, "We are not looking for wars, but we do not like to be pushed, and in some ways or some places we have to give back."

General Bakshi is a combat veteran. He is the author of 40 books, the editor of the Indian Military Review, and a motivational speaker. He is a long-time supporter of Tibet and has always been opposed to China's illegal annexation and occupation of Tibet.