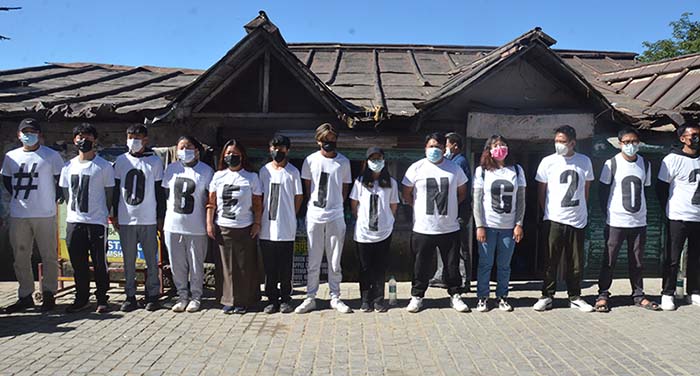 Dharamshala, India — Tibetan activists and supporters protest wearing shirts with the words "#NOBEIJING2022" on the handover ceremony of the Olympic flame to the Beijing 2022 Olympic Organizing Committee delegation at the Panathenaic Stadium in Athens, Greece, October 19, 2021.

A group of Tibetan activists and Tibetan supporters protested at Mcleod Ganj in Dharamshala, India, against the Chinese government's oppression, occupation, and genocide of Tibet, and the IOC's failure to address human rights issues in China.

"On Monday, October 18, 2021, official Olympic flame lighting ceremony for the Winter Olympics was held in ancient Olympia, three activists protesting human rights abuses in China successfully got into the archaeological site, where the flame lighting ceremony for the 2022 Beijing Winter Olympics and ran toward the newly lit torch holding a Tibetan flag and a banner that read "No genocide games," the statement reads.

"Today, the flame will be delivered to the Beijing 2022 Organising Committee delegation at a Handover Ceremony at the Panathenaic Stadium. As IOC President Thomas bach has stated "the Olympic Games always build bridges" and it is intended to represent global unity, but global unity cannot rest on the backdrop of oppression, occupation, and genocide. The street protest today is to send a clear message to international organisations and governments to implement targeted sanctions against China and boycott the Beijing Olympics 2022," they said.

"The Chinese government has publicly stated that Beijing 2022 will be "open and inclusive" create a "harmonious world" and promote "social progress" - just as it did ahead of the Beijing 2008 Summer Games, but to no avail," it continues.

"Much like in 2008, the International Olympic Committee (I0C) has attempted to counter concerns about human rights abuses in China by asserting that the Games will positively affect China's rights record. China's policy of Sinicization has caused the assault on all the Tibetan national identity, most notably their language, religion, and culture with its appalling evidence of the recent industrial-scale crackdown around the possession of the Dalai Lama's photo in Dza Wonpo," it added.

"The IOC also pledged to take action, should China fall short in meeting its human rights promises. However, subsequent developments showed this faith to be misplaced as the Chinese government repeatedly turned back on the human rights pledges it made to secure the right to host the Games and there was no accountability by the loC and the international Community. Instead, China was given a free pass to wantonly violate human rights and fundamental freedoms," the statement said.

"The International Olympic Committee has entirely failed to address the issue that China - the hosts of the Bejing 2022 Olympics, even When they have pages worth of evidence of China's human rights abuses that are not fit to uphold the values of the Olympic Truce; that all humanity is called upon to lay down its weapons and work towards building the foundations of peace, mutual respect, understanding, and reconciliation.' The IOC cannot continue to hide behind its supposed "political neutrality" as an excuse to ignore China's abhorrent human rights abuses," said Tenzin lekdhen, the Campaign Coordinator Students For a Free Tibet, India.

"Everyone knows host countries use the Olympics for political purposes and, while the I0C remains in denial, China is once again preparing to use the 2022 platform as part of its 'soft power' arsenal to help divert global public opinion away from its abysmal human rights record and, ultimately, positively reshape its standing in the world. Your supporting and participating in the Beijing Olympics is equivalent to supporting and endorsing its nonstop human rights atrocities," said Tenzin Passang, the Program Coordinator of Students For a Free Tibet, India.

"Given the I0C's failure to act, it falls on Governments to take a stand against China's human rights atrocities by boycotting Beijing 2022. There is a genocide underway by the Chinese government and world leaders must stand together on the right side of history by staging a diplomatic boycott of the 2022 Beijing Winter Olympic Games. The alternative action of showing up at the Games will simply further embolden China and support its attempt to 'sport wash' the most heinous of human rights abuses," one the protestor said.

"A boycott would deny China the chance to turn the brutal and illegal occupation of Tibet - which has seen Tibet ranked as the least-free country in the world alongside Syria - and the genocidal treatment of the Uyghur people into a PR victory," they concluded.