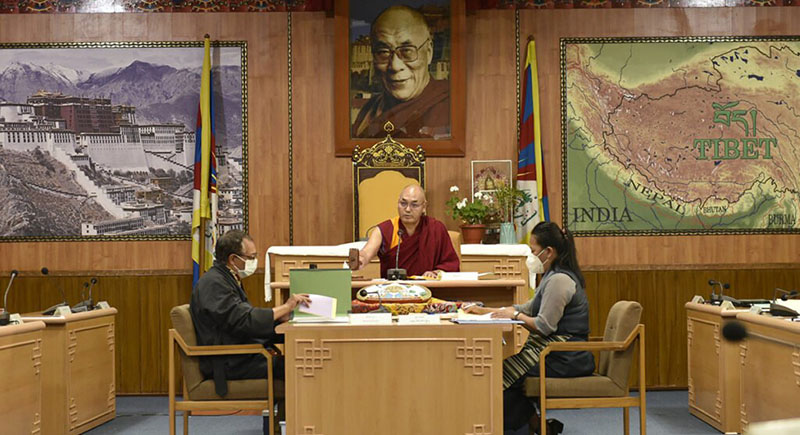 The first session of the 17th Tibetan Parliament-in-Exile is scheduled to be held for two days from October 11 to 12, 2021. The Speaker of the Tibetan Parliament, Khenpo Sonam Tenphel, presided over the meeting, while the Deputy Speaker, Dolma Tsering, members of the 17th Parliament and Sikyong(President) Penpa Tsering of 16th Kashag.

The session began with the opening remarks of Khenpo Sonam Tenphel, Speaker of the Tibetan Parliament. In his opening remarks, he greeted the parliamentarians and reiterated the determination of the Tibetan Parliament to fulfill the aspirations of Tibetans in Tibet. The Speaker also said that it is a destiny for each MP to be elected to serve the cause of Tibet and urged the MPs to be fully committed to urgently resolving the Tibetan issue through joint efforts as they open a new chapter of Tibetan democracy.

“With the rapidly evolving global politics, China is impacted to gradually shift its policy toward the changing spectrum of global governance. This shift in China’s global policy is evidently impacting its hardline policy toward Tibet,” remarked Speaker and urged the members of the parliament to lay their opinions and contribute constructive suggestions in a healthy manner abiding by the parliamentary procedures.

The 17th Tibetan Parliament in Exile unanimously passed eight official resolutions of mourning to condole the demise of two former parliamentarians and some prominent Tibet supporters on its first-day meeting. The parliamentarians also approved three women to serve as Kalon (ministers) of the 16th Kashag, which was nominated by Sikyong Penpa Tsering.

On the second day of the first Session of the 17th Tibetan Parliament-in-Exile, parliamentarians unanimously adopted an official gratitude resolution and one official resolution of solidarity with the sufferings of the Tibetan people inside Tibet.

The official resolution highlighted the noble deeds of His Holiness the Great 14th Dalai Lama and his gracious guidance, especially in ending the stalemate in the Tibetan Parliament that had lasted for nearly four months. The resolution expressed gratitude to His Holiness for his enlightening guidance and apologized for the discordant situation. It further prays with great hope that His Holiness the Dalai Lama may live for a hundred aeons, and at the same time resolves to work collectively for the common cause of Tibet.