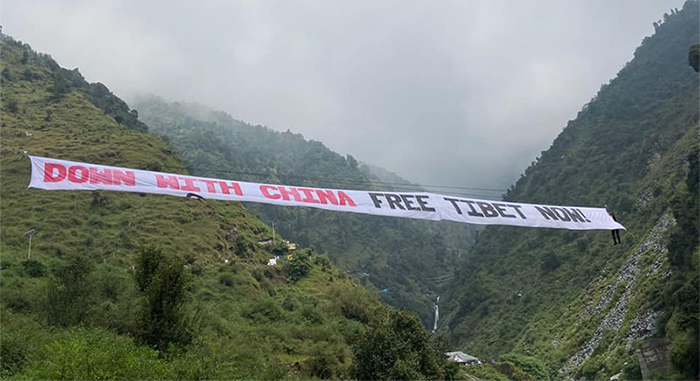 "Down with China, Free Tibet Now" to protest of China's illegal occupation of Tibet. Photo: file

On October 1, 2021, Tibetan activists from Students for a Free Tibet - India and Tibetan National Democratic Party in India staged a 70x6-foot banner action at Bagsu in Dharamsala that read "Down with China, Free Tibet Now" to protest of China's illegal occupation of Tibet.

“On 1st October 2021, As the Chinese communist regime gears up to celebrate its 72nd founding anniversary of the People's Republic of China, it is a day of grief to its occupied countries like Tibet, Uyghurs, Southern Mongolia, Hongkong and Taiwan. Over 1.2 million Tibetans have perished since China's invasion of Tibet in 1949,” said the joint statement of the organizations.

“Severe restrictions of basic human freedoms, arbitrary arrests, incommunicado detentions, torture and unnatural deaths have all become the traits of Chinese rule in Tibet. The grim human rights situation inside Tibet is nowhere more appalling evident than the fact that the recent industrial scale crackdown around the possession of the Dalai Lama's photo in Dza Wonpo is part of a continuing crackdown on Tibetan resistance in the region that can be traced back to protests in 2019,” the statement explained.

“The CCP crackdown against freedom, democracy, and human rights has intensified beyond belief and international governments must come together to take strong. joint, immediate action to send a clear message to China and boycott the Beijing winter Olympic 2022 games which only attempts to sport wash the most heinous of human right abuses,” the organizations said.

"China cannot be allowed to use the games to showcase itself as a respectable, open, and free country when it is the worst of the worst for human right atrocities. A boycott will build pressure on China to take positive, tangible steps to end the overwhelming human rights situation," said Tashi Dhondup, office socretary of National democratic party of Tibet.

“I am calling for world leaders to boycott Beijing 2022, it is crucial that the state push back against China's massive campaign of repression in East Turkistan, Tibet, Hongkong, Southern Mongolia and stand with like minded allies in unified opposition. The International Government has the power to change Beijing's behavior and must not attend Beijing 2022," said Tenzin Passang, Program coordinator of Students for a free Tibet-India.

“China's human right violation and propaganda has reached far beyond its border, so going to Beijing 2022 will be seen as a clear endorsement of China's horrific campaign of repression and human rights abuses. We are calling upon all the governments, sponsors, athletes, and people of conscience everywhere to resist the Chinese Communist party and boycott Beijing Olympics 2022,” the Tibetan activists urged.

Tibetan activists and supporters of Tibet from Taiwan, France, Britain and India also protested on the 72nd anniversary of the founding of the Chinese Communist Party to show the world the human rights violations committed by the Chinese government in Tibet and Uighurs, Southern Mongolia, Hong Kong and Taiwan.