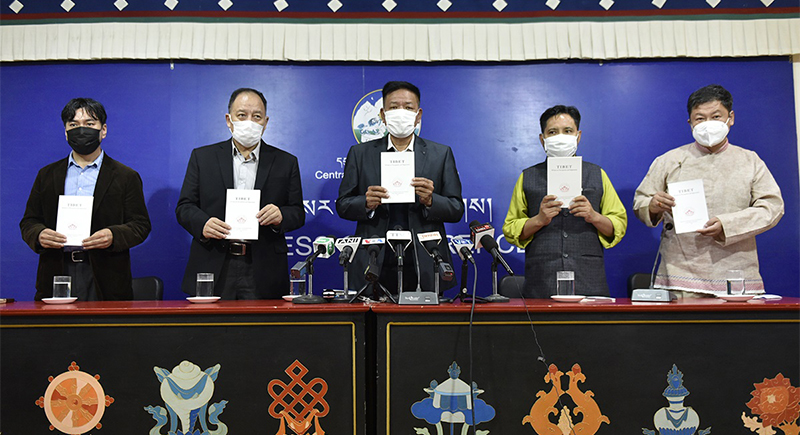 On Thursday, September 30, 2021, the Central Tibetan Administration's (CTA) Department of Information and International Relations (DIIR) held a press conference at the CTA's Lhakpa Tsering Hall to launch a new book titled Tibet: 70 Years of Occupation and Oppression as an official response to Chinese White Paper, “Tibet Since 1951: Liberation, Development and Prosperity” ahead of the 72nd anniversary of the founding of the People's Republic of China.

After unveiling the book, Sikyong Penpa Tsering said." We are releasing this book a day before the founding of the Communist Party in response to a white paper issued by the Chinese government on May 23, 2021. The white paper titled “Tibet Since 1951: Liberation, Development and Prosperity”, to response to the white paper, we issued a response titled as Tibet: 70 years of Occupation and Oppression, there is nothing to celebrate about this.”

He further explained the main points of the book and said that among them were “Invasion Disguised as “Peaceful Liberation”, “17-Point Agreement”, “China’s Intensive Surveillance Strategies in Tibet”, “China’s Relentless Attempt at Appropriating Tibetan Religious Tradition,” “Human Rights Violations in Tibet,” “China’s 70 Years of Environmental Destruction in Tibet,”. “But Past is past, what is more, important is that we need to move forward to resolve Tibet issue through Middle-Way Approach”.

“Ever since the invasion and occupation of Tibet by the PRC (also simply referred to as ‘China’ in this study), the government and the Chinese Communist Party (CCP) which controls it, have maintained Chinese rule in Tibet by an oppressive regime that uses force and the installment of fear among the people. Today, the subjugation of Tibetans is pursued by means of increased securitization, intensified surveillance and a narrative on development, all of which are used as a political tool to integrate Tibet with China. Development in Tibet is driven by Beijing’s assimilationist objectives and its own strategic interests. In essence, Chinese rule in Tibet is colonial as it bears all the fundamental characteristics of colonialism. It is alien, oppressive, exploitative, and colonializing. It relies, as other colonial regimes have, on the narratives of superiority and virtue of Chinese culture and ideology and the ‘backwardness’ of the Tibetan ‘Other’. It also relies on myths invented to make Tibetans feel or forced to feel the generosity being bestowed on them by Beijing, especially in the form of development and prosperity,” the book explained.

“The Party’s rule in Tibet is imposed on the Tibetan people and the voices of dissent are crushed by brute force. The gross human rights violations in Tibet and elsewhere documented by independent rights groups speak volumes about the nature of the regime, as well as the Chinese government’s and the Party’s insecurity and lack of legitimacy in Tibet. Despite Beijing’s lack of legitimacy to rule over Tibet, PRC is implementing laws and regulations to assert the Communist Party’s primacy in Tibetan Buddhist institutions, society and culture,” it continued.

“Contrary to China’s claim, Tibet was not historically a part of China, but was seized by force as the People’s Liberation Army invaded Tibet from 1949 to 1951. The claim that Tibet was “liberated” is part of a narrative aimed at legitimizing what was and continues to be an illegal occupation of Tibet,” the book declared.