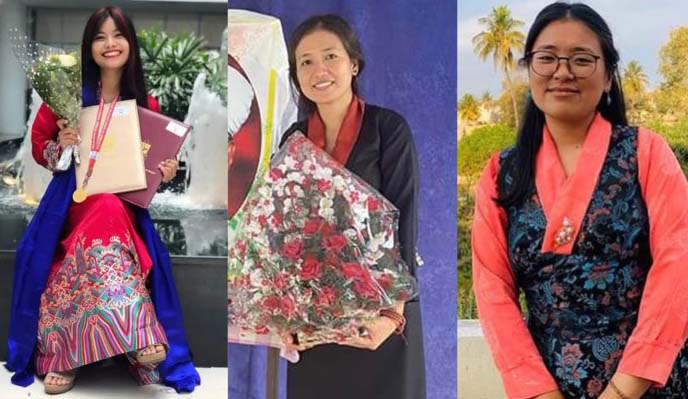 Meanwhile, on August 19, 2021, Tenzin Noryang, a BSN student at KLE College of Higher Education and Research in Belagavi, Karnataka, was awarded a gold medal for her outstanding performance in the exam.

Dickyi Palmo escaped from Tibet to India in 2003. She studied at TCV Suja School. In 2018, she pursued a bachelor's degree in English, journalism, and public administration at the Dalai Lama Institute of Higher Education in Bangalore, southern India. She then went to the University of Mysore (UoM) to pursue a Master of Public Administration and graduated in 2020, receiving a gold medal with excellence in both years of examinations.

Tenzin Tseyang was born in the Tibetan settlement of Bylakuppe in southern India. In 2018, she studied for a bachelor's degree in history at the University of Mysore in southern India. on September 7, 2021, she received Professor B Sheik Ali Endowment Gold medal for her outstanding performance in her examinations.

Tenzin Noryang was born and raised in the Mundgod Tibetan Settlement and completed her schooling at the Central School for Tibetans Mundgod. She then pursued her Bachelor of Science Nursing at the KLE Academy of Higher Education and Research, Belagavi, Karnataka State.

Department of Education(DoE) of the Central Tibetan Administration congratulated Tenzin Noryang, the Gold Medal medalist in Bachelor of Science Nursing, KLE Academy, “We are happy to present her this award as a token of our appreciation for her hard work. We also hope that many more Tibetan youngsters will be inspired to excel in their own respective academic field," said Sonam Sangmo, Section Head of DoE’s Scholarship Section.