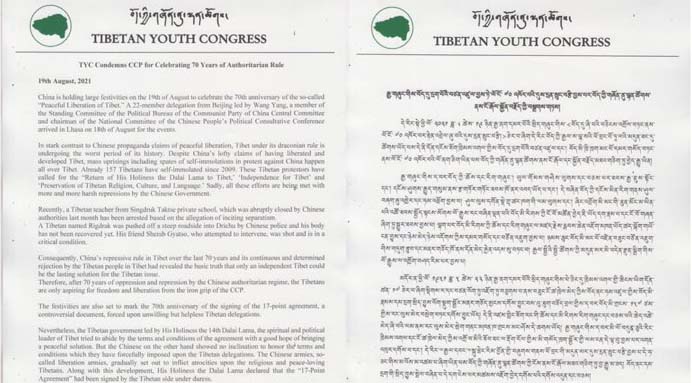 Dharamshala, India — Tibetan Youth Congress(TYC) condemned the Chinese Communist Party's celebration of the 70th anniversary of the so-called "peaceful liberation of Tibet," saying, ‘We condemn their attempts to coerce Tibetans to celebrate these events as a victory and liberation, while Tibetans continue to suffer under the authoritarian and oppressive rule of the Chinese Communist Party.’

On August 19, 2021, the Chinese Communist Party celebrated the 70th anniversary of the so-called "peaceful liberation of Tibet" in Lhasa, the capital of Tibet, while the Tibetan Youth Congress condemned its celebrations and stated that Tibetans in Tibet live under oppressive policies and that their true desire is the return of His Holiness the Dalai Lama to Tibet and the independence of Tibet.

“China is holding large festivities on the 19th of August to celebrate the 70th anniversary of the so-called "Peaceful Liberation of Tibet." A 22-member delegation from Beijing led by Wang Yang, a member of the Standing Committee of the Political Bureau of the Communist Party of China Central Committee and chairman of the National Committee of the Chinese People's Political Consultative Conference arrived in Lhasa on 18th of August for the events,” said a statement, issued by TYC.

“In stark contrast to Chinese propaganda claims of “peaceful liberation”, Tibet under its draconian rule is undergoing the worst period of its history. Despite China's lofty claims of having liberated and developed Tibet, mass uprisings including spates of self-immolations in protest against China happen all over Tibet. Already 157 Tibetans have self-immolated since 2009. These Tibetan protestors have called for the "Return of His Holiness the Dalai Lama to Tibet, Independence for Tibet and Preservation of Tibetan Religion, Culture, and Language." Sadly, all these efforts are being met with more and more harsh repressions by the Chinese Government,” It explains how the Chinese government has imposed strict controls on Tibetans in Tibet and opposing to the true aspirations of the Tibetan people.

“Recently, a Tibetan teacher from Singdruk Taktse private school, which was abruptly closed by Chinese authorities last month has been arrested based on the allegation of inciting separatism. A Tibetan named Rigdrak was pushed off a steep roadside into Drichu river by Chinese police and his body has not been recovered yet. His friend Sherab Gyatso, who attempted to intervene, was shot and is in a critical condition,” said the statement, while describing what is happening in Tibet recently under Chinese rule.

“Consequently, China's repressive rule in Tibet over the last 70 years and its continuous and determined rejection by the Tibetan people in Tibet had revealed the basic truth that only an independent Tibet could be the lasting solution for the Tibetan issue. Therefore, after 70 years of oppression and repression by the Chinese authoritarian regime, the Tibetans are only aspiring for freedom and liberation from the iron grip of the CCP,” it added.

“The festivities are also set to mark the 70th anniversary of the signing of the 17-point agreement, a controversial document, forced upon unwilling but helpless Tibetan delegations,” they said.

“Nevertheless, the Tibetan government led by His Holiness the 14th Dalai Lama, the spiritual and political leader of Tibet tried to abide by the terms and conditions of the agreement with a good hope of bringing a peaceful solution. But the Chinese on the other hand showed no inclination to honor the terms and conditions which they have forcefully imposed upon the Tibetan delegations. The Chinese armies, so-called liberation armies, gradually set out to inflict atrocities upon the religious and peace-loving Tibetans. Along with this development, His Holiness the Dalai Lama declared that the "17-Point Agreement" had been signed by the Tibetan side under duress,” it explains.

“Therefore, Tibetan Youth Congress condemn their attempt to coerce Tibetans into celebrating the events as victory and liberation, while Tibetans continue to suffer under the CCP's authoritarian and oppressive rule,” they concluded the statement by condemning the Chinese government’s celebration of 70 Years of so-called "peaceful liberation of Tibet" in Tibet.