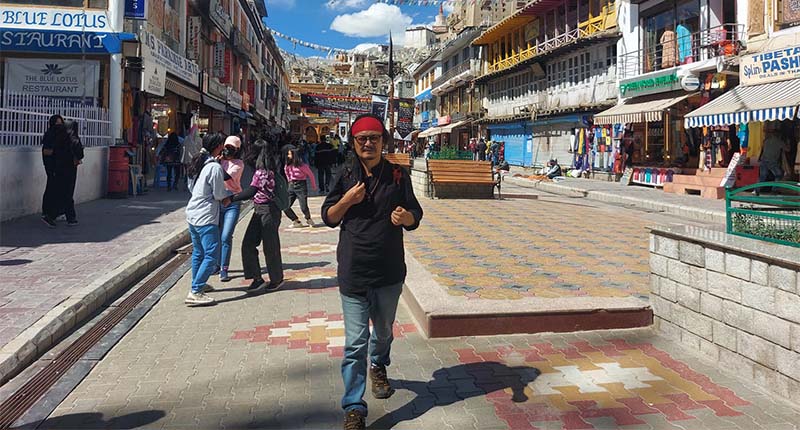 Dharamshala, India — A well-known Tibetan activist TenzinTsundue began his three-month travel from Ladakh to Arunachal, India to raise the issue of Tibet and the importance of Tibet to India's security. “Tibet's independence is in the long-term interest of India, how long can India suffer China?” he said.

“I am going to be traveling the length and the breadth of the Himalayas using local transport which is mostly share-a-jeep facility or buses. But, how much can vehicles take you? Ultimately you have to walk the gravels and crags,” said Tenzin Tsundue, while explaining the mode of travel.

“The Chinese aggression on the borders has left people in the Himalayas shocked and worried. I would like to bring about the Tibet connection in the Himalayas, language, culture and the people to people contact, stories of old trade routes, customs and marriages and new possibilities without China,” the Tibetan activist said, referring to the object of the travel.

“What I will do is carry this film 'Escape of the Dalai Lama from Tibet' produced by Mumbai-based Rangrez Films for Epic TV channel. I will screen this 80 min film in Hindi wherever possible in the villages, markets, schools, civil societies, anywhere. I will be travelling with a projector, soundbox, and a bedsheet screen. This film will make sense of Chinese PLA pressure from across the border. And wherever possible I can conduct a 'Creative Writing Workshop' for local youths or do a poetry reading session in a cafe or someone's courtyard or around a bonfire,” Tibetan freedom fighter explains what he will be doing on his way from Ladakh to Arunachal.

“Tibet's independence is in the long-term interest of India, how long can India suffer China?” he said. He requested his friends to share his post and also organize events in these areas that he mentioned in the list above.