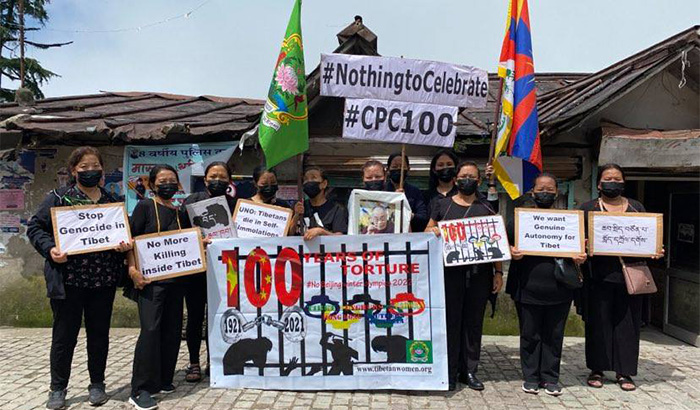 Tibetan Women's Association protest against the 100th anniversary of the founding of CCP. Photo: TPI

Dharamshala, India — Chinese President Xi Jinping made an unannounced visit to Tibet. The visit was met with protests by the Tibetan Women's Association against the Chinese government's atrocities against Tibetans and the celebration of the 100th anniversary of the founding of the Chinese Communist Party on July 1 of this year.

According to sources, the president landed at Meilin Airport in Nyingchi (southeastern Tibet) on July 20. Videos circulating on social media show him addressing a group of people in front of the Potala Palace in Lhasa, Tibet.

The visit is presumed to be related to the 70th anniversary of the 17-point agreement, which China claims marked the "peaceful liberation of Tibet", but the agreement was signed under duress. Tibetan people protested the visit peacefully in Exile, demanding human rights for the Tibetan people.

In a video captured by Tibet Post International (TPI), a group of Tibetan women can be seen holding placards against the Chinese government and the Communist Party at McLeod Ganj in Dharamshala.

Their protest began at the main temple and continued to the main square of McLeod Ganj in Dharamshala, with slogans such as “ Stop genocide in Tibet”, “No more killing in Tibet”, “Release all Tibetan political prisoners”, “Nothing to celebrate CPC100, 100 years of Torture”, “No Beijing Olympics 2022”.

Speaking about the 100th anniversary of the Chinese Communist Party, they said "there is nothing to celebrate" because Tibetans are still deprived of their freedom in their country". We are not happy with them (CCP) because there are still many Tibetans suffering in Tibet. Our protest is in solidarity with those who are suffering," said one of the protesters.

She stressed that the 2022 Winter Olympics in Beijing should be boycotted until Tibetans are free. "We want human rights in Tibet,” she told TPI,

This marks Xi Jinping's third time visit to Tibet, the second being 9 years ago, in 2011 when he was the Vice President of China. The President's visit comes very suddenly as even Chinese media did not report any movement by him two days since his arrival in Tibet.