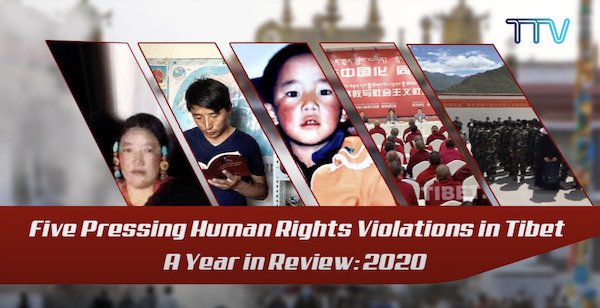 The video highlights five human rights violations: repression of religious freedom, restriction of freedom of expression and opinion, arbitrary arrest, detention, sentence, torture and death, discrimination against Tibetans, internment camps, and coercive militarised labour training. This video uses strong and thought-provoking images and words to highlight incidents of severe human rights violations in the year 2020. It relates the narrative of numerous Tibetans who have bravely persevered in the face of danger for years.

The six-minute video aims to communicate the above-mentioned key messages to the larger public, educating and informing them about the severe human rights violations in Tibet. It was released in English four months ago on Tibet TV's youtube channel. By launching the video in more languages, it aims to expand its reach and make Tibet's voice heard globally.

In the eyes of Tibetans, the 100-year achievements of the Chinese Communist Party are a sad reminder of their ongoing oppression, repression, and discrimination. This is not a story of how China became an economic and military superpower, but a story of CCP repression and non-compliance with international human rights laws.

“The Communist Party of China or the Chinese government is celebrating the centenary with much fanfare and a sense of achievement. However, the fact is that there is hardly anything to celebrate for anyone, including the common Chinese people, other than that China has become an economic and military superpower,” remarked DIIR Secretary Karma Choeying.

“With the videos made in various languages, we hope that a wider audience of the international community will get to know about the human rights situation in Tibet, the atrocities perpetrated against the Tibetans for their very identity of being a Tibetan, which happened last year, and continues to take place in Tibet under the Chinese government,” said Dukthen Kyi, Head of UN, EU & Human Rights Desk.

China, being one of the Permanent Five in The United Nations Security Council and a new member of UNHRC should be ideally advocating and promoting the significance of Human Rights across the globe. On the contrary, it has been identified as one of the world's worst human rights offenders, as evidenced by many reports. Consistent with the emphasis on the fact that the Chinese Communist Party violates the human rights of Tibetans, the year 2020 marks Tibet as the least free country in the world after Syria.