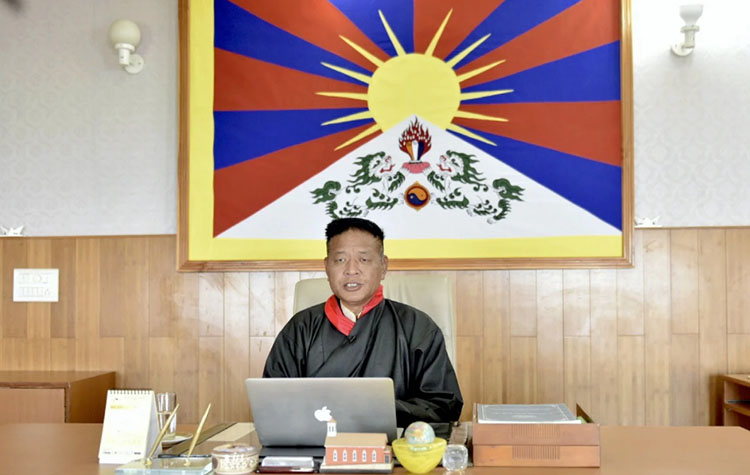 Dharamshala, India — "We will reach out to the Chinese government to find a mutually beneficial, negotiated, non-violent solution to the Sino-Tibet conflict," said Penpa  Tsering, the new president of the Central Tibetan Administration in his inaugural address on May 27, 2021.

We are very fortunate to be blessed by the virtual presence of His Holiness the Dalai Lama at the inaugural function this morning. It is of utmost importance that all of us Tibetans abide by the guidance of His Holiness and the Executive will make every effort to make sure that we follow and act in accordance with the path shown by His Holiness the Dalai Lama. To begin with, I pay my respect and obeisance to His Holiness the Dalai Lama, the protector and Symbol of the people of Tibet and all other eminent holders of the Dharma. At the same time, I extend my good wishes to all my Tibetan brothers and sisters inside and outside Tibet, and all freedom and truth loving Tibet supporters. I also take this opportunity to thank Hon. Speaker Nancy Pelosi of the US Congress, the State Department, Taiwan Foreign Minister, Parliamentary Friends of Tibet, Tibet Support Groups, organizations and individuals for the numerous heartwarming congratulatory letters we received from around the world.

At this point of time following the successful conduct of the 5th direct election of Kalon Tripa/Sikyong by the people to the 16th Kashag and election of the 17th Tibetan Parliament in Exile, it needs no mention that the successes of the exile democratic polity is due only to the benevolence of His Holiness the Dalai Lama.

During this election, participation by 77% of the registered voters and peaceful conduct of the overall election process can be hailed as a victorious step forward in the democratic polity and this victory is due to the combined effort of the Administration and the general public.

In response to the trust and expectations of the majority of the general public in this election, I reiterate my commitment to direct all my energies in carrying out the responsibility of finding a lasting solution for the Sino-Tibet conflict and looking after the welfare of the Tibetan people. The visions that I espoused during my virtual presentations and enshrined in my manifesto are outcome of the experiences gained during many years of public service, and careful study and scrutiny of the changing dynamics of situation in Tibet, China and globally. I have attempted to wholeheartedly present those policies and programs that need to be done, that should be done and that can be done. As per the written directive of the Office of the Supreme Justice Commission, the oath that I took from the Supreme Justice Commissioner today morning, I shall be bound by the faith and trust on the Charter and shall fulfill all my responsibilities in compliance by the provisions therein transcending selfish bias, fear and prejudice, and guided by justness and well intentioned, beyond pretense.

1. The main responsibility of the Kashag is to seek relief from the critical challenges being faced by endangered Tibet and suffering of the Tibetan people. We shall resolutely tread the path of Middle Way espoused by His Holiness the Dalai Lama, that commands high degree of support by general population in and outside Tibet and unanimously approved by the Tibetan Parliament in Exile. Based on which, we will reach out to the Chinese government to find a mutually beneficial, negotiated, non-violent solution to the Sino-Tibet conflict. We hope that this in turn shall set a good example in resolving conflicts around the world.

2. Till such a lasting solution is found, we shall represent the voices of Tibetans inside Tibet and by pooling the resource of every single Tibetan, optimize our global advocacy efforts. We shall monitor and conduct thorough study of the basic issues concerning environmental destruction and protection of the Tibetan national identity inside Tibet. We shall not dither from pointing out the gross mistakes of the Chinese government’s policies and programs and seek to redress, withdraw or amend the wrong policies. Likewise, we will put in every effort to seek increased interaction between Tibetans in Tibet and those in exile and work towards realizing the wish of His Holiness the Dalai Lama to visit China.

3. In future, if and when we need to bring novelty in our approach in tune with the changing situation, we will consult the relevant bodies and decide in accordance with the democratic norms.

4. The Executive shall resort to due consideration, diligence and steadiness in maintaining our relations with India, US and the international community.

5. The Chinese government has on the 21st of this month issued a white paper titled ‘Tibet Since 1951, Liberation, Development and Prosperity’. All I can is say today is that we are open to sending a people to verify all the claims made in the white paper.

1. The preamble of the Charter of the Tibetans in Exile states the realization of the long-cherished vision of His Holiness the Dalai Lama in leading the Tibetans towards a democratic system of governance since coming into exile and the sequence of developments that followed. Division of power that enables meaningful check and balance between the three organs, forms the basis of a strong and vibrant democracy. Therefore, in accordance with the essence of the Charter, the Kashag shall:

a. Accord proper respect and dignity to the office of the Supreme Justice Commission and extend every possible assistance for the effective functioning of the Judiciary.

b. Be responsible to the Tibetan Parliament in Exile and support all programs of the Legislative.

c. Provide necessary assistance to the three autonomous bodies for their progressive functioning while retaining their independent status.

d. Facilitate the media to become a meaningful fourth pillar by upholding their freedom and dignity.

e. Work out with the Non-governmental organizations in consolidating our effort irrespective of their region, religious tradition or political positions.

f. Maintain transparency with all the grassroots organizations on all public undertakings and be responsible, answerable and accountable to the general public.

Functions of the Executive

1. The first job of the Executive is to make clear to all the ministers and officials that we are here to serve the people and they will be directed not to deviate from this primary objective.

2. To implement the policies and programs, the Kashag will give due importance to the experience of the civil servants in our joint effort for desired results.

3. The Executive shall extend all possible support to all monastic institutions irrespective of their affiliation in the preservation and promotion of Tibetan religion and culture as per the guidance of His Holiness the Dalai Lama and the heads of the ecclesiastical order.

4. With the objective of providing meaningful education, interest of the students will be the key factor in determining integration of schools and providing proper amenities for their study.

5. For the development and proper functioning of Tibetan communities, special care would be given to the poor and needy. Depending on the nature of the program, either Top-down or Bottom-up approach would be adopted for effective implementation of programs.

6. While upholding the importance of both the physical and mental wellbeing of the people, emphasis will be laid on preventive healthcare and providing proper medical facilities to the sick and the aged.

7. To meet the objective of financial sustainability of the Administration and the general public, well planned programs to facilitate enterprise, promote skills and start-ups in addition to larger cooperation between the present and former settlement members will be encouraged.

8. Many programs will be devised to harness the capacity and capability of Tibetan intellectuals and youth for the larger interest of the community.

9. The Sikyong will be mainly working on resolving the Sino-Tibet conflict, reaching out to governments and building closer relations between the Administration and the public.

10. The ministers shall accomplish their job as per their portfolio and as stated, shall not cause any reason for concern to His Holiness the Dalai Lama while carrying out their responsibilities.

11. To develop well-defined programs and for effective implementation, a complete understanding of the community is inevitable. Therefore, demographic census would be launched as soon as possible.

1. It is but natural to have differences of opinion in highly contested democratic elections. However, personal prejudices should not be made public issues and likewise, differences in public affairs should not assume personal grudges. We should realize and recognize our true opponent. We lost our country and are political refugees. We all share the common goal of resolving the Sino-Tibet conflict. To resolve issues and disputes within the community, all of us have the right and the means to resolve such issues as per norms, rules and regulations. The executive shall not only respect the right to freedom of expression and listen to reasonable opinions and but also respond appropriately. I earnestly request the general public for better cooperation and responsibility.

2. As I have stated before, if we reach a stage where the elements of Equitable Justice while upholding the rule of law, Cooperative Effort of each one of us and Moving Forward with the objective of progressive future were to be met, we can be assured of moving in the right direction of fulfilling our responsibility for resolving the Sino-Tibet-conflict and taking care of the welfare of our community. With this in view, from today onwards, we will take a new step in opening a new chapter in the course of struggle.

3. On the 23rd of this month, a severe earthquake shook Golog region in Tibet. We express our solidarity with all the Tibetans who have been injured or lost their property due to the natural disaster.

4. One of the first task of the Administration would be to look into what more can be done to contain the spread of Covid-19 within the Tibetan Communities in India and Nepal. We will review the structure of the Covid Task Force both at the Central and local level and take all possible remedial measures. I will be issuing a statement on remedial measures and guidelines by the Administration in a day or two.

5. To conclude, I take this opportunity to thank all freedom loving governments, parliaments and Tibet supporters around the world and in particular, India and the United States for their love and support for Tibet and the Tibetan people till now. Your support is a source of inspiration for all of us in Tibet and in exile. Therefore, I appeal to you to continue to support us till a lasting solution is found.

6. Finally, May His Holiness live very long and may all his wishes be fulfilled effortlessly. May a day arise when the Tibetans in Tibet and in exile rejoice in reunion.