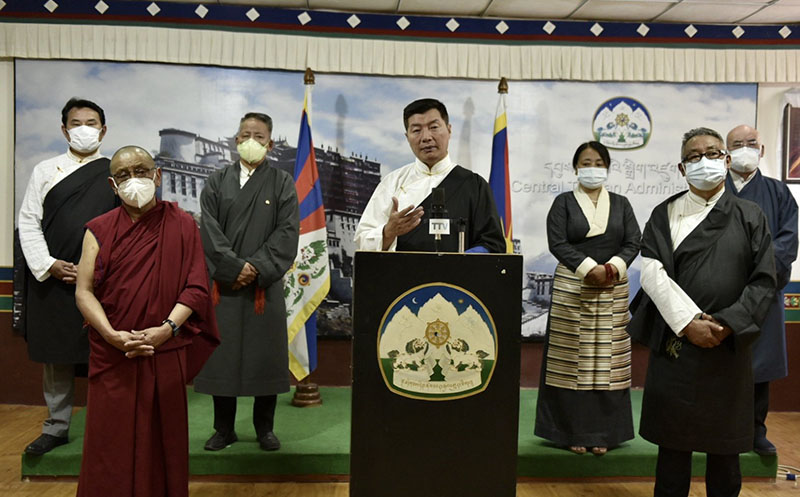 Dharamshala, India — “My role as the Sikyong ends today, but my resolve to fight for the Tibetan cause will continue and will remain strong forever. I was born a freedom fighter and I will die a freedom fighter,” said Dr Lobsang Sangay, the President of the Central Tibetan Administration in his farewell address.

As Dr Lobsang Sangay ends his ten-years term as president of the Central Tibetan Administration(CTA) on May 26, 2021, he gives his farewell address along with Ministers and expressed his gratitude to His Holiness the Dalai Lama, Tibetans both inside and outside Tibet, his colleagues in both the 14th and 15th Kashag, senior advisors, and the dedicated and hardworking staff of the CTA as well as to the supporters of Tibet around the world.

In the past few weeks, so many people and organizations from different countries, including the US, Canada, UK, Italy, Japan, South Africa, and India, have graciously held farewell events to thank me for my ten years of service. Now, it is my turn to say thank you.

I thank my fellow Tibetans, both inside and outside Tibet, for your unwavering support and prayers. Serving you as the Sikyong has been the greatest honour of my life. You gave me the opportunity to fulfill my late father’s last words, which were to be of service to our root guru, His Holiness the Great 14th Dalai Lama of Tibet, and to work for the cause of our occupied nation.

I also thank old and new friends of Tibet for standing with us in our struggle.

When I reflect on my life, I am overwhelmed with a profound sense of gratitude to His Holiness the Dalai Lama. No part of the journey that took a child from a tiny refugee community in Darjeeling and led him eventually to assume the title of the first-ever Sikyong would have been remotely possible without the efforts, wisdom, and great vision of His Holiness.

Over the last decade or so, we have witnessed China’s increasing power and an escalating belligerence in refusing to engage in any discussion about human rights and democracy. From my official visits as the Sikyong, I have experienced firsthand the effects of the Chinese government’s pressure on governments across the world to distance themselves from the Central Tibetan Administration (CTA), which China accuses as being a “splittist organization.” The enormous pressure exerted by the Chinese government resulted in last-minute cancellations of my meetings or downgrading the contact with lower-ranking officials.

To fulfill my mandate as Sikyong, I formulated new strategies to elevate CTA’s profile and to express our willingness to restore dialogues with China to obtain genuine autonomy for the Tibetan people based on the Middle Way Approach. I met with various foreign government officials in small coffee shops, private offices, and other public locations. I gave priority to substance and relationship-building while making concerted efforts to upgrade protocol and level of meetings whenever I could. Finally, during the last months of my term, I was able to visit the US State Department and the White House as the Sikyong of the CTA, and as the legitimate representative of the Tibetan people. These developments, along with the passage of the Tibetan Policy and Support Act of 2020 by the US Congress, mark a new turn in the relationship between the US and the CTA. I hope our relations with other countries take a similar turn.

I’m committed to ensuring the smooth transition of power to President-elect Penpa Tsering. It is the responsibility of every Tibetan to support him in his global advocacy efforts for Tibet and the Tibetan people. I wish the incoming Sikyong and his Kashag all the best.

I would like to thank my colleagues in both the 14th and 15th Kashag, senior advisors, and the dedicated and hardworking staff of the CTA. We worked together through the historic devolution of political and administrative power from His Holiness the Dalai Lama to an elected Tibetan leadership. Together, we strengthened support for Tibet from various governments and legislatures across the globe. Together, we invested in education, ensured the financial resiliency of the CTA, and the Tibetan refugee community.

I am overwhelmed by a sense of pride to see the growing political engagement whether it be in the general elections or in the public discourse. As the Sikyong, I faced my share of criticism, but I have often mentioned that I am grateful to my critics because their practice of free speech strengthens our young democracy. Nevertheless, each one of us should ensure that our actions are directed towards the greater good and the cause of Tibet. The sacrifices made by our elders and our brothers and sisters in occupied Tibet should guide our efforts, strengthen, and reinvigorate our cause. We must never forget the struggles of Tibetans inside Tibet. We must never forget the 155 Tibetans, of which 133, died from self-immolation.

Many elders have asked me for my opinion on our younger generation. Our youth and the clarity of their vision as Tibetans – even though Tibet is an imagined homeland for many of them – has inspired me deeply. I am a witness to their determination, potential, and their focus on Tibetans inside Tibet who are systemically denied the most basic human rights and dignity. We must support their vision and augment their efforts amongst youth across the Tibetan diaspora for we are only strong if we are united and work as one community.

The cause of Tibet is a litmus test for the world. In a statement released on March 10 this year, the Speaker of the U.S. House of Representatives Nancy Pelosi expressed her support for Tibet and stated that if “we do not stand up for human rights in China due to commercial interests, then we lose all moral authority to talk about human rights in any other place in the world.” I want to express my gratitude and applaud courageous and principled individuals, elected officials, organizations, and the Tibet Supports Groups who continue to advocate for the legitimate cause of Tibet.

The story of the Tibetan freedom struggle is incomplete without acknowledging India, our closest friend. I express my deepest gratitude to this great country and its people for their generosity and continued support for the Tibetan people. India and many other parts of the world are facing an unprecedented global pandemic. On behalf of the Tibetan people, I express our solidarity with the people of India and others around the globe as we battle this pandemic.

As my role as the Sikyong comes to an end, many people have asked me what I look forward to the most. I look forward to spending more time with my family, especially with my daughter, and learning how to beat her at our new favourite online game.

My role as the Sikyong ends today, but my resolve to fight for the Tibetan cause will continue and will remain strong forever. I was born a freedom fighter and I will die a freedom fighter.