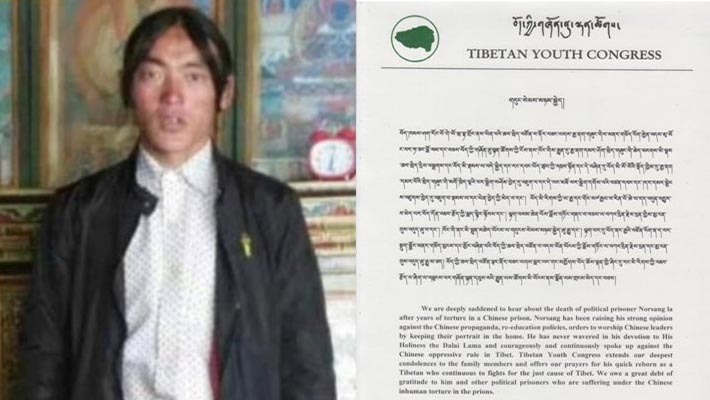 Norsang, around 37-year-old Tibetan man, died in a Chinese prison after years of torture. Other details are unknown due to the Chinese authoritarian regime's tight control over the internet and media in Tibet.

Five Tibetans were released after seven days in Chinese custody on September 27, 2019. But Norsang went missing; nothing is known about him since then, and it was only recently learned that he had died. He died in 2019, but the information was only found out recently, due to Chinese restrictions on the internet and freedom of expression in Tibet.

On May 9, 2021, Tibetan Youth Congress (TYC) issued a statement in solidarity with the former Tibetan prisoner Norsang and other political prisoners who are suffering under the Chinese inhuman torture in the prions.

"We are deeply saddened to hear about the death of political prisoner Norsang la, after years of torture in a Chinese prison. Norsang has been raising his strong opinion against the Chinese propaganda, re-education policies, orders to worship Chinese leaders by keeping their portrait in the home,” mentioned in the TYC’s statement.

“He has never wavered in his devotion to His Holiness the Dalai Lama and courageously and continuously spoke up against the Chinese oppressive rule in Tibet. Tibetan Youth Congress extends our deepest condolences to the family members and offers our prayers for his quick reborn as a Tibetan who continuous to fights for the just cause of Tibet,” said TYC.

“We owe a great debt of gratitude to him and other political prisoners who are suffering under the Chinese inhuman torture in the prions,” the statement concluded.