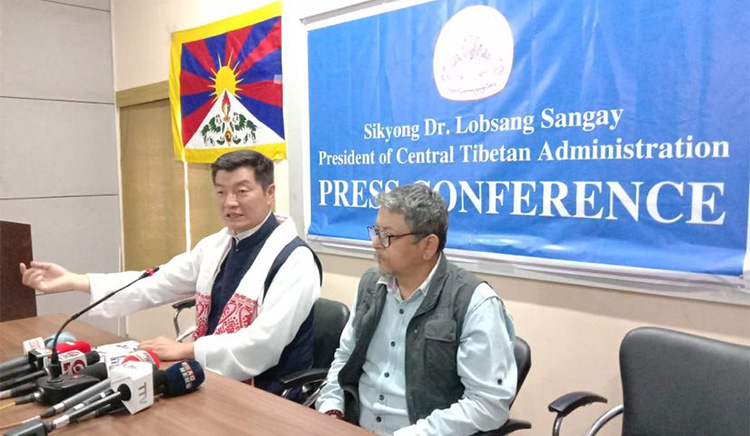 Guwahati, India — "Time has come for the human race to stand up for the Tibet so that the humanity can be safeguarded", said Dr Lobsang Sangay, the president of Central Tibetan Administration (CTA), based in Dharamshala of northern India.

Addressing a press conference in the virtual capital of northeast India, which is adjacent to Tibet, on March 1, 2021, the political leader also urged Indian friends to understand the expansionist theory of Communist China.

Exclaiming that many Indians still prefer to use the term "Indo-China border", the political head of the Tibetan exile government defined that it is the reason why the Chinese troops are on the Indo-Tibetan border. "if most Indians believe that Tibet is a part of China, then there would be nothing wrong for the Chinese forces to be in the international border", Dr Sangay added.

Commenting on a section of India-based media personalities, intellectuals, social activists, politicians, etc who maintain soft corners to the Beijing administration, the energetic Tibetan politician warned that his country had also witnessed similar developments in the 1950s. It finally resulted in capturing Tibet by the Chinese forces and the peace-loving common Tibetan people could do nothing, lamented the CTA president.

“When Tibet was an independent country, only 75 Indian soldiers guarded the entire border as more troops were not a necessity,” stated Dr Sangay adding that, "today the same border needs to guarded by a hundred thousand soldiers as it has dramatically turned into Indo-China border. It becomes a burden for India to enhance the budgetary allocations to safeguard its northern Himalayan border", Sikyong asserted.

The Harvard educated politician, who is going to relinquish the political power to a newly elected CTA chief by June this year, pointed out that," if at all India wants to understand China and the relevant threats, its federal government in New Delhi and over a billon population must understand Tibet first". Dr Sangay emphasized on various pragmatic initiatives including Tibetan study centres in Indian universities so that the misnomer called Indo-China border can be erased.

Dr Sangay reminded that, at least ten major Asian rivers including Indus, Ganges, Brahmaputra, Irrawaddy, Salween, Mekong etc are originated in Tibet. Diversion of water from those rivers by the Chinese agencies to feed a huge volume of water starved population will make severe impacts on the Tibetan ecology. The bordering nations should realise that the scientific preservation of Tibetan ecology is vital for the survival of their people as well, he stressed.

Quoting His Holiness 14th Dalai Lama, the Tibetan political leader extended heartiest praises for the people and government of India said that, no other country could have done as much as the glorious nation had offered. Thousands of Tibetan families are still taking shelter in India where Dr Sangay claimed, they have rebuilt many Buddhist monasteries and cultural institutions, which were already destroyed by the Chinese forces inside their motherland.