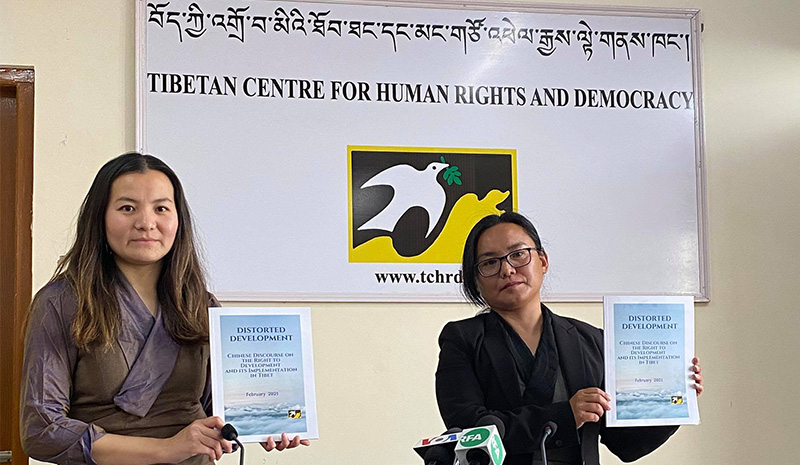 Dharamshala, India – The Tibetan Centre for Human Rights and Democracy (TCHRD) released a new report called “Distorted Development: Chinese Discourse on the Right to Development and its Implementation in Tibet” on February 23, 2021. “Chinese conceptualisation of the right to development threatens to undermine other fundamental political, civil and cultural rights by making them subservient to economic rights” the report stated.

“China's role in international development is growing rapidly. China, self-identifying as an exemplary leader of development, already vigorously exports its development model globally. Indeed, governments worldwide are attracted to what is exported by China as "leap- over development, understood to be a short cut to development and modernity” the report mentioned.

“In such a context, China's influence on development discourses will continue to grow, as will the acceptance of China's definition of the right to development. If China is going to lead international development, the development community needs to properly understand what it is offering” the press statement continued.

The report also highlights Tibetan perspective and approaches to development, and thus dismisses official Chinese rhetoric that portrays Tibetans as uninterested, or apathetic to developing themselves.

To restore the dignity and collective rights of the Tibetan people, and provide meaningful access to the right to development, the People's Republic of China must:

1. Ensure that, first and foremost, the goal of any development policy in Tibet is the meaningful development of the Tibetan people, building upon their customary livelihoods, strengths and capabilities and empowering them to live the lives they want to. 2. Provide disaggregated data and statistics for Tibet and by ethnicity, including the 2020 Census. 3. Implement the recommendations of the Committee on the Elimination of Racial Discrimination (CERD) and Committee on Economic, Social and Cultural Rights (CESCR) in its periodic reviews of China. 4. Stop the forced and coerced resettlement and urbanisation of Tibetans. 5. Halt exploitation and exportation of Tibet's natural resources, both through mineral extraction and creation of wilderness through depopulation. 6. Formulate practical co-managed development policy at the regional local community level, to allow for understanding and respect of local cultural and socioeconomic beliefs and nuances. 7. Halt the construction of megaprojects in Tibet, without proper consultation or consent of the local population, including adequate compensation, royalty payments to local communities and compulsory funding of extraction site rehabilitation. 8. Repeal laws and policies that violate human rights to mother tongue education, language, free speech, religion and belief, fair trial, and peaceful assembly. 9. Implement culturally relevant educational policies or provide a genuinely bilingual education rooted in minority culture by promoting Tibetan as the first language throughout primary and middle schooling. 10. Allow Tibetans to determine and legislate their own educational and cultural affairs as provided for in the PRC's Constitution and its Law on Regional National Autonomy. 11. Allow independent visits by the UN and or other relevant international agencies to assess the quality and availability of mother tongue-based education in schools in Tibet. 12. Adopt a comprehensive anti-discrimination law that protects minority nationalities.