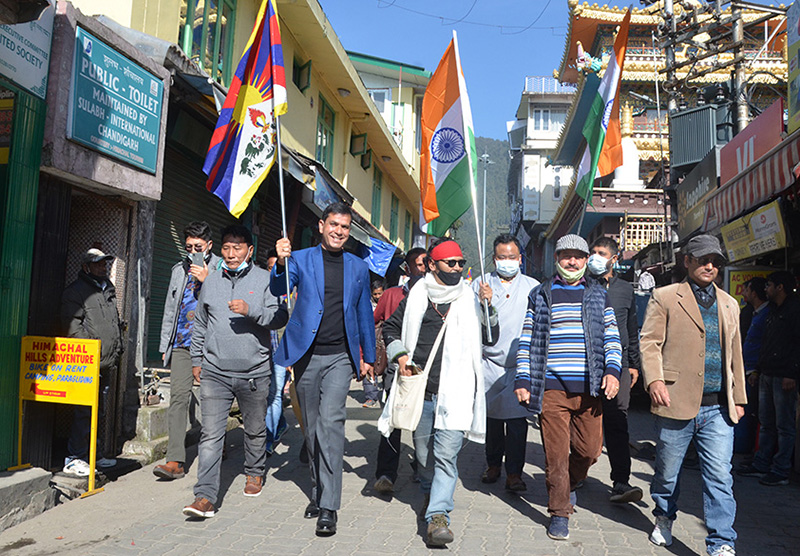 Tibetan activist and freedom fighter Tenzin Tsundue, while he is walking on foot from Dharamshala to Delhi, India's capital on February 12, 2021. Photo:TPI/Yangchen Dolma

Dharamshala, India – “This is a new beginning for Tibet. I request every one to take whatever steps possible in their own capacity. Make this commitment, that we will one day take His Holiness the Dalai Lama back to Tibet,” Tenzin Tsundue passionately remarked before finally starting his journey of 500 miles from Dharamshala to Delhi, India.

On the auspicious occasion of Losar, Tibetan activist and freedom fighter Tenzin Tsundue left for the National Capital of New Delhi, on foot. A brave journey of 500 miles, named ‘Walk a Mile for Tibet’, began on February 12, 2021, and will end in Delhi on March 10, 2021, the day commemorated as the Tibetan National Uprising Day. The objective of this one-man march is to raise awareness and educate the Indian masses about the Tibetan issue and how crucial it resolves to restore peace to the Indo-Tibetan border between India and China.

The march kicked off on McLeod Ganj in Himachal Pradesh, Shri Ajit Nehria, the President of the India Tibet Friendship Society (ITFS) and Gonpo Dhondup, the President of Tibetan Youth Congress present at the occasion, as well as around a hundred people gathered there to send off the Tibetan activist. “Tibet’s freedom, India’s security, a phrase we have often heard, but never understood until now,” said the President of the ITFS. He maintained in his short speech that Tibet’s freedom is crucial to India’s integrity and security from the continued Chinese aggressions all across the border.

Talking about his initiative, Tenzin Tsundue also addressed the gathering and spoke passionately from his heart. “I was born in India and therefore consider myself as an Indian as well as a Tibetan. Therefore, I have a double duty to ensure that China receives a fitting reply for all its wrongdoings”, said Tsundue, maintaining that Indians are not fully aware of the causes behind many of China’s aggression, and that is due to a lack of knowledge about the Tibetan Issue. He aims to raise as much awareness as he possibly can in the next month, and reach Delhi on the occasion of the National Tibet Uprising Day, the day when tens of thousands of Tibetans took to the streets in rebellion against Chinese oppression in 1959. “This is a new beginning for Tibet. I request every one to take whatever steps possible in their own capacity. Make this commitment, that we will one day take His Holiness the Dalai Lama back to Tibet,” Tsundue passionately remarked before finally starting his journey of 500 miles to Delhi.

‘Walk A Mile For Tibet’ is an initiative taken by Tenzin Tsundue, a Tibetan activist of international renown. In this initiative, Tsundue will walk almost 500 miles from McLeod Ganj to New Delhi, crossing cities like Mohali, Chandigarh, Ambala, Karnal, and Sonipat en route. The main objective of this initiative is to raise awareness and educate the Indian people about the Tibetan Issue, how its resolution is the only solution to India’s struggles with China and why India must repeal its ‘One China Act’ and recognise Tibet as a separate nation.

1. As a matter of principle, it is wrong for any country to undermine the sovereign status of another country, especially when happens to be an occupied country. Accepting One-China policy is the endorsement and recognition of the illegal Chinese occupation of countries like Tibet, East Turkestan, Manchuria, Southern Mongolia, and Taiwan. India and Indians have suffered so much under British occupation. Morally, India and Indians should never endorse or recognise the illegal occupation of any other country in this world.

2. China continues to stake claim over Indian territories in Arunachal Pradesh, parts of Ladakh, Himachal Pradesh, Uttarakhand, and Sikkim. It often raises the Kashmir issue in the UN to needle India. It has always sided with and supported Pakistan in international fora. Since China has never endorsed a One-India Policy, why should India continue to adhere to its One-China policy?

3. In 1947, when India became independent, Tibet was also an independent country. The Chinese invasion of Tibet began in 1950. In 1954, India started to recognise Tibet as part of China. This was a colossal geopolitical mistake. When Tibet was independent, it served as a buffer zone between India and China. Now, with China as its neighbour, India is constantly exposed to the onslaughts of the Chinese People’s Liberation Army. Incidents like Doklam and Galwan have become regular events. Repealing One-China policy is in the interest of India's geopolitical security as it negates the very existence of a Sino-Indian border and supports the restoration of the erstwhile Indo-Tibet border which was always free of tension and conflict because Tibet has always been a friend, ally and well-wisher of India, unlike China.

4. Due to China’s aggressive posture towards India and its active support of Pakistan, a huge chunk of India’s annual budget is spent on its military (approx. $55 billion in 2021). If India is free of this menace on its border, it can dedicate all these funds and its full attention to national development.

5. China is India’s number one and most powerful enemy. It is actively destabilising India through its overt border attacks and covert financial and material support for Pakistan. It is trying to encircle India through its String of Pearls and Belt and Road initiatives. If India wants to checkmate China, it too should use its Brahmastra or its checkmate move to stall China's aggressive advances - reject One-China policy and recognise Tibet’s independence.