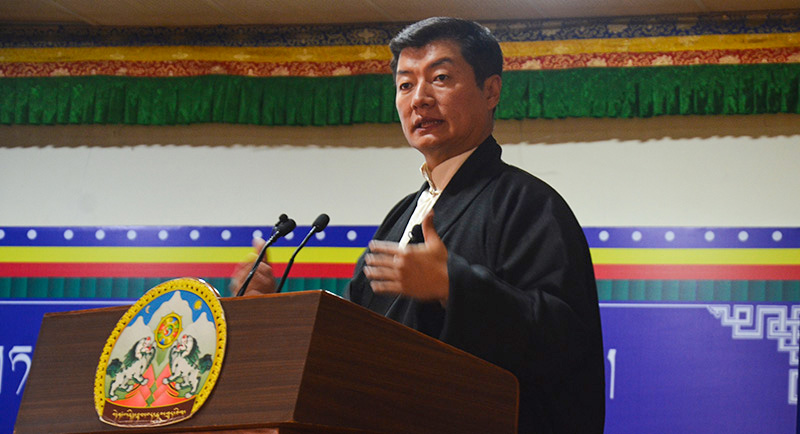 Dharamshala, India – The Central Tibetan Administration (CTA) released a statement on February 6, 2021 regarding China’s accusation on the Tibetan Policy and Support Act 2020 of the United States government. CTA strongly rejected the accusations and defined it as nothing but a frail attempt to represent the voice of the people, and merely give out the illusion that China is a democratic nation.

After the United States government enacted TPSA in 2020, China expressed its strong indignation and firm opposition to the passing of the US act on Tibet. Under the Tibetan Autonomous Region, the governing body formed by China is known as the ‘People’s Congress of Tibet Autonomous Region’ and it alleged that the Tibet bill grossly interferes in China’s internal affairs and violates the fundamental principles of international law.

In a response to these accusations, the Central Tibetan Administration published a report, clearly stating that they reject these accusations and explained how China makes decisions for the Tibetan people without any real participation from them. “It is a common fact that the Tibetan people have no meaningful participation in the deliberations of ‘People’s Congress of TAR’ or its decision making. On the contrary, Tibetans are afforded such positions only to rubber-stamp Communist Party decisions,” the statement said.

The report also talked about the reason for the formation of TPSA and why it needed a major revision after its formation in 2002. “The Tibetan Support and Policy Act of 2020, which is a major revision encompassing substantive issues of Tibet to the Tibetan Policy Act of 2002, addresses the urgent, deteriorating human rights, religious freedom, and environmental and other challenges faced by the Tibetan people inside Tibet,” noted the statement.

“The deteriorating human rights situation in Tibet amounts to cultural genocide and suppression of rights under the guise of developmental policies such as urbanization, economic and environmental development, and the politicization of the sacred traditional system of the reincarnation of religious leaders, including His Holiness the Dalai Lama. These exacerbated conditions in Tibet and China’s failure to solve the fundamental problem facing its illegal occupation of Tibet in over more than 60 years have compelled the enactment of the Tibetan Policy and Support Act,” the statement affirmed.

In the report, CTA also addressed Tibet’s historical past and emphasized the fact that Tibet was never a part of China and remained an independent nation until invasion by the Chinese liberation army in 1949-59. “The Chinese military takeover constituted aggression against a sovereign state and a violation of international law. Today’s continued occupation of Tibet by the PRC government, with the help of several hundred thousand troops, violates international law and the fundamental rights of the Tibetan people,” the statement explained.

CTA stated that China’s attempt to discount the US act has failed to convince nations worldwide, and especially Tibetans living inside Tibet. The administration also explained how it is the Tibetans who have been the direct victims of China’s “iron-clad rule”. “China’s own atrocious track record in trampling upon the human rights of the Tibetan people, the increasing attempts to undermine the Tibetan religious freedom and the appalling state of language rights is a testament to its misrule in Tibet. This naturally invalidates its own arguments,” the CTA statement mentioned.

The Middle Way Approach proposes coexistence between the Tibetan and Chinese people. The CTA talked about this approach in their report and how much support it has gotten from parts of the world. “Envisioned by His Holiness the Dalai Lama and adopted by the CTA as the official policy towards restoring freedom for Tibetans in Tibet, there is now a growing chorus of support from all corners of the world for this nonviolent and solution-oriented approach of the Tibetan people and their legitimate rights to chart their own future and to pursue their aspirations. With the inclusion of the Middle Way Approach in the TPSA, the US has set an important precedent for other countries to address the Tibetan people’s struggle for freedom,” the statement said.

In the end, the subject addressed by the CTA was that of the need to preserve Tibetan culture and combat disinformation. They also explained why they felt the need to address these issues at hand in a report. “We felt it necessary to address these issues in a concise report shedding light on the traditional origins of Tibetan Buddhist reincarnation system, the rampant human rights violations in Tibet and the ongoing destruction of Tibet’s ecology.

The ongoing global pandemic has exposed that China’s restriction on free flow of information and lack of transparency is not a mere ‘internal matter’, but has consequences of global magnitude. This report serves as a reminder, once again, to the PRC government that the CTA will continue to speak truth on behalf of the Tibetans inside Tibet whose voices remain muzzled by its repression,” the CTA concluded.