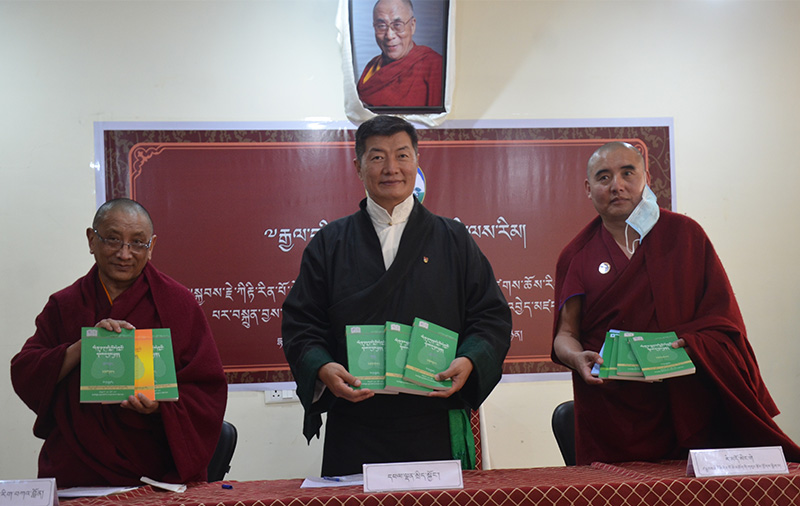 Dharamshala, India – Dr Lobsang Sangay, president of Central Tibetan Administration (CTA) unveiled the second publication of a textbook composed by Kasur Kirti Rinpoche, named The Necklace for Intelligent Students, on January 29, 2021. It was launched by the Department of Religion and Culture, CTA in observance of the Year of Gratitude to His Holiness the Dalai Lama.

After displaying the textbook in the presence of Karma Gelek Yuthok, Minister for Department of Religion and Culture, Ven Redo Sangay, a teacher of literature and art at Kirti monastery, the Ministers of respective departments of CTA, Sikyong addressed the gathering. He admired the initiative taken by Kirti Rinpoche and his institution for launching textbooks that give lessons on important topics like human ethics and values. He further pressed the importance of having such books as academic subjects, considering the increasing epidemic of depression and anxiety among young adults.

“Because the youth culture is incredibly influenced by mottos such as YOLO (You Only Live Once), that encourages them to live the life to the fullest and they are often pushed into embracing bad choices that are detrimental to them,” mentioned Dr Sangay and further added that the present generation and the next generation will highly benefit from Kirti Rinpoche’s textbooks.

Speaking about the objectives of the textbook, Kalon Karma Gelek Yuthok explained that the focus should not only be on achieving modern education, but also in strengthening traditional education that has been deep-rooted in their Tibetan culture for ages. He further elaborated on His Holiness’ advice to the Tibetan students that they must learn the essentiality of the wisdom of morality in addition to the development of mental faculty.

The first publication of this textbook was unveiled by His Holiness the 14th Dalai Lama in 2019, at the 25th founding anniversary of Kirti monastery in Dharamshala.