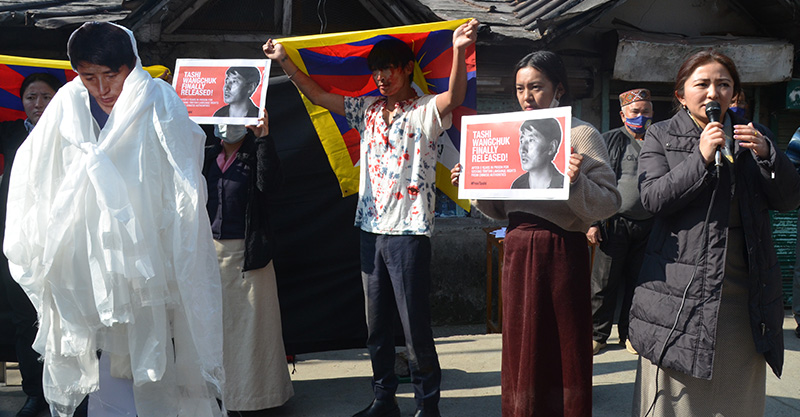 To celebrate the release of the language rights advocate, Tashi Wangchuk, SFT India organised a street play, at main square, Mcleod Ganj, Dharamshala, on January, 2021, describing the events that occurred before and after Tashi was detained. Photo:TPI/Yangchen Dolma

Dharamshala, India — “Tashi Wangchuk is released, yet he is not free as his actions will be surveilled and rights will be repressed,” said Rinzin Choedon, Tibetan Activist and National Director at Students for Free Tibet (SFT)-India. The Tibetan language rights activist was released on January 28, 2021 after serving a five-year term in prison for standing up against the ‘repression’ of the Tibetan language education in occupied Tibet.

Chinese lawyer Liang Xiaojun tweeted that Tashi was taken to his home in Yushu, Qinghai province in eastern Tibet and was in good health. Although, Liang was unsure if Tashi was ‘fully free’ as yet. “We are relieved that he is no longer behind the bars and call for an investigation into his unfounded prosecution, his allegations of torture in detention and demand that he be fully compensated for his unfair and politically motivated imprisonment,” mentioned the lawyer. “We are concerned for Tashi Wangchuk’s safety and well-being, warning his sentence continues with a five-year deprivation of political rights which means he will not have the rights to free expression, association, assembly, publication, vote and to stand in elections,” he further added. (Criminal Law of the People’s Republic of China).

To celebrate the release of the language rights advocate, SFT India organised a street play, at main square, Mcleod Ganj, Dharamshala, on January, 2021,  describing the events that occurred before and after Tashi was detained. “He is a Tibetan hero who risked everything to bring out the systematic destruction of the Tibetan language by Chinese Communist Government. There are many other language rights advocates like Tashi who have been imprisoned for simply exercising their rights,” said Rinzin Choedon, the National Director of SFT-India. “We will continue at all levels for pushing Tashi’s rights to be upheld and for the immediate release of all other political prisoners,” she affirmed.

“We urge governments to speak up about China's treatment of Tashi Wangchuk and all Tibetan Human Rights defenders and to press Chinese leaders to stop using ‘separatism’ to lock up Tibetans who peacefully advocate for their human rights. Governments must take strong, assertive action calling for all his human and civil rights to be upheld following his release,” mentioned Tenzin Phakdon, grassroot director of SFT. She highlighted that Tashi has committed no crime and was sentenced to five years of ‘unjust imprisonment’ for peacefully calling for the right of Tibetans to learn their language.

Tashi Wangchuk, a shopkeeper from Kyegundo in the eastern Tibetan region of Kham, came into spotlight after giving an interview with the New York Times where he expressed his concerns about the ‘erosion of Tibetan language in Tibet’. Following the interview, a documentary was released by the Times, where he was seen travelling from Tibet to Beijing to file a formal complaint about ‘China’s failure to support Tibetans’ right to Tibetan language education’. Tashi promoted his idea in compliance with the Chinese constitution that guaranteed and secured the right for children in Tibet to learn the Tibetan language.

In 2016, he was detained by the Chinese authorities for allegedly ‘inciting separatism’ and suffered ‘inhuman treatment’ and was subjected to ‘arduous interrogations’. His ‘right to a free trial’ was grievously violated by denying him the right to see his lawyer pre and post-trial. Human rights lawyer Lin Qilei also tweeted that on 27th April 2020 and June 19th 2020, Tashi’s access to legal representation was blocked by the Chinese authorities stating the reason of Covid-19, despite the area having zero active cases reported.

According to an EU Beijing statement, Tashi Wangchuk’s case had been raised by multiple governments and human rights experts. In March 2018, six UN experts expressed serious concern over the ruling by a Chinese court to uphold charges of “incitement to separatism” and called for all charges levelled against Tashi Wangchuk to be dropped. According to a Human Rights Watch Report, China describes its language policy for Tibet as ‘bilingual education’ wherein Tibetan language schools have been forced to learn only Chinese. This plan is being designed to ‘stamp-out’ the next generation of Tibetan speakers in an attempt to eliminate the Tibetan identity.

A Human Rights Watch report highlights that Tibetan citizens have expressed their growing concerns about the increasing loss of fluency in Tibetan among younger generations, due to the changing policies. An urgent action launched on 18th January, called on Vice Premier of PRC Sun Chunlan and Education Minister Chen Baosheng to immediately reinstate Tibetan language education and make it available to students at each stage of their learning.